There Is No Theme To This Quiz

"The Man with One Red Shoe" (1985) starred Tom Hanks and Dabney Coleman. It was a remake of a 1972 French film. Hanks plays a concert violinist who is mistakenly thought to be a secret agent.
2. The Horsemen of the Apocalypse

The Four Horsemen are described in Chapter 6 of the Book of Revelation. They are War, Death, Pestilence, and Famine. Each horseman rides a different colored horse.
3. Lincoln's 1863 address that uses the word "score"

"The Gettysburg Address" begins with the phrase "Four score and seven years ago" (or 87 years ago). The address was given at the dedication of a military cemetery in Gettysburg, PA. Lincoln was not the main speaker that day--the featured speaker was Edward Everett.
4. Mythical creature such as "Puff"

"Puff the Magic Dragon" was written by Leonard Lipton and Peter Yarrow. The song was released by Peter, Paul, and Mary in 1963 and reached Number Two on the Billboard Hot 100 chart. An animated television special based on the song was released in 1978.
5. A roadside attraction in Dillon, SC

"South of the Border" is located just off Interstate 95 in Dillon, SC. Including restaurants and a miniature golf course, the attraction may be best known for its fireworks sales. South of the Border dates back to 1950.
6. 2012 Disney film starring Merida

"Brave" is set in Medieval Scotland and stars Kelly Macdonald as Princess Merida. The music for the film includes bagpipes, Celtic harps, and an electronic dulcimer. "Brave" won the Academy Award for Best Animated Film.
7. Portrayed "The Doctor" from 2010-2013

Matt Smith (born 1982), an English actor, portrayed "The Doctor" on the long-running BBC show "Doctor Who" from 2010-2013. His companions included Amy Pond and Clara Oswald. His Doctor often wears bowties, calling them "cool".
8. Street name or victim of a "Dutch" disease

Dutch Elm Disease is caused by Sac Fungi. It first appeared in the early 1900s. It caused a great drop in elm tree populations in certain areas.
9. Loses to Paper, beats Scissors

The game of Rock, Paper, Scissors, or "Rochambeau" calls for two players who simultaneously make one of three gestures with a hand. Paper (an open hand) wraps around Rock and beats it. Rock (a clenched fist) smashes Scissors and beats it. Scissors (a v made with the pointer and index fingers) cuts Paper and beats it.
10. A character, an album, a movie, a musical--all tied to The Who

"Tommy" the studio album was released by the Who in 1969. "Tommy" (the movie) was released in 1975 and starred Ann-Margaret. "The Who's Tommy" appeared on Broadway in 1993. All three tell the story of Tommy Walker.
Source: Author bernie73 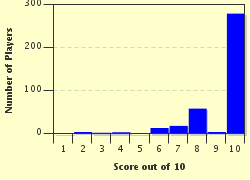