About Some Countries Trivia Quiz

Based on the clues given, can you figure out facts about the country?

The word "argentum" means "silver" in English. Variations of the name Argentina have been used at least since the 17th century.
2. The United States' Mauna Kea Volcano is found in which famous holidaying islands?

The volcano is a dormant one, but is often visited by tourists. Hawaii is the 50th state of the US.
3. Which country's capital has a name meaning "peace"?

Bolivia's administrative capital is La Paz. La Paz is comprised of seven primary districts.
4. Which country was formed after splitting away from a union with Serbia?

Montenegro is found in Southeastern Europe. It lies along the Adriatic Sea to one side. Montenegro borders Albania, Bosnia and Herzegovina, Croatia, Kosovo, and Serbia.
5. The Republic of Zaire in Africa changed its name to what?


Answer: Democratic Republic of the Congo

The Democratic Republic of the Congo went by the name Zaire from 1971-1997. The Congo is known for its rain forests, national parks, and native animals (such as the okapi and white rhino).
6. Which country's name means "two seas" in Arabic?

The Kingdom of Bahrain is an island nation located in the Persian Gulf. Bahrain is also known as "the land of pearls", due to its high-quality pearl trade.
7. Which of these countries was part of the Union of Soviet Socialist Republics (USSR)?

The USSR was comprised of the later-independent countries of Armenia, Azerbaijan, Belarus, Estonia, Georgia, Kazakhstan, Kyrgyzstan, Latvia, Lithuania, Moldova, Russia, Tajikistan, Turkmenistan, Ukraine, and Uzbekistan.
8. The downs grasslands are found in which of these countries?

Downs are Australia's grasslands. The grasslands stretch over the Murray-Darling Basin.
9. The famous Christ the Redeemer statue is located in which country?

The statue is located in the city of Rio de Janeiro. The statue is 130 feet tall. It was built between 1922 and 1931.
10. Choose the lake that is a primary source of water for the Niagara Falls, which are shared by the countries of Canada and the US.

Lake Erie is one of the Great Lakes of North America. Lake Erie drains through the Niagara River and Falls.
Source: Author yashodhan 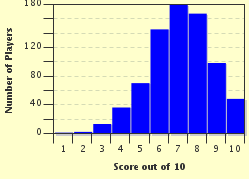 
Other Destinations
Explore Other Quizzes by yashodhan