Lilliputians rejoice! This is a quiz about the world's tiniest countries. These specks-on-the-map are among the world's most interesting and exotic locations.

Quiz Answer Key and Fun Facts
1. Located in the Pyrenees Mountains, this tiny country's official language is Catalan, but French and Spanish are also commonly spoken.

A scenic, mountainous country, tiny Andorra (181 sq. mi., 471 sq. km) is bordered by France on the north and Spain on the south. Catalan is a romance language sharing similarities with both French and Spanish. It is Andorra's official language and is also spoken in parts of northern Spain and southern France.
2. Marking the boundary between the Caribbean Sea and the Atlantic Ocean, the Lesser Antilles are a string of islands making up several small nations. Which of these Lesser Antilles nations is the tiniest?

The Caribbean contains many very small nations. But with a total area of 101 sq. mi. (261 sq. km), the two islands comprising the Federation of St. Kitts and Nevis make the country the smallest in the Lesser Antilles. Unlike most countries in this region, St. Kitts and Nevis' economy is supported more by agriculture than by tourism.
3. In 2000, this South Pacific island nation made tech-world headlines for leasing its domain name for 50 million U.S. dollars. It is also slowly sinking into the ocean.

According to USA Today, the entire Tuvalu land mass, nine slender South Pacific islands and atolls, is sinking... and is apparently doomed to ultimately sink beneath the ocean. Tuvalu might then leave a legacy imagined only in science-fiction novels. It could become the first virtual nation... a country that exists only on the internet. If Tuvalu's land disappears, its population will disperse, yet Tuvalu, under international law, will remain a sovereign nation even though its only "real estate" will be the ".tv" internet domain.

As of 2004, Tuvalu had a land mass of 10 sq. mi. (26 sq. km). Nauru and Vanuatu are other South Pacific island nations. Atutuvu is totally fictitious.
4. With an economy that is totally dependent on tourism, this wee European nation is known for its elegant casino, spectacular scenery, princes and princesses.

Located on the Mediterranean Sea and bordered entirely by France near the France /Italy border, Monaco has a population of just 32,000 and an area of just two sq. km (less than one sq. mile). Its famous Monte Carlo Casino, sunny beach and elegant atmosphere has made Monaco a popular destination of Europe's elite.
5. Of the world's nations having a population over one million, which is the smallest in area?

Singapore is an Asian country, city and island located on the southern tip of the Malay Peninsula. With a population of well over five million crammed into 267 sq. mi. (697 sq. km), it is among the world's most densely populated countries. Bahrain and Fiji have populations of under a million. Bahrain, Fiji and The Gambia are all larger in area than Singapore.
6. This island country is located in the Indian Ocean, southwest of India. It consists of 1190 islands, only 198 of which are inhabited, and none of which is larger than five square miles (13 sq. km) in area.

Even though its developing tourism industry is a large part of its economy, the Republic of Maldives remains one of the world's poorest countries. This long narrow cluster of tiny islands stretches north-south and spans a distance of over 500 miles southwest of India.
7. Although its area is just 62 square miles (161 sq. km), and it has a population of just 33,000, this tiny Alpine country regularly fields medal-winning athletes at the Winter Olympics.

Liechtenstein is situated on the Rhine River between Switzerland and Austria. It's breathtaking views and ski resorts make it a popular tourist destination. As of 2004, Liechtenstein had won a total of eleven medals at the Winter Olympics (all in skiing events), including three gold medals won by Hanni Wenzel at the 1980 Lake Placid games. Due to low taxes, many international corporations are headquartered there. Foreign workers comprise 60 percent of Liechtenstein's work force.
8. The world's smallest country is also the world's only country where Latin is the official language. Which country is it?

Located in the heart of Rome, Vatican City (Holy See) is the spiritual and administrative capital of the Roman Catholic Church. With an area of just 108.7 acres (about 0.4 sq. km), and a population of under 1000, Vatican City is easily the world's smallest autonomous state. Monaco and San Marino are the world's second and fifth smallest countries respectively (Nauru and Tuvalu are third and fourth.).
9. Which of these small landlocked African countries is completely surrounded by the Republic of South Africa?

Once called Basutoland, Lesotho is completely surrounded by South Africa, although the two are separated by mountain ranges. Swaziland is bordered mostly by South Africa, but shares some of its eastern border with Mozambique. The other two choices are landlocked African countries which do not border South Africa.
10. At just eight square miles (21 sq. km), this teensy South Pacific island nation is so small, it has no official capital. A century of mining has stripped four-fifths of its land.

Yaren is the largest city in population and is often considered the capital.

The type of phosphate rock mined in Nauru consists of limestone and bird droppings. So, essentially, Nauru's economy is dependent upon bird poop. Unfortunately, the phosphate supply is nearly exhausted and the island has become an ecological nightmare. Mining has nearly ceased. Most of the island been stripped of vegetation as a result of the mining and Nauru faces a bleak future.
11. This tiny Middle East island country is located in the Persian Gulf... just off the Saudi Arabia coast. It has an area of just 257 square miles (668 sq. km).

Bahrain is somewhat enigmatic in this region of the world. This Islamic country's economy is partially supported by oil processing and refining, but tourism, aluminum smelting, banking, and other industries make Bahrain's economy much more diversified than most of its Middle East neighbors. The other choices are all much larger and none are islands.
12. This South Pacific island nation is known among philatelists for being the first country to issue a self-adhesive postage stamp.

Tonga's tropical climate made the use of self-adhesive postage stamps a matter of practicality. The adhesive on lick-and-stick stamps could be activated by the high tropical humidity, causing them to stick together. Tonga issued the first self-adhesive stamps in 1963.

The most famous of these stamps was in the shape of a banana. The US did not begin experimenting with self-adhesive stamps until 1974. Today, they are the standard. At 289 sq. miles (751 sq. km), the Kingdom of Tonga is one of the world's tiniest nations.
13. Bordered by Germany, France and Belgium, this diminutive country has an area of only 998 square miles (2595 sq. km).

Its economy is based largely on banking and insurance, and Luxembourg is a very prosperous European country with a per capita GDP of $48,000 U.S. dollars. Luxembourg boasts a flourishing economy and a beautiful landscape scattered with small rural villages one might associate with fairy tales.
14. Which of these tiny island nations is NOT located in the Indian Ocean?

The Solomon Islands are located in the South Pacific, just east of Papua New Guinea and just across the Coral Sea from Australia. In Western history, they are perhaps best known as the site of the Battle of Guadalcanal and other WWII battles. Comoros, Seychelles and Mauritius are all located in the Indian Ocean, just off the African continent.
15. Which of these choices has the smallest land area?

The data in this quiz came from The World Almanac and Book of Facts 2004 and www.lonelyplanet.com.
Source: Author wildebeest 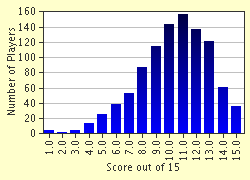 
Other Destinations
Explore Other Quizzes by wildebeest