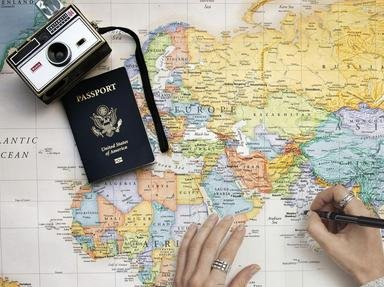 This would be any cat lover's dream vacation. All of these places involve cats in some way. Thanks to kyleisalive for the idea!

Quiz Answer Key and Fun Facts
1. The world's most well known (half) cat. This Egyptian sculpture has at one point lost its nose. What statue might this be?

The Great Sphinx of Giza, most commonly known as the Sphinx, is a creature that has a lion's body and a human head. There is much debate as to how the Sphinx lost its nose. One theory suggests that it was one of Napoleon's cannonballs that destroyed the nose.

However, one drawing of the Sphinx, created before this would have happened, shows the Sphinx already without a nose. Another popular theory is that one man was so outraged that he destroyed the nose, and was hanged for vandalism. The Sphinx was named after the creature in Greek mythology who strangled anyone who did not solve her famous riddle.
2. This country has a flag that is white on the left side, and about one third of the way to the right side, there is a zigzagging pattern, where it then becomes maroon. Its capital is Doha, and it is an Arab Emirate. What "kitty sounding" country might this be?

Qatar became an independent state in 1971. It is a small peninsula in the Persian Gulf. It borders Saudi Arabia. There is also a very close, and very small, island neighbor in the gulf, which is that of Bahrain. Although Qatar seems to have a feline in its name (as often pronounced by non-natives), it does not mean "cat". Qatar means "the peninsula" in Arabic.
3. This city in Malaysia means "cat" in Malay. It is the capital of the state of Sarawak, and it is nicknamed Cat City. There is even an entire museum dedicated to these furry little feline friends! What city might this be?

Kuching became a city in 1988. The Kuching Cat Museum was founded in 1993. The museum is based around cats, but includes all things feline, including a pamphlet from the musical "Cats!" I've been told it is actually quite boring.
4. There are two main rivers that make the borders of Mesopotamia. These rivers were two of the four main rivers of Eden. One of them is Euphrates. Now tell me what the other catlike river is. (I'll give you one last hint. This river is not a housecat.)

The Tigris flows from the mountains in Turkey and flows through Iraq. Both the Tigris and the Euphrates were important in the Bible. Each were of the four main rivers of Eden, the other two being Gihon and Pishon. However, it is interesting to note that the Tigris, in Genesis 2:14, is called the Hiddekel. Tigris means "tiger" in Greek.

A tiger is, of course, a big cat. That is why it is in the quiz!
5. This "kitty city" is located in the country where you can find the highest mountain in the world. It does not mean "cat" in its own language, but it does sound like it has the word "cat" in it. What city might this be?

Kathmandu is the capital of Nepal. It was established in the 8th century. Not only is it the capital city of Nepal, it is also the largest. Mount Everest is located at the border of Nepal and China. It is found in the Himalayan mountain range. It can also be spelled Katmandu, Cathmandu, and Catmandu. Khartoum is the capital of Sudan, and the other two are made up, although there is a Phnom Penh in Cambodia.
6. This small North Carolina city is famous because of two people. These two people's invention went "sky high", and was one of the most important inventions of all time. Not only is there a cat in this city's name, there is a bird. What city might I be babbling on about that has a cat name? I want the current name of the city, not what it was once called. Remember, it has to have a cat name!

Kitty Hawk is where the Wright brothers first took flight in an airplane in 1903. Orville and Wilbur Wright chose the location because it would not pose a threat to anybody, and if it failed, the landing would be somewhat smooth. The sand would cushion the blow of an airplane crash--somewhat. Who would want to test a plane in the busy streets of New York?

Kitty Hawk was once known as Chickahawk. Its sister city is Coulaines, in France.
7. This country in west Africa means "Lion Mountains". Its second largest city is Bo, and it borders both Liberia and Guinea. What country might this be?

Sierra Leone gained full independence in 1961. Its official language is English. The capital and largest city is Freetown. The country's motto is "Unity, Freedom, Justice". Cote D'Ivoire is the Ivory Coast, and Mont Leone and Tierra del Tigre do not exist, although there is a Tierra del Fuego (island of fire), and "mont" is used in many names, such as Vermont (green mountains) and Montana (mountain).
8. There is only one province in Canada that has a cat right in its name. Well, it is a variation of "cat" anyway. I won't give away too much, but I will say it borders Manitoba. What province might this be?

Saskatchewan's largest city is Saskatoon, and its capital city is Regina. There is also a river named the Saskatchewan River. Prince Albert, Moose Jaw, and Yorkton are other important cities in Saskatchewan.

AnneBonney (FunTrivia user) would be very disappointed if you spelled Saskatchewan wrong. That's a big pet peeve of hers. ;-)
9. This community of Spain borders France, and its capital is Barcelona. Two of its three main languages are Spanish and Aranese. The third bears the name of the community. What place in Spain bears a "kitty" name?

The third main language of Catalonia is Catalan. Catalonia, or Catalunya, is found in the Northeastern part of Spain, and borders Valencia, another community in Spain. It also borders Andorra, France, Aragon, and the Mediterranean Sea. Catamarca is a province of Argentina, Catania is a city in Italy, and Catacamas is a city in Honduras.
10. Where is the Cat River located? I will give you a hint...It is in a state of the United States that starts with M. Did that help? Name the state.

Minnesota is in the Midwestern region of the US. Its capital is St. Paul. It is called "Land of 10,000 Lakes". The Cat River is only one of many found in the "cap" of the US "gnome". The gnome is a series of states whose borders along the Mississippi River seem to make the shape of a gnome, or an elf.
Source: Author salami_swami 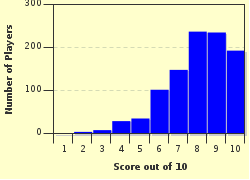