What do you know about Afro-American history in this county near Washington, DC?

Share on Facebook
Share on Twitter
Share by E-Mail
Author
severnriver
Time
5 mins
Type
Multiple Choice
Quiz #
275,539
Updated
Dec 03 21
# Qns
10
Difficulty
Tough
Avg Score
5 / 10
Plays
668
Awards
Top 20% Quiz
This quiz has 2 formats: you can play it as a or as shown below.
Scroll down to the bottom for the answer key.

Quiz Answer Key and Fun Facts
1. Prince George's County, Maryland, is a very important county to the African-American community. Which of these is NOT a factor in it being important?

Sugar Ray Leonard grew up in Palmer Park, Maryland, which still had a boxing studio in 2007. Leonard was a talented boxer as a teenager, and he earned a Golden Gloves championship before entering Parkdale High School in the mid-1970s.
3. Which presidential candidate spoke in Laurel, Maryland, and almost caused a race riot with his segregationist rhetoric?

The ex-governor of Alabama, George Wallace, spoke at a rally to a crowd of both whites and blacks. His words were inflammatory, and some people in the crowd grew angry. In fact, he was shot at that rally, but the gunman (Arthur Bremer) was motivated not by politics but by personal ego, according to Wikipedia.
4. What university started in a church in Baltimore, serving freed slaves, and later moved to a site in Prince George's County?

After moving to Prince George's County, this school specialized in training African-American students to be teachers. It is situated on approximately 187 wooded acres in Bowie, Maryland, and it now offers many different degrees to a diverse student population.
5. What famous entertainer spoke in Prince George's County in November, 2007, urging the attendees to fight for racial progress in the United States?

According to the Washington Post, Belafonte decried the fact that "there are more jail cells than classrooms" in the United States.
6. What is the largest African-American church in Prince George's County?


Answer: schools were desegregated by busing

Court-ordered busing to desegregate the county public schools began in 1973. Schoolchildren, both white and black, were bused from their neighborhood schools in order to change the same-race composition of many schools.
9. What school is named after a WWII African- American aviator?

Charles Herbert Flowers, Jr. was a Tuskegee airman who lived in Prince George's County. The school, named in his honor, has a science and technology program and an Air Force ROTC program.
10. What is the oldest planned African-American community in the Washington area?

According to a Prince George's County board of education publication, Fairmont Heights was started in the early 1900s by two men who purchased 50 acres and laid them out in lots for African-Americans to buy. The town was later incorporated in 1935.

I hope you enjoyed this quiz- and please leave a rating (at the bottom right of the screen). Thanks!
Source: Author severnriver

This quiz was reviewed by FunTrivia editor bloomsby before going online.
Any errors found in FunTrivia content are routinely corrected through our feedback system.
Most Recent Scores
Jan 26 2023 : Guest 83: 4/10
Jan 03 2023 : Guest 173: 0/10 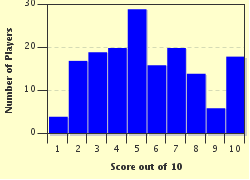 
Other Destinations
Explore Other Quizzes by severnriver