To follow is a list of "firsts" performed by women. Can you match the women to the corresponding accomplishment?

The Women's Marathon was introduced at the Los Angeles Summer Olympics in 1984.

Joan Benoit was born in Maine in 1957. She originally took up long distance running to help her recovery from a broken leg sustained while slaloming.

In March of 1984 Joan injured her knee in training and had to undergo arthroscopic surgery seventeen days before the women's Olympic Marathon trials. She won the trial, and three months later the Olympic Gold medal.
2. First woman to achieve a Ph.D degree

Elena Lucrezia Cornaro Piscopia was born in Venice, Italy in 1646. Her father was of noble birth, but her mother was not.

Elena showed an early aptitude for study. She learnt Latin, Greek, Hebrew, Spanish, French, Arabic, and Chaldaic languages. She was also taught grammar, mathematics, astronomy, theology, philosophy and science. She was an accomplished singer and musician, being able to read and write music. She played the harpsichord, clavichord, harp, and violin.

Her father encouraged her to further her education and she went to the University of Padua where she studied Theology. The Roman Catholic Church at the time did not want a woman to receive a Theology degree, so she was allowed a Ph.D in Philosophy instead.
3. First President of American Red Cross

Clarissa "Clara" Barton was born in 1821 in North Oxford, Massachusetts.

During her life she was a teacher, a patent clerk and a self-taught nurse.
She worked tirelessly through the American Civil War, nursing the sick, organising and distributing supplies, cleaning field hospitals and even working on the front lines to help with the injured.

In 1869 while travelling in Switzerland she met Dr. Appia who introduced her to the Red Cross and later invited her to be the representative for the American Branch.
4. First woman to win the Nobel Prize in Literature

After completing her studies she worked as a school teacher and started writing books. In 1895 after receiving monetary support from the Swedish Academy and the royal family she was able to give up teaching to write. Her best known work was a children's book "The Wonderful Adventures of Nils".

Jacqueline "Jackie" Joyner-Kersee was born in 1962 in St. Louis, Illinois.

It was at the 1988 Summer Olympics in Seoul that Jackie won the Long Jump Gold medal. Five days before she had won the Heptathlon Gold Medal as well. This made her the first American woman to win both medals.
6. First woman to win the Eurovision Song Contest

Lys won the first ever Eurovision Song Contest held in Lugano, Switzerland in 1956 with the song "Refrain". There were only seven countries entered in the contest that year.

Lys had entered the German National Finals for Eurovision in 1956 but was unsuccessful. She was born in Switzerland so she was able to enter for Switzerland. She competed for Switzerland again in 1957 and 1958, coming second in 1958.
7. First woman to win US Medal of Honor

Mary Edwards Walker was born in 1832 in New York.

She was a surgeon who volunteered for the Union Army during the American Civil War. She was only allowed to work as a nurse in the beginning, but she later used her surgical skills.

In April of 1864 she crossed enemy lines to treat wounded and was arrested as a spy. She remained as a prisoner of war until released in a prisoner exchange in August of 1864.

After the war she received the Medal of Honour which is the US Armed Forces highest decoration for bravery. She was the first, and as of 2017, the only women to have received it.
8. First woman allowed to use the Harvard University library

It was while writing a book called "Summer on the Lakes" that she needed to do research on the Great Lakes region. She was allowed to conduct this research at Harvard's library. The book was completed in 1844.
9. First woman to win Golden Globe Award for Best Director

Barbra won the Golden Globe in 1984 for the film "Yentl". She directed, co-wrote, co-directed and starred in the film.

During their time together Andy won seven titles, and made the final of the Australian Open in 2015 and 2016. Two of the seven titles were on clay, a surface he improved on under Mauresmo's coaching.
Source: Author slfcpd 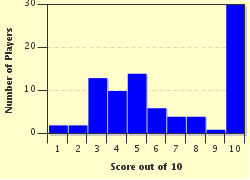 
Other Destinations
Explore Other Quizzes by slfcpd