Some fun and interesting facts about winter activities, past and present.

Quiz Answer Key and Fun Facts
1. On January 29th, 1863, in the midst of the American Civil War, a few hundred men from Texas plotted a friendly activity against their camp mates from Arkansas. One thing led to another and soon, around 9,000 soldiers of the Army of Northern Virginia were involved in what?

The snowball fight capital of the world is said to be Leuven, in Belgium, where 5,768 people participated in a snowball fight in 2009. There were "only" 5,387 people in the city of Taebaek, South Korea, who participated in an attempt to break this record, in January 2010.
2. The oldest representation of a human on skis is a small carving dating back from c. 5 000 BCE, and the oldest ski ever found was discovered in a peat bog and is anywhere between 4 500 and 6 500 years old. Both items were found in two different modern countries, but in which region of the world were skis first invented and used?

Prehistoric Nordic people and the ancestors of the modern day Sami (the politically correct term for Lap people) started using skis several thousands years ago according to artifacts found in Norway, Sweden, and Finland. In Norse mythology, both the god Ullr and the goddess Skađi are depicted hunting on skis and there are numerous written accounts, as early as the 10th century, mentioning skis.
3. It first appeared in Canada in the late 1970's (although home-made ones have probably existed for decades!). Its design is very simple, borderline minimalist: a single rectangular sheet of plastic, with two holes on one side. Its use is even simpler: you sit or lie on it and hold on to the holes while going downhill with very little to no control as to where it is going. How is this toy/product called?

Crazy Carpets (also called Krazy Karpets) are quite common and popular in winter in Canada. Cheap to produce and cheap to buy, easy to store (they roll up) and to carry around, it's almost impossible to control them as you are going downhill, which, of course, adds to the fun. I remember a time when, while studying at university, I zoomed past the library and went down at full speed towards the road, and ended up having to jump off (well... roll off is more accurate) the crazy carpet. I ended up buried in a snow bank and had snow everywhere, from my hat to my socks. Of course, I picked up my crazy carpet and ran back up the hill to do it again!
4. The World Ice Art Championship have existed since 1989 and is attended by sculptors from dozens of countries every year. There are three separate divisions (single block, multi-block and open), each of them divided into two sections (realistic and abstract). On average, a single block sculpture will weigh around four tons and will be completed in two days. Where is the Championship hosted every year?

The competition was inspired by the International Ice and Snow Sculpture Festival held in Harbin, in China, every year since 1963 (with a few years' interruption due to the Cultural Revolution). Competitors, in teams of two, in the single block classic category are not allowed to use heavy machinery.

In the multi-block classic category, the teams (of four people) receive 12 blocks of ice and are allowed to use heavy machinery. There is also an un-judged part of the competition, the Fairbanks Open, where amateurs can work next to the competitors.
5. In Canada, an easy treat consists of boiling maple syrup and pouring it on - clean - snow. It is then lifted with a stick or a fork and eaten. What is the Canadian name of this treat?

Maple syrup is boiled at about 112 °C (234 °F), a bit higher than water boiling temperature. The liquid is then poured into a container (bucket, dish, manger, etc...) packed with clean snow where it thickens as it cools down rapidly. It is very, very good, except in the presence of cavities and loose fillings!
6. "Skijoring" (which can be translated as "ski driving") originated from Scandinavia and does involve standing on skis. However, what is so special about skijoring?


Answer: skiers are being pulled by a running horse or dog

While the term itself is Scandinavian in origin, many people around the world have used dogs, and sometimes horses, to be pulled while travelling on skis. Today, it is mainly seen as a competitive sport or activity, and several competitions are held every year. Skijoring with horses was a demonstration sports in the Winter Olympic Games in 1928.
7. The first Icehotel was opened in 1990, and re-opens each year between December and April. The entire hotel is built from 27,000 tons of snow and ice blocks coming from the nearby Torne River. Everything in the hotel, from the rooms, the furniture, the art, and even the bar glasses, is made of ice, and every year, the hotel is re-built from scratch. Several ice hotels have opened since, but in which cold country is the original Icehotel located?

The story says that while Jukkasjärvi was holding an ice art contest, it ran out of rooms in hotels to welcome artists. However, a French artist had created an ice art exhibition within an igloo and some Japanese artists who had not found a room asked to set up camps in the igloo. This was the first time the "hotel" was used.

Once an ice hotel is built, the temperature inside tends to remain constant (around -2 °C to - 5 °C) even if the temperature outside drops. By April, however, most ice hotels in the northern hemisphere are vacated and melt away.

There is a "Hotel de Glace" which first opened in 2001 a few kilometres away from Quebec City. The Snow Hotel is found in Kirkenes, the easternmost town of Norway, and it first opened in 2006. The Snow Castle of Kemi, which does offer rooms, is the biggest snow fort in the world. It first appeared in 1996.
8. With tournaments in Japan, Finland, Norway, Australia, Alaska (U.S) and Saskatchewan (Canada), as well as a World Championship and a European Championship, this game is played between two teams of seven players each and is ruled by the Japan Yukigassen Federation. Which sort of activity is Yukigassen?

"Yuki" means "snow" in Japanese, and "kassen" means "battle". The snow court is 40 metres long by 10 metres wide. Each team has seven players wearing helmets with face shields. Each team is provided with 90 snowballs (made to specific standards with machines... this is serious stuff!) and has to eliminate the other team's players by hitting them, or capturing their flag.
9. Today, they are often used for leisure, but they were used solely as a means of transportation until quite recently. While archeologists believe the first ones originated probably from Central Asia 6,000 years ago, their modern version originates from those traditionally used by North American Aboriginals to go hunting, fishing, and in general to go places during the winter. What are they?

Snowshoes were used mainly by trappers, hunters and fur traders as a means of transportation in winter. Today, they are mainly used by hikers and runners. Many schools across the U.S. and Canada have also purchased snowshoes to fight obesity by bringing students to walk outside in the snow.

Skis and skates have been in used for several thousands years as well, but originates from Scandinavia. Skis were traditionally made out of wood, while the first skates seem to having been made of bones.

Ski-Doos were first developed by Canadian Joseph-Armand Bombardier in the 1950's. Originally, the name of the machine was supposed to be "Ski-Dog". Depending on the stories, either a painter made a mistake while painting the name on the first prototype, either the final G was often covered in snow so that it looked like an O, but in any case, it's the name Ski-Doo which became popular, not Ski-Dog.
10. The story says that, in 1885, a reporter from New York described this city as "another Siberia" and declared it was too cold for humans. In reaction, the Chamber of Commerce decided to prove to the rest of the United States that their city was very much alive, especially during winter times. They created the first Winter Carnival the following year and it's been happening every year without interruption since 1946. Where was the first modern Winter Festival created?

Saint Paul Winter Carnival first occured in 1886, then in 1888, 1896, 1916, and 1917, to become a permanent feature in 1937, with an interruption during World War II between 1942 and 1945. It resumed in 1946 and has been happening ever since. The festival includes an ice palace, a treasure hunt, numerous outdoors activities (skating, sledding, etc...), the coronation of King Boreas and his family, a grand parade, ice and snow sculptures contest, concerts, etc...

The Quebec Winter Carnival was first created in 1894, with the construction of its first ice palace, and it has been happening without interruption since 1955.

Fargo has a Winter Carnival, which started in 1928.

Fairbanks has been hosting the World Ice Art Championship since 1989.
Source: Author amidabutsu 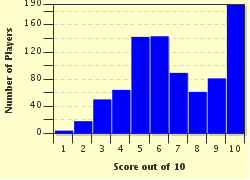 
Other Destinations
Explore Other Quizzes by amidabutsu