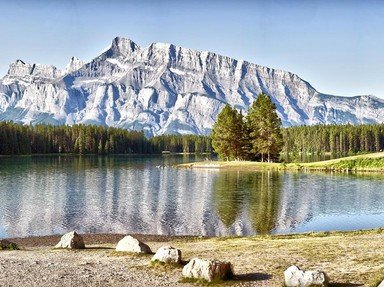 Not literally - that would a long way! Instead let's have some questions about going out for a walk in the country whether it be a gentle stroll in a park or climbing a mountain.

Quiz Answer Key and Fun Facts
1. Regular walking can reduce the risk of coronary heart disease, diabetes, stroke, high blood pressure, cancer, osteoporosis and arthritis. It can help you to deal with anxiety and stress, and may reduce the risk of Alzheimer's disease?

According to studies walking just 10,000 steps a day can decrease incidents of major diseases and illnesses. It can also help mental health and release endorphins into the brain to make you feel good.
2. If you are going out for a longer walk, perhaps in the hills or away from the crowds and busy towns as well as suitable footwear what is recommended that you take with you as a minimum?


Answer: a navigation aid, waterproofs and some food/drink

It's a good idea to take as a minimum a map or GPS (it's very easy to get lost, especially if the weather changes, it's also a good idea to know how to use it!), waterproofs (as you get cold very quickly if you get wet - even in the summer) and some food (it keeps your energy up and if you do get lost then you could be out for a lot longer than expected).
All the other stuff you can take with you but should be seen as optional extras.
3. If you walked from Overton Hill in Wiltshire to Ivinghoe Beacon in Buckinghamshire, you would have just completed which National Trail?

The 87 mile long trail follows the line of an ancient trackway across the crest of a chalk ridge. It has been described as Britain's oldest road and passes countless prehistoric burial mounds, the stone circles at Avebury, the Uffington White Horse and several iron age hill forts.
4. Many people go "peakbagging" or set out to climb a particular group of mountains. What is the name given to the group of Scottish mountains that are over 3,000 feet high?

Peakbagging involves climbing every hill in a certain set. For example all the mountains above 3,000 feet in Scotland would be a Munro Bagger. If you aimed to climb all of the lake district hills mentioned in Alfred Wainwright's guide books you would be a Wainwright Bagger, etc. Other groups could be all the county high points, the Welsh 3,000 footers, there are loads of possibilities.
5. England and Wales have 14 National Trails. What symbol do they use on their signage to show you are going the right way?

Britain's 14 National Trails have a combined length of around 4,000 miles. In Scotland, they have 4 Long Distance Routes, the symbol for which is a thistle in a hexagon.
6. You are walking along an English bridleway. A cyclist is coming towards you. What is the correct protocol?


Answer: He should give way to you

It is perfectly legal to cycle on a bridleway, however, cyclists should give way to other users. As the name suggests, bridleways can also be used by horse riders.

Footpaths are purely for pedestrians.
7. It's important that you take a detailed map (or equivalent electronic device) with you when you go out and about. The national mapping agency for Great Britain is called what?

The ordnance survey got its name from the fact that it was originally set up to provide accurate maps of the country during the Napoleonic Wars when the government was worried about the possibility of a French invasion of Britain. The first map produced was of Kent in 1801.
8. This sugary mint cake is thought of as part of the staple diet of walkers. Which Cumbrian town is it associated with?

Kendal mint cake is made from sugar, water and peppermint oil (sometimes it is covered in chocolate). It is standard kit in the Irish Defense Force's 24 hour ration kit and was taken on expeditions by Edmund Hillary and Ernest Shackleton. The general public seem to think of it as being inextricably linked to walkers and hikers although personally I can't stand it (sorry Kendal Mint cake but you are just too sugary for me).
9. If you were looking at an Ordnance Survey map and saw a symbol that looked like a + sign, what would it mean?


Answer: a church with neither steeple nor tower

Maps are works of art and I could look at them for hours (I do and I know I am very sad). Anyway, by looking at detailed maps before you set out and during the walk you can get a very good idea of the lie of the land; contour lines show the shape and steepness of hills, symbols show buildings, rivers, roads, etc. Among the most useful of the symbols are ones for churches. If you are sat on top of a hill and can see several villages one of the best ways of working out which is which is from the amount and type of churches. Churches with steeples have a different symbol from those with towers and so can be identified easily.
10. A traditional walk that is usually done in aid of charity is? 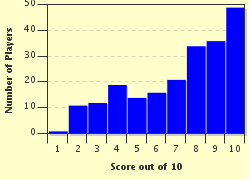 Related Quizzes
1. Something About Telescopes Average
2. Cold Weather Fun Average
3. Cemeteries Can be Fun Average
4. Hash House Harriers History Tough
5. Into the Woods Easier
6. Left to Your Own Devices Average
7. Orienteering Orientation Average
8. Increasingly More Dangerous Outdoor Activities Average
9. A Fit of Peak Tough
10. Let It Snow? Tough
11. Where's that Boomerang? It'll Come Back To You Tough
12. The Running of the Bullfrogs Average


Other Destinations
Explore Other Quizzes by colpeakbagger