Some love it, some play in it, some avoid it, some have never seen it, some sing or write poetry about it, some create devices to make it fun or safer, yep this quiz is all about snow!

Quiz Answer Key and Fun Facts
1. What is one name for a snowball that has been dipped in water?

Snowballs dipped in water are sometimes called, "soakers". The water is applied after one tries to make the perfect snowball. To make a perfect snowball the most important ingredient is the type of snow used which cannot be too dry nor too slushy. This is usually called "packing snow".

It is also recommended that when gathering the snow one should avoid the top crust of the snow and use the snow immediately underneath. Having made many a snowball, this author was surprised to find that there are many sites devoted to "how to make the perfect snowball". Snowball 101: a new educational course?
2. What is one method of getting an accurate snowfall measurement?


Answer: Use a wooden board

According to the National Oceanic and Atmosphere Administration, one way to get an accurate snowfall measurement is to take a two foot by two foot square of wood, preferably plywood, paint it white, place it on the ground before the predicted snowfall, and then stake it out. The plywood is painted white to reduce the effect of the sun's heat.
3. In the twentieth century, which Mid-Atlantic USA city recorded its largest snowfall amount ever from the Blizzard of 1996? Hint: think brotherly love.

On January 7, 1996, Philadelphia and its nearby vicinities received 27.6 inches of snow from the blizzard that occurred on that date. This major classic type of snowstorm blanketed the northeast portion of the USA from the Mid-Atlantic to the New England states. Philadelphia's second and third major snow falls deposited 22.5 inches of snow on December 19, 2009, and 21.9 inches on February 6, 2010. Numbers four, five and six for largest accumulations occurred in 1983, 1915, and 2003. Does this give rise to the question of Global Warming?
4. For which snow activity was Joseph-Armand Bombardier's invention known?

Invented by Joseph-Armand Bombardier of Canada in 1937, snowmobiling has become a popular winter sport. Prior to 1948, rural towns in the province of Quebec used horse drawn sleds to travel as the government cleared only major roads. Bombardier's invention of the snowmobile was a utilitarian benefit to winter travel.

In time, snowmobiling became a major outdoor winter activity. According to the International Snowmobiling Association in 2013 there were a little over 144,000 snowmobiles sold worldwide.

Another statistic from this aforementioned group is that the average snowmobiller is a forty-three year old man.
5. Which physical malady may be the cause of moving to a warmer climate with more daylight hours during winter in the North America?

"SAD", an acronym for Seasonal Affective Disorder, is a diagnosed physical malady that occurs to those who suffer mild to severe depression during the time periods when there is a shortage of daylight hours and the weather has many gray and dreary days. "SAD" is said to be one of the reasons why groups of people generally known as snowbirds are on the highways seeking warmer and much sunnier climates.

The "snowbirds" are usually from Canada and the US states that have cold to severe winter months.

In the United States many snowbirds travel to Florida, Arizona, and California to alleviate this affective condition.
6. Which snow paraphernalia, copied from the native North American population, aided the French during their battle with the British, commonly known as The French and Indian War (1754-1763)?

There is no known inventor of the snowshoe. The snowshoe is said to be one of the earliest common inventions, possibly dating back to the migration of peoples from Asia who crossed the Bering Strait. In early North American exploration the French explorers copied the footwear worn by the native American population to travel over the snow covered winter terrain.

This use of the snowshoe is credited to the French as a tactical manoeuvre aiding in their war with the British.
7. In which USA state has the largest snowflake in diameter been found?

The largest ever recorded snowflake is said to have been found in the US state of Montana. This six-sided icy crystal was fifteen inches in diameter. The snow flake was not recorded as having color. In some areas, snowflakes can reflect a color due to atmospheric conditions such as those in coal mining areas where coal dust can infiltrate clouds and produce grey colored snowflakes.
8. In the book, "The History of the Snowman", author Bob Eckstein notes the first published picture of a snowman was found in which medieval manuscript?


Answer: The Book of Hours

The Book of Hours was a prayer manuscript developed by monks which had prayer sections for each day, week, month, year, and season. Many of the different Book of Prayers contained beautiful illustrations. According to Mr. Eckstein, in his book "The History of the Snowman", the first known drawing of a snowman was in the 1380 medieval publication of the Book of Hours. Today, a picture of a snowman is not left to our imagination. Snowmen are found on lawns, Christmas cards, Christmas ornaments, and various seasonal clothing.

There is one web site where a series of photographs of snowmen are placed and you can vote for the ugliest one. Can there really be an ugly snowman? Frosty says, "no way".
9. Which smaller woodland animal has snow as part of its name?

The snow hare or snow rabbit is commonly found in North America and dwells amongst its woodlands. The snow hare sheds its summer brown coat for a white winter camouflage as winter begins and returns to brown as the snows melts. An easy prey for predators, the snow hare likes to live under dense underbrush in mainly coniferous forests. Snow hares do not burrow nor live underground which makes it easy prey. With its large hind feet and tufted tail it can be found by following its unique footprints in the snow.
10. What is the difference between the snow of a snow making machine and natural snow?


Answer: There is no difference

There is no difference between snow that is delivered by nature and snow blown from a snow making machine. Both "snows" are made from water and compressed air developed in cold temperatures. Nature's snow can be more dense by its neucleators accruing debris and making the snow crystal denser. Air compressors force particles together in much the same way to make the same dense snow.
Source: Author Irishrosy 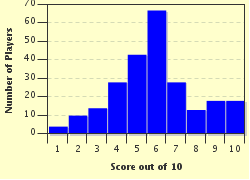 Related Quizzes
1. Ghost Towning in the United States Easier
2. Into the Woods Easier
3. Take a Hike! Easier
4. Hiking in the Desert Wind Easier
5. Make My Day Average
6. Left to Your Own Devices Average
7. It's a Jungle Out There! Average
8. Increasingly More Dangerous Outdoor Activities Average
9. Gravity Getting You Down? Average
10. Cemeteries Can be Fun Average
11. Something About Telescopes Average
12. Hiking around Britain Average


Other Destinations
Explore Other Quizzes by Irishrosy