I am a pepper fanatic! I love all kinds of hot and mild peppers. Answer the questions in this quiz to see if you are a pepper fan like me. In this quiz I use both the terms "peppers" and "chilis" interchangeably.

Try roasting poblano chilis on the grill until they are charred black, peel the burned skin under in cool water and use in fajitas or tacos. You can also eat a more healthy version of chiles rellenos by blanching the poblano, stuffing it with a filling, then baking it for 30 minutes on 375 F.

This is a much healthier alternative to deep frying. On the Scoville Heat Scale (a scale that measures how hot peppers are), the Poblano rates in the 1,000-1,500 range.
2. The Scotch bonnet is the hottest pepper in the world.

The Scotch bonnet rates between 100,000 and 350,000 on the Scoville scale. The hottest peppers in the world rate above one million on the scale, so as hot as a Scotch bonnet is, it is not the hottest. Scotch bonnets are native to the Caribbean and West African regions and are used in Jerk seasonings, fresh salsas and spice rubs.
3. This next chili is arguably the most popular hot pepper in North America. This little green guy is used in salsa, on burgers, and stuffed with cheese in restaurants and called "________ poppers." Which hot pepper is it?

The jalapeńo is the go-to spicy pepper in the United States and Mexico. It is difficult to find a restaurant these days that does not have jalapeńos available for customers to spice up their dishes. I enjoy grilling mine before slicing them and placing on a hamburger.

Dried, crushed Cayenne peppers were named after the region where they were discovered, Cayenne, French Guiana (South America). These versatile chilis are dried and used whole in Asian cooking, especially Chinese and Korean. They are dried and crushed to make up the defining ingredient for fra diavolo sauces and on pizza in Italian cuisine, and they are dried and ground into powder and labeled as ground red pepper or Cayenne pepper.

The Cayenne pepper rates a 30,000-50,000 on the Scoville scale.
5. The Carolina Reaper is one of the ultra-hot peppers with a Scoville rating above a million.

The "strength" of a spicy pepper varies a great deal. There is evidence that suggests peppers grown in hot, tropical weather with nutrient-rich soil, are hotter than the exact same variety grown in a more temperate, or cooler climate. There are currently about ten peppers that rate over one million Scoville units and out of those, there is one that was rated the hottest in 2016: the Carolina Reaper.

"Chipotle" is an Aztec word for smoked chili. Jalapeńos that are picked for the chipotle market are not the green variety, but the sweeter, ripened, and more flavorful red jalapeńo. Popular in Mexican and Tex-Mex cooking, most stores now carry either dried chipotles, or chipotles in a can in a red sauce.
7. What is an ancho pepper?

The ancho is a vine-ripened, red version of a poblano pepper. It is dried and used in Mexican and Tex-Mex recipes that require a more mild pepper than a chipotle. The word "Poblano" refers to the region of Puebla in central Mexico. "Ancho" translates to "wide" in English.
8. Which of the following chilis are used primarily in East and Southeast Asian cuisine?

The Tianjin or "Tien Tsin" pepper rates at 50,000 to 75,000 Scoville units and is the main hot pepper that you will find in most authentic Chinese Szechuan dishes. They are usually used in their dried form and tossed in whole into the dish with the other ingredients. As they heat up, they impart spicy flavor to whatever dish they are found in.
9. Most naturally hot chilis are indigenous to Central and South America.

The Spanish and the Portuguese are responsible for the spread of hot peppers to Asia and Europe during the 16th and 17th centuries.
10. The Mexican hot sauce brand Cholula uses which hot pepper as its main ingredient?

Piquin chilis are tiny, about the size of a small raisin, and quite hot (60,000-100,000 Scoville units). They are what makes the popular Mexican hot sauce brand, Cholula, so different from all the other brands.
Source: Author ElvishLord 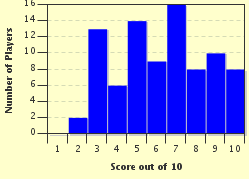 
Other Destinations
Explore Other Quizzes by ElvishLord