Know Your Board Games? Trivia Quiz

There are lots and lots of board games to choose from to relieve the boredom of those long dark winter evenings, so let's see how much notice you take when playing them, and how much you know about them!

Quiz Answer Key and Fun Facts
1. In the standard UK version of Monopoly, how many properties could you buy, but never build houses or hotels on?

You cannot build on either of the two utilities, nor on the four railway stations.
2. In the game of Scrabble (standard English language edition), how many tiles in total are available to choose from at the start of a game?

E is the most populous letter, with 12 available at the start of the game. The letters Q, X, and Z have only one of each, but are worth the most points when played, and there are 2 blank tiles, which a player can nominate to represent any letter of the alphabet, although they do not score any points when played.
3. Back to Monopoly now. In the UK version of the game, how much money does each player receive from the bank to start the game with?

Each player receives 2xÈ500 notes, 4xÈ100, 1xÈ50, 1xÈ20, 2xÈ10, 1xÈ5, and 5xÈ1. The American version of the game now has the same amount of notes issued to players, but of course they're in $ US instead of È Sterling.
4. At the start of a game of American Checkers (or English Draughts), how many squares are unoccupied by playing pieces, INCLUDING the white squares which are not used in the game?

There are 64 squares on a Draughts/Chess board. Each player starts a game of Draughts with 12 pieces, so 2x12=24, 64-24=40! And I worked that out without using a calculator!
5. Enough of the numbers for now - let's move on to Cluedo (Clue in the USA). There are four secret passages on the board, each leading to another room in the mansion. Where does the secret passage lead to from the study?

Chess as we know it today is thought to date from 15th century Europe, although it is believed that it actually based on a game devised in India even longer ago than that! It is a great game of strategy once you've mastered the basics!
7. In the Milton Bradley variant of the Battleship game, 5 "hits" by your opponent are required to sink which class of ship in your fleet?

In a variation of the game, the Destroyer is replaced by a Cruiser, but it still takes 5 hits to sink an Aircraft Carrier in either version.
8. Back to the UK version of Monopoly now - which of the following railway stations does NOT feature on the board?

Liverpool Street is the 4th correct station in the game. The real life station of St.Pancras is the London terminus for the Eurostar train service to France and Belgium via the Channel Tunnel.
9. Which board game for two players involves army officers and men attempting to capture the enemy's flag in order to win the game?

The game is played on a board of 100 squares, although there are 8 "unplayable" squares in the center of the board, depicted as lakes, to make play more difficult. As neither player can see their opponent's pieces, it really is a game of strategy!
10. Originally called Chutes and Ladders, the popular children's board game Snakes and Ladders was first introduced into the UK in the 19th century. In which country did the game originate? 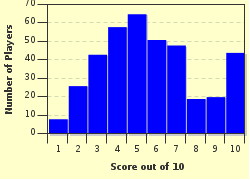 
Other Destinations
Explore Other Quizzes by skyvet