Quiz Answer Key and Fun Facts
1. Although no official documentation exists to verify its beginnings, when is the pretzel believed to have originated and by whom?

The popular story is that a European monk, while making unleavened bread for Lent, began shaping leftover dough in the now familiar crisscross shape, which resembled the form of one praying with their arms crossed over their chest. These were then baked and given to children as treats or rewards for learning their prayers.
2. Camcorder Day, Visit Your Relatives Day, Beer Day, Oatmeal Day...seems there's a day for everything. When is National Pretzel Day in the USA?

In 2003, Pennsylvania Governor Ed Rendell declared April 26 National Pretzel Day to acknowledge the importance of the pretzel to the state's history and economy. The annual pretzel industry in the US is worth over $550 million.

June 9 is Donald Duck Day, November 18 is Push Button Phone Day and August 18 is Mail Order Catalog Day - who knew?
3. In the United States, 80% of the nation's pretzels are made in what state?

Reading, Pennsylvania is known as the Pretzel Capital of the World.

Pretzels are such a large industry and so popular in Pennsylvania that a Recreation Department facility in Philadelphia was renamed in 2004 as Pretzel Park. It's designed with pretzel-like pathways and includes a public art work symbolizing a pretzel.
4. Although large scale producers of commercial pretzels use machines to twist pretzel dough into their classic shape, a woman named Helen Hoff is considered the champion of hand twisters. How many pretzels could Helen twist per minute?

Helen would demonstrate her skill at The Pretzel Museum in Philadelphia. Opened in 1993 and operated by the Nacchio family, the Museum held tours where one could view pretzel photos and learn pretzel trivia. A short movie of the history of pretzels was shown and tourists were then instructed on pretzel making and invited to "roll their own".

The Nacchio family also founded the Federal Baking Company in 1922. Using a family recipe, they produced soft baked pretzels which became a Philadelphia staple.
5. In 1963, the largest pretzel of its time was baked by Joseph Nacchio. Just how big was it?

That's made for some serious munchies!

The average American eats about 1.5-2 pounds of pretzels per year, except Pennsylvanians, who consume up to 12 times that!
6. The oldest commercial pretzel bakery in the United States was founded in 1861 in Lititz, Pennsylvania. What was its name?

Julius Sturgis opened a bread business in 1850, where he developed the hard, crispy snacks and sold them in his bakery. They eventually became so popular that he gave up the bread business and began strictly producing pretzels. Julius' grandsons, Marriot "Tom" Sturgis and Marriot's brother Correll, opened their own pretzel bakery in 1936 in Reading, PA. Their business, Sturgis Brothers, closed a few years later due to war drafting, but in 1946 Tom founded the Tom Sturgis Pretzel Company, which still produces pretzels today.

The Federal Baking opened in 1922, Snyder's in 1909 and Anderson's in 1889.
7. Although a tasty snack, apparently pretzels can also be dangerous. What US president was munching on a pretzel when he choked on it and momentarily lost consciousness?

According to reports, Bush had been watching the 2002 Baltimore-Miami NFL playoff when a pretzel he was eating "didn't seem to go down right". The next thing he knew he was on the floor with his dogs staring at him from above. An evaluation by a White House physician found nothing wrong, aside from a bruised and cut face, and attributed the incident to a decreased heart rate caused by the pretzel being lodged his throat and cutting off his oxygen supply.
8. Street vendors sell large, warm, chewy, soft pretzels that serve as a snack, breakfast or even a meal. What spicy condiment often tops these yummy treats?

It's been estimated that a quart of mustard is used for each 200 pretzels sold.
9. There are many toppings aside from salt that can be put on pretzels, but what are pretzels without salt called?

Pretzels are basically made from wheat flour, water, sugar and yeast, then sprinkled with coarse salt and glazed with lye (sounds tasty, doesn't it?). Many companies manufacture "pretzel salt", which is slightly larger than kosher salt and easily dissolves.

Pretzels can also be topped with sesame seeds, poppy seeds, cinnamon and sugar, Italian seasonings, garlic, dipped in chocolate, cheese or yogurt - the possibilities are endless.
10. Reading Pretzel Machinery Company revolutionized pretzel production with the introduction of what?

Prior to Reading's twisting machine, most commercial pretzels were shaped by a cracker-cutting machine, then transferred to baking pans and placed in the ovens by hand.
Source: Author moowho357 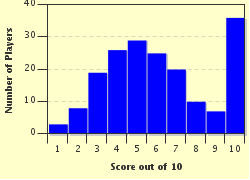 
Other Destinations
Explore Other Quizzes by moowho357