The Origin of Spices Trivia Quiz

This is a quiz about spices used in cooking and where they originated. Spices are the best way to make simple food not taste so simple. I hope you enjoy. This is an answer to a Quiz Challenge.

Quiz Answer Key and Fun Facts
1. Oregano: We've all heard of it, even those that don't cook. Where does oregano, the spice we cook with, originally come from (hint: this is not the same country in which it became most famous later)?

This is a distinctly Mediterranean spice, grown and used first in Greece but quickly spread to Italy. Oregano became known as the tomato spice because it blends so well with tomato sauces. Oregano is the sharper sibling spice of marjoram which is calmer yet more complex. Oregano grows with a pinkish purple flower in all temperate zones of the world.

When buying oregano at the market or grocery store, try to buy the leaves, not the powder. The leaves keep their flavor note much longer and the taste will keep you coming back for more.
2. Where in the world did the everyday spice that we call garlic originally come from?

Garlic grows in the ground as a bulb, similar to its cousin, the onion. Civilizations have been cultivating garlic for over 5000 years. That's before there were Pharaohs in Egypt or Dynasties in China. Garlic has many well documented health benefits and, of course, repels vampires. Enjoy the spice known as the stinky rose, garlic.
3. The leaves of the spice known as sage originally come from where?

The leaves of sage grow with blue to purple flowers and are part of the mint family of plants. Sage is a powerful spice that can dominate other spices if overused. Sage is one of the most popular turkey dressing spices in the western world. There are many varieties of sage found in different countries, but to be clear we are referring to a cooking spice here not the Native American sage which was reputed to be a powerful hallucinogen.
4. The leafy spice basil originated where?

This beautiful herb with its sweet, slightly minty spice note hails from India many thousands of years ago. Basil blends well with other spices and can be used very nicely with chicken, lamb or fish. Buy the leaves whole and crush with your bare hands to distribute over the dish before cooking. Enjoy!
5. Marco Polo wanted to know it, now I ask you: Where does cinnamon originate?

Cinnamon is the spice that got some of the Explorers looking all over the world for the shortest route to obtain it. It is not to be confused with its less expensive cousin, cassia, which comes from China and Vietnam. Cinnamon is made from 30 year old trees in two ways.

The more expensive and most highly sought after cinnamon comes from the lower older branches of the tree and the same method is used with the exception that an extra step of grinding the bark into a fine powder.

The lower older branches are used because the flavor and aroma are more concentrated in the older branches. Cinnamon was even used by the Ancient Egyptians in their Royal Embalming Fluids.
6. Where does ginger (the spice, not the Spice Girl) come from?

Grown first and then eaten in Southeast Asia, ginger is a wonderful and well rounded spice with many uses all over the world. Thai and Chinese cuisine are its most famous uses. Ginger is bought and sold in the form of a rhizome (a root-like plant organ).

It's the root that is used for the spice. Boiled, then scraped and finely chopped is how it's most often used for seasoning. The oil of ginger has been used for centuries to settle your stomach and to eliminate flatulence.
7. Where in the world did nutmeg (the pumpkin pie spice) originate?

Nutmeg originally came from the tropical rainforests of Indonesia. It's a tree that actually produces two different but obviously related spices: nutmeg and mace. Mace is made from the dark red outer membrane of the seed pod while nutmeg comes from the inner brown seed of the Nutmeg Tree. Nutmeg is the more pungent yet sweeter of the two spices. You really shouldn't bake a pumpkin pie without nutmeg.

It's used extensively in other baking as well as an essential in holiday eggnog. Yum.
8. Where is the origin of cumin, that wonderful spice that is used in almost all Mexican dishes these days?

Cumin is an ancient spice that has found itself reborn in recent times with the popularity of Mexican Food. It's a ground seed in the parsley family. It was used extensively in Medieval Europe because it had the potency to mask the taste of meat that might be a little past its prime.

These days it's used in marinades and barbeques as well as most Mexican style dishes. It has a lot of taste but not the heat of many Mexican chilies.
9. Where did paprika really come from, originally?

It's the national spice of Hungary, it flavors the national dish of Hungary, Hungarian Goulash, but originally it came from central Mexico. It's made from a sweet spicy pepper called a paprika pepper. It's hot but not like a cayenne pepper as it has less capsaicin but comparable flavor.

A word of warning to those thinking about cooking with paprika, be careful not to cook paprika at too high of a temperature, it is a delicate spice, it will turn bitter in an instant if the heat gets too high. Enjoy in a good stew or soup, but cook low and slow.

It makes for an excellent garnish for deviled eggs as well.
10. The most expensive spice in the world per ounce is saffron, but where did it originate?

The most expensive spice on the planet and every chef worth his salt says it's worth it. To harvest the saffron crocus flower, it must be picked by hand and then only the 3 burnt orange stigmas in the flower are used in the production of saffron. It takes about 4000 flowers to produce 1 ounce of saffron.

The price of saffron is around $315 an ounce. It is sold by threads, about 14,000 threads per ounce. When cooking the saffron, it is best to steep the saffron threads to release maximum flavor. The Spanish use it to flavor their paella. Europeans currently drink about 7 million liters a year of an elixir flavored with saffron called Fernet-Branca for its alleged health benefits.
Source: Author terraorca 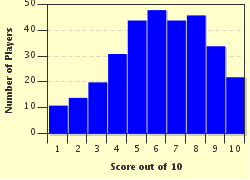 
Other Destinations
Explore Other Quizzes by terraorca