Where Do The Children Play? Trivia Quiz

Quiz Answer Key and Fun Facts
1. This game can be played both outside and inside as long as the area is large enough and free of dangerous obstacles. One person is 'It' and has their eyes covered trying to catch others. What game are we playing?

Blind Man's Bluff, or Blind Man's Buff, is thought to have been played in Tudor times and was popular in Victorian times as a parlour game. The object of the game is for the blindfolded person, 'It', to catch or tag another person who either then is out of the game or becomes the new 'It'.
2. The game of tiddlywinks had its origins as a Victorian parlour game for adults. The game uses small discs and the object of the game is to cover your opponents' small discs with your own and get your own small discs into the central pot. What is the name given to these small discs?

Tiddlywinks is a game for up to four players but is most often played by two people. Each player uses a disc called a squidge to move their winks. Whilst some may consider this to be purely a children's game, some adults take this game very seriously with there being National Tiddlywinks Associations in both England and North America.
3. What variant of cricket, usually played by children in their yards, involves only one batter, no wickets, no cricket pitch and definitely no field placings?

Despite the name, French Cricket was not invented by the French. Some suggest that the name has similar origins to the cricketing term "French cut" which means a poorly played shot. The object of the game is to get the single batter out by either catching the ball or hitting them leg before wicket.

As there are no wickets used in French Cricket, this actually means hitting the batter's legs. The player who gets the batter out is the next to bat.
4. I have brought my prized collection of tom bowlers, taws and peawees to school. My favorite is my lucky cat's-eye shooter which I hope I don't lose. What game will I be playing?

Marbles are usually made of glass and come in varying sizes. Tom bowlers and taws are larger marbles whilst the peawees are usually the smallest size marble. The game of marbles was widely played in my childhood at primary school. The version we played involved marking out a circle in the sand or dirt and then using your own marble to hit another player's marble out of that circle.

In the cut-throat world of our playground, you got to keep the marbles you knocked out. I usually went home with fewer marbles than I started with.
5. If you have ophidiophobia, which of these board games would you possibly prefer not to play?

Ophidiophobia is the fear of snakes and perhaps those with a severe enough phobia might refuse to play Snakes and Ladders. Snakes and Ladders originated in India and is thought to have been invented to teach children the consequences of good and bad deeds. It came to England in Victorian times and is still popular today.
6. The game of knucklebones was quite popular when I was growing up. It was also popular with your parents as they didn't have to buy you any special equipment but just save you the knuckle from the Sunday roast. What type of roast would the knuckle usually come from?

Knucklebones is played with five knuckles and involves throwing one up in the air and then trying to pick up one, then two and so on knuckles. The game becomes more complex as you try and pick up more knuckles while doing more intricate throws with the first knuckle (also called jack), such as catching it on the back of your hand.

There are records of the ancient Greeks playing versions of this game.
7. To play this game my friends and I usually needed some chalk, a bean bag or just a rock for a marker and a piece of concrete or asphalt on which to draw what was called "the court". Sometimes we needed to use two legs and sometimes only one. What game were we playing?

The first record of the game is in the 17th century in England and was referred to as scotch-hoppers. There are no clear indication as to how the name of hopscotch or scotch-hoppers was derived. Hopscotch involves a series of ten squares laid out first in a line of three, followed by a row of two, another single square, another row of two and finally topped by a single square.

A marker is tossed into the first square and the player must then hop/jump through all the other squares except the one with the marker in it.

The marker must land wholly in the designated square; if it doesn't, the player misses their turn. The game continues as the players move up and down all ten squares with the first one to complete the sequence being the winner.
8. Rock-Paper-Scissors would have to be one of the simplest and cheapest games ever invented. You just need one other person and the ability to shape your hand into a fist (rock), point two fingers (scissors) or laid out flat (paper). Which one of these is NOT correct for the game of Rock-Paper-Scissors?

Paper beats rock because it can cover the rock. Scissors beats paper because it can cut the paper. Rock beats scissors because it can break/smash the scissors. If both players come up with the same shape, it is a draw and they try again. Sometimes this game is played to help decide who does or doesn't do something in the same way you might toss a coin and call heads or tails.
9. This game, usually played inside, involves a player using hand signals to give clues to the other players to help them guess a word or phrase. Fingers are held up; ears are tugged; imaginary cameras are cranked; people pretend to be reading. And all of this is done without saying a word. What game are we playing?

In charades, tugging your ear means "it sounds like"; the camera indicates a movie; and the book reading obviously a book. Some other common non-verbal clues in charades are: You can indicate you are a person by standing with your hands on your hips and a TV show is signified by drawing a rectangle to outline the TV screen. To indicate a quote or phrase, you would make quotation marks with your fingers. The game is usually played in teams and the game is usually finished when each team member has acted out one charade. The team that gets the most right wins.
10. If I was in the playground with my friends, usually other girls, and I was playing "Double Dutch", what piece of equipment would we be using?

Double Dutch involves two skipping ropes, which is much harder than a single rope. The speeds and direction of each individual rope can be varied, making it complex for the skipper in the middle to keep pace with each rope.
Source: Author cazza2902 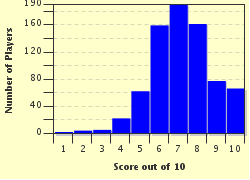 Related Quizzes
1. Toys And Games 2 Difficult
2. Games and Toys and their pieces. Easier
3. What a Party Game! Very Easy
4. Toys! Toys! Toys! Average
5. So You Think You Know About Wordle ... Easier
6. Help, I'm a Piece in a Game! Easier
7. This Is Not A Game! Average
8. Dice, Dice Baby Average
9. An Old Fashioned Toybox Very Easy
10. Wordle by Wardle Easier
11. No Computer? No problem! We Had Fun Games!! Very Easy
12. Toys And Games 6 Tough


Other Destinations
Explore Other Quizzes by cazza2902