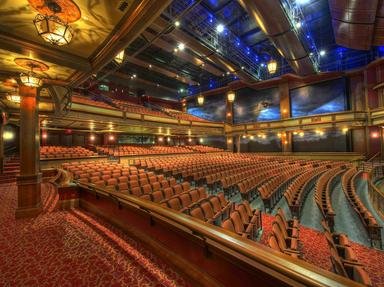 Songs in musicals can affect in different ways; they can make us laugh or cry, or simply entertain. On occasion they can be slightly 'warm'. Use the photo clues to help identify some 'hot' songs and the musical each came from.

Quiz Answer Key and Fun Facts
1. What song from "The Gypsy Baron" speaks of an exile, Barinkay, who is drawn to the beautiful Arsena, and despite being ineligible (in the woman's eyes) he considers how he can best win her?


Answer: A Moth Who Loves A Flame

"The Gypsy Baron" is a comic operetta with a libretto by Ignaz Schnitzer, that is based on Mór Jókai's story "Sáffi". The music is by Johann Strauss II. It tells the story of the love of a landowner, returned from exile, for a gypsy girl, who turns out to be the daughter of a Turkish Pasha (chieftain) - and incidentally the owner of a hidden treasure. On his way to realising the one with whom he is really in love, he proposes to Arsena, and is rejected.

The picture is a 'moth' drawn to a 'flame' - the bright flowers.
2. From a musical of the same name celebrating the life of Johnny Cash, what song reached number 1 on the U.S. Billboard's Hot Country Singles?

The musical "Ring of Fire" is about love's power and was written in 1963 by June Carter Cash and Merle Kilgore. A number of others have covered the song of the same name, including Alan Jackson, and Eric Burdon and the Animals.

I hope the gas ring gave you a good clue as to the correct alternative!
3. "The Pajama Game" was the source of what hot number, sung by Gladys and the Boys?

The original Broadway version of "The Pajama Game" was written in 1954 and was awarded a Tony for Best Musical, Best Performance by a Featured Actress in a Musical and Best Choreography. It tells the story of a pyjama factory strike for a wage rise of seven and half cents per hour.

While the song, hinted at by the steam engine in the picture, was not a huge hit initially, it became popular over time, and many artists have since had lasting success with it.
4. What operetta contains the song "Away, Away! My Heart's On Fire", the tale of a 'slave to duty'?


Answer: The Pirates of Penzance

This song comes at the point in this amusing Gilbert & Sullivan operetta when Frederic realises that he is not (as he thought) 21 and therefore free from the bonds of piracy, but has instead only had 5 birthdays, as he was born on February 29. His beloved Mabel agrees to wait for him until he finishes his indenture period to the pirate band - in another 63 years! The song expresses his distress at the 'base deception'.

Like the pictured pirate, he wasn't a real pirate, and nor were his cronies. They were all soft-hearted sons of nobles.
5. Things really hot up with what song from the musical "Sweeney Todd"?

The 1979 Broadway musical thriller "Sweeney Todd: The Demon Barber of Fleet Street" has music and lyrics by Stephen Sondheim. It opened on the West End in 1980 and won a Tony for Best Original Score in 1979.

The picture is an apocalyptic imagining of a city that is burning, by Brigitte Werne, an artist from British Columbia, Canada.
6. What classical musical of drugs, sex and rock'n'roll features the number "Let the Sun Shine In"?

"Hair" (hinted at by the picture) was the first and most successful rock musical, an adaptation of the book by Gerome Ragni and James Rado. It was first performed off-Broadway in 1967 and on Broadway in 1968.

It tells the story of Claude, a long-haired hippie, who is drafted. Though the members of his 'tribe' hold a draft-card burning party, Claude decides to accept the inevitable and presents himself for service at the appointed time. Sheila, the girl he is in love with, supports him.
7. In the musical "Rent", when a series of unfortunate events take place at Christmas, what song is the logical response when the power goes off?

In terms of the story-line, this is a convoluted musical. It contains complex emotions, with the characters each wrestling with his or her own personal difficulties. The end comes when they arrive at an awareness of the uncertainty of life and affirm that there is no day but this one.

The picture, of course, is a match - struck, ready to light the candle.
8. The musical number "Sunshine" comes from what musical, made famous in the film version by the appearance of Marilyn Monroe as Lorelei Lee?

This well-known story of a button magnate who adds to his empire by merging with a zipper manufacturer is set in 1924. His fiancée, Lorelei Lee, and her chaperon Dorothy are heading to Paris by ship, where Lorelei will sing in a nightclub. On the way, Dorothy encounters Henry Spofford III, and they sing "Sunshine" at this point.

Lorelei flirts with a fellow-passenger named Joseph, and her fiancé finds out. After the 'misunderstanding' is sorted out, they are happily united in marriage.

The doll in this picture is blonde - if you needed the hint!
9. Famous for its matchmaker, in what musical is the song "Sunrise, Sunset" sung by Tevye & Golde?

"Fiddler on the Roof" tells the story of a milkman in Tsarist Russia with five daughters to marry off, in the midst of the breakdown of traditional Jewish values. Tragically, not only are values changing, the persecution is forcing Jewish people to leave the village. The milkman and his wife, and the two youngest daughters flee for sanctuary in America.

The fiddlehead fern (pictured), named for its resemblance to the scroll end of a violin, is a good source of fatty acids, and has been eaten for centuries as a green vegetable in Asia, France, and among the native Americans.
10. What number in "42nd Street" comes originally from a 1938 'rom-com', starring Olivia De Havilland and Dick Powell, called "Hard to Get"?


Answer: Sunny Side to Every Situation

The musical "42nd Street" is a clever amalgamation of works by Al Dubin and Harry Warren, as well as some by Warren and John Mercer. It builds on the plot of the 1933 film of the same name, weaving a story around the stars of a new show to be called "Pretty Lady". The aim of all the stars, of course, is to eventually find fame on 42nd Street, New York, which is known for its theatres. A Broadway revival of the show won the 1980 Tony for Best Musical.

The eggs pictured are cooked in the style known as 'sunny-side up'. I hope this clue helped!
Source: Author VegemiteKid