The book "Holes" by Louis Sachar captured me from the get-go. I couldn't wait to see the movie. If you've seen "Holes", then this quiz is for you. It's a mixture of quotes and regular questions. Enjoy!

Quiz Answer Key and Fun Facts
1. What is the name (NOT nickname) of the main boy in the movie?

Stanley is the fourth generation Stanley Yelnats. Every first-born son is named that because their first name is their last name spelled backwards.
2. Who said this: "Once upon a time there was a magical place, where it never rained. The end."

At this point, all of the kids at Camp Green Lake are hoping that a thunderstorm might reach them and relieve them of some of the heat.
3. The real purpose of the boys digging the holes is to build character.

The Warden has them dig the holes to look for Kissin' Kate Barlow's treasure.
4. Zero is related to Madame _______.

When Stanley carries Zero up the mountain he breaks the curse that has affected his family for generations.
5. What is the name of the boy that replaces Zero?

Twitch is called that because he has a tendency to start twitching around cars that he wants to steal.
6. What is the special ingredient that the Warden adds to her nail polish?

She scratches her nails across Mr. Sir's face when he brings Stanley to her because he accuses Stanley of stealing his sunflower seeds.
7. What occupation did Kate Barlow hold before she became Kissin' Kate Barlow?

Patricia Arquette can be seen in other movies such as "Little Nicky" with Adam Sandler, "Stigmata", and "Bringing out the Dead".
9. Why does Kate become Kissin' Kate?


Answer: Because the sheriff wouldn't help her, instead he asked for a kiss

When Trout Walker burns down the schoolhouse, Kate goes to the Sheriff for help. Later, after he refused to help her, she shoots him, and then gives him the kiss he asked for.
10. Who said this: "My no-good-dirty rotten-pig-stealing-Great-Great-Grandfather."

The Yelnats curse was started because Stanley's Great-Great Grandfather didn't take Madame Zeroni up the mountain like he had promised. Instead, he went to America.
11. Sam, the Onion Man, says this each time Miss Kate asks him to fix something.


Answer: I can fix that

Mary Lou is also the name of Sam's boat that Stanley and Zero find shelter under when they escape from camp.
13. When Stanley breaks the curse, his father finally figures out how to get rid of foot odor.

At the same time the curse is broken, Stanley Yelnats III (played by Henry Winkler) drops something into his mixture and figures out how to get rid of the stinky shoe smell.
14. Why don't the yellow-spotted lizards bite Zero and Stanley?


Answer: Because they ate onions for days

Stanley and Zero ate onions for days, which gave them Onion Blood. Yellow-spotted lizards hate Onion Blood.
15. Who really stole the sneakers that got Stanley into Camp Green Lake in the first place?

Zero stole the sneakers from the homeless shelter because he needed new shoes. Stanley ended up getting hit in the head with them when Zero got rid of them.
Source: Author megrit 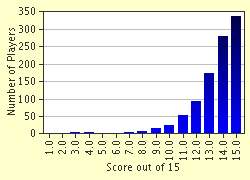 
Other Destinations
Explore Other Quizzes by megrit