The Difference Between Two 'Holes' Quiz

One story, two versions. One version made by Louis Sachar, the other made by Disney. Did you spot some of the differences between the two? This quiz requires, of course, that you have read both the book and seen the movie.


Answer: He stepped on a rattlesnake

The scene where Barf Bag stepped on the rattlesnake was the first scene in the movie. Stanley was told by Mr. Sir, just after he arrived at Camp Green Lake that rattlesnakes wouldn't bother him if he left them alone. Usually. And rattlesnakes wouldn't kill him. Usually.
In the book, however, we were only told of this episode, we didn't witness it, like we did in the movie.
2. At one point Stanley found a little gold object that used to belong to Kate Barlow. Which of these statements is correct about this scene in the movie?

In the book, Stanley tried to hide the letters from X-Ray because he doubted that X-Ray could see them and then maybe he wouldn't find it interesting enough to show to Mr. Sir or Mr. Pendanski. Whereas in the movie, Stanley actually did the exact opposite and showed X-Ray the letters.
Zigzag thought the letters KB were short for Keith Baron, who was a kid in his math class.
3. When Stanley Yelnats is telling the story of Elya Yelnats, he mentions that Madame Zeroni taught Elya the song "If only, if only", which of these lines from it is incorrect in the movie?


Answer: The bark on the tree was just a little bit softer

The movie-version went as follows:

"If only, if only," the woodpecker sighs,
The bark on the tree was a soft as the skies.
While the wolf waits below, hungry and lonely,
He cries to the moo-oo-oon,
If only, if only."

The one from the book went as written below:

"If only, if only," the woodpecker sighs,
The bark on the tree was just a little bit softer.
While the wolf waits below, hungry and lonely,
He cries to the moo-oo-oon,
If only, if only."
4. Which of the following characters do we NOT see in the movie?

Sara Miller was the woman, with whom Elya Yelnats got married when he came to America. She then became Stanley's great-great-grandmother. She was also the one who noticed that Yelnats is Stanley spelled back wards.

Twitch, or Brian as his real name was, was the boy who replaced Zero in D-tent. We hardly saw him during the movie since Stanley ran out after Zero quite quickly in the movie.

Clyde Livingston was the famous baseball player who had donated the sneakers, that Stanley was accused of stealing. He is actually seen twice doing the movie: At Stanley's trial and at the party at the end.

Igor Barkov was the guy whom Elya Yelnats was "competing" against for Myra Menke's hand in marriage. He plays one of the smallest roles in the movie.
5. What did Armpit find, while everybody was digging together in X-Ray's hole?

He showed the oven knob to the warden who asked him if he was trying to be funny or if he thought she was stupid. He ended up losing his shower tokens for a week.

This didn't happen if the book. However the book also held a scene that didn't occur in the movie (it's in the deleted scenes, however). That would be the scene where Zigzag hit Stanley behind the ear with his shovel.
6. How were we told in the movie that the counselors didn't sleep in Tent F?

Stanley was assigned to D-tent. "D stands for diligence" according to Dr. Pendanski. In D-tent, Stanley lived with Rex, Ricky, Alan, Theodore, Jose and Hector. Or in the words of the boys: X-Ray, Zigzag, Squid, Armpit, Magnet and Zero.
In the book, Stanley was told by Dr. Pendanski that the counselors slept in F.
7. What fruit did Katherine Barlow make spiced in the movie?

The trees all along the shores of the lake, during Katherine's lifetime, grew peaches, which she used to make spiced peaches. Katherine kept one ingredient secret from everybody else, so nobody would steal her recipe. She also received a special award every summer because of delicious peaches.
Between the book and the movie this was exactly the same.
8. What was Kate Barlow doing when Trout and Linda found her, just before she died?


Answer: Leaning against the Mary-Lou

In the movie version, Kate was sitting beside Sam's old boat (the same boat in which Zero would find shelter many years later) and talking to him, when Trout and Linda came up to her and demanded her to tell them where she buried her loot. The last thing she said before she died was: "You, your children and your children's children will dig for the next 100 years and you will never find it." Then she placed a Yellow-Spotted Lizard on her arm and laughed as the lizard bit her.

In the book version, Kate was being woken from her sleep in her cabin by Trout and Linda Walker. They made her walk around barefoot on the hot, desert ground and hit her on the backside of her ankles by a shovel until she would tell where she had hidden her loot.
9. "Hey, call my mom. Tell her, I'm sorry. Tell her Allan said he was sorry." This line is not a correct line from the movie. Which word had to be changed to make it a correct quote from the movie?

The name "Allan" had to be changed to the name "Theodore", as it was Armpit who said it in the movie. The line above is taken directly from the book. It was said at the end when Stanley and Zero was reunited with the rest of D-tent after their stay at God's Thumb. Apparently Armpit had learned his lesson and was feeling remorse for what he had done, which we never found out what was.

Actually, neither the book nor the movie told us what Squid, Armpit, X-ray or Zigzag did. We were only told that Stanly was accused of stealing shoes, Zero stole shoes from a Payless, Magnet stole a puppy and Twitch stole a car.
Not much have we been told about the D-tent boys' pasts but we do know from the movie that Squid's mother was drinking and his father had left them.
10. Who was on the guest list at the party at the end of the movie?

In both versions, the people at the party watched the commercial that Stanley's parents made with Clyde Livingston. In the movie, the D-tent boys "played" in the pool while Mr. Yelnats barbecued hamburgers.
Source: Author MissVoldy 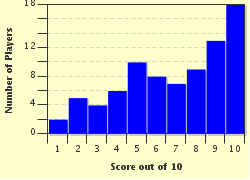 
Other Destinations
Explore Other Quizzes by MissVoldy