A quiz based on one of the many songs that shaped rock and roll, "Baba O' Riley" by the Who. Good luck!

Quiz Answer Key and Fun Facts
1. As we all know, "Baba O Riley" was released off of the great album "Who's Next". But what album was the song originally going to be on?

"Lifehouse" was another rock opera idea, but was abandoned by Pete Townshend. Many of the songs off of the failed opera were used for "Who's Next". "Baba O Riley", on most versions of the album, is the starting track for "Who's Next", released in 1971.
2. The synthesizers really did the trick for the tune "Baba O' Riley", it revolutionized rock music in a way. What was one of the main things that made the synthesizers significant to the song, and to rock and roll for that matter?


Answer: It was one of the first songs for a synthesizer to be used as the rhythm of the song.

Much more contributed to the uniqueness of "Baba O' Riley", but the synthesizers opened up a whole new door for rock. Townshend's genuis is shown with the new ways of using a very underrated machine and instrument. And not just new, pretty effective also. Townshend later incorporated synthesizers to songs such as "Bargain" (also on "Who's Next") and "Sister Disco" (off of "Who Are You" released in 1978).
3. "_________ take my hand We'll travel south cross land Put out the fire And don't look past my shoulder" Who is the lady that the singer wants to take?

Another reference to the abandoned "Lifehouse" project, Sally was the name of the farmer's wife. Most people thought that Townshend was writing about a girl he knew or someone he fell in love with, but we know the real truth now.

This stanza comes after the one in the question.
4. There is an abandoned story behind "Baba O Riley". Apparently, Pete Townshend wrote this in the voice of a Scottish farmer, who is taking his wife and their two kids so they can begin their exodus to London. What was the name of the farmer going to be?

If the "Lifehouse" idea was never abandoned, then "Baba O Riley" would have started off the film when the farmer Ray and his family start their travel to London, most likely in search for a new life. "Goin' Mobile" was another song intended to be about Ray and his family traveling.
5. In the song "Baba O' Riley", Pete Townshend sings a part of the song. What part?

This is perhaps my favorite part of the whole song, especially the part where Moon just breaks into one of his drum solos after Townshend sings these lyrics. In concert, it is traditonal for the audience to sing along with Townshend during this part of "Baba O' Riley".
6. "Out here in the fields I fought for my meals I get my _________" Finish the lyrics please.


Answer: back into my living

This stanza opens up the song "Baba O Riley". Following after this stanza, Daltrey sings another one for more emotion into it, giving a feeling that he is very mad at the situtation he is in now (some could guess life is not going great for him). Daltrey's vocals are incredible in this song, in my opinion.

This is the stanza that follows the one in the question.
7. "Baba O Riley" derived from a demo by Pete Townshend. How long was the original demo?

Townshend cut it down from a nine minute and fourty-eight second song to a five minute and one second masterpiece (most of the versions of the song are five minutes and one second, except for the 1995 re-mastered version of "Baba O Riley", that has six additional seconds in the beginning).
8. Everybody knows about the amazing violin solo towards the end of the song "Baba O' Riley". I'm tired of asking who did this solo (you all should know by now), but here's another question. Who's idea was it to put the violin solo at the end of the song?

Dave Arbus came in to play the violin jig towards the end of the song. Moon came up with the idea and even produced the part of the violin, according to the liner notes on the CD of "Who's Next". In concert, the violin was replaced with a harmonica (played by Roger Daltrey).
9. The original demo of "Baba O Riley" by Pete Townshend was put on a rare tribute album for Meher Baba (Townshend's spiritual teacher) in which the song is partially named after. What was the album called?

The album "I Am" was released in 1972, composed of Townshend and his friends. Other albums dedicated to Baba include "Happy Birthday", "With Love", and "Avatar".
10. "Baba O Riley" has always been a concert favorite and therefore, a lot of live versions of the tune have been put on live albums. Which of the following live albums has "Baba O Riley" not appeared in?

In total, the song has appeared on seven live albums. "Baba O Riley" has been very culturally significant to rockers and many more, its uses of unique instruments such as synthesizers and violins make the music one of a kind. The song was deemed one of the "500 Songs That Shaped Rock and Roll", a list made by the Rock and Roll Hall of Fame Muesum. Thanks for playing my quiz!
Source: Author thewho13rd

This quiz was reviewed by FunTrivia editor ralzzz before going online.
Any errors found in FunTrivia content are routinely corrected through our feedback system.
Most Recent Scores
Jan 26 2023 : Guest 207: 3/10
Dec 11 2022 : Guest 86: 6/10 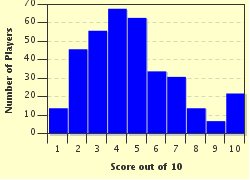 Related Quizzes
1. Lyrics of The Who Easier
2. Essential Who Tough
3. Who's Next Average
4. Come On the Amazing Journey...Part 2 Average
5. The Who Average
6. The Who Lyrics I Average
7. Song by Song: "My Generation" Easier
8. The Who by Numbers Difficult
9. Hope I Die Before I Get Old Average
10. The Jingles from "The Who Sell Out" Tough
11. The Who Lyrics Average
12. A Who Quiz for Who Fans Average


Other Destinations
Explore Other Quizzes by thewho13rd