This is my first quiz - and what better subject to begin on than the lyrics and songs of the great Bob Dylan?

Share on Facebook
Share on Twitter
Share by E-Mail
Author
JackOfHearts
Time
4 mins
Type
Multiple Choice
Quiz #
165,193
Updated
Dec 03 21
# Qns
10
Difficulty
Average
Avg Score
6 / 10
Plays
1849
This quiz has 2 formats: you can play it as a or as shown below.
Scroll down to the bottom for the answer key.

Quiz Answer Key and Fun Facts
1. In the song 'All I Really Want To Do', what is it that Dylan wants to do?

This song appears on 'Another Side Of Bob Dylan' - his fourth studio album which was recorded in just one night in 1964.
2. On the album 'Bringing It All Back Home', Dylan attempts to start a song but breaks into a fit of laughter after the first line, causing him to have to stop and start again. What is the name of this song?

I don't know what makes him laugh - I love the imagery in this song though - who the hell is the Pope of Eruke???
3. Tough one here for the more hardcore Dylan fans: At the Band's legendary farewell concert 'The Last Waltz' in 1976 (filmed by Martin Scorsese no less), Bob joined The Band on stage for a few songs - which of these (among others) did he play?

I would recommend the soundtrack of this concert - Dylan's performance is fantastic, and other guests include Eric Clapton, Neil Young, Van Morrison, Joni Mitchell and Muddy Waters.
4. In 'Masters Of War', which biblical figure does Dylan compare the warmongers to?

'Like Judas of old/You lie and deceive/A world war can be won/You want me to believe' - this song is as relevant today as it was when it was written over forty years ago.
5. In the ballad 'Boots Of Spanish Leather', which two cities are mentioned?

This is possibly my favourite Dylan song and I love the sadness at the end when he realises his lover is probably not coming back to him.
6. The line 'Gonna find me a janitor to sweep me off my feet' comes from which song?

This song comes from his 1997 album 'Time Out Of Mind' - Dylan has always enjoyed using awful puns in his songs, but he seems to have done so much more often as he has got older - take this gem from 2001's 'Honest With Me' 'I'm stark naked but I don't care/I'm going off into the woods, I'm huntin' bare'.
7. True or false: Bob Dylan has performed on record with both Johnny Cash and Emmylou Harris.

True of course, quite an easy one - with Cash on Nashville Skyline's 'Girl From The North Country' and with Harris on most of the 'Desire' album.
8. What was the name of the 1973 film for which Dylan provided the soundtrack (which included 'Knockin' On Heaven's Door')?

A very good film, in which the man himself makes a cameo appearance.
9. At Dylan's 30th Anniversary Celebration concert, who performed Bob's song 'Absolutely Sweet Marie'?

I prefer the original myself.
10. And finally: In what year did Dylan's so-called 'Never-Ending Tour' actually begin?

Bob has been touring pretty much non-stop for around sixteen years, and to date (January 2004), he is still going!
Source: Author JackOfHearts

This quiz was reviewed by FunTrivia editor Bruyere before going online.
Any errors found in FunTrivia content are routinely corrected through our feedback system.
Most Recent Scores
Jan 17 2023 : Guest 12: 7/10
Dec 09 2022 : Guest 98: 10/10 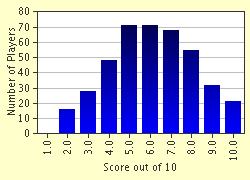 
Other Destinations
Explore Other Quizzes by JackOfHearts