Elvis and the Colonel Trivia Quiz

For all Elvis fans. Just complete each sentence.

Quiz Answer Key and Fun Facts
1. Colonel Parker was given the honorary title of Colonel by Jimmie Davis, the governor of _________.

The Colonel was given the honorary title in 1948.
2. Colonel Parker took full control as manager of Elvis Presley in ______.

For the first five days of that period he belonged to Company D of the battalion, and thereafter to the battalion's Headquarters Company at Friedberg.
5. Elvis Presley's sixth movie production was __________.

A drama with limited music. Elvis plays the son of a white father and a Native American mother, torn between the two cultures in the 1800's. The film co-stars Barbara Eden. It is my favourite Elvis movie.
6. He was proud of his role in ______ because the part was originally offered to his idol James Dean.

Elvis considered it his best work.
7. He was offered the lead role of Tony in the film adaptation of the Broadway musical "West Side Story" but turned it down because _________.


Answer: the Colonel forced him to turn it down

Col. Parker forced Elvis Presley to turn it down as non-commercial despite Elvis' arguments it would legitimize his acting career. The film won ten Academy Awards including Best Picture.
8. Elvis won _______ Grammy awards.

A re-release of Elvis Presley's 1959 hit "One Night" soared straight to number one just a week after his 1957 classic "Jailhouse Rock" held the same position - "One Night" also gives Elvis his 20th UK number one. In total Elvis has now had 21 UK number ones. His last was "Its Now or Never" 05 Feb 05.
Source: Author richieTCBmacca 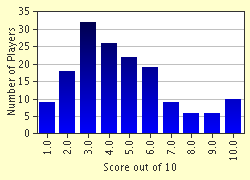 
Other Destinations
Explore Other Quizzes by richieTCBmacca