Many songs by the Dead tell stories with many rich characters. This quiz is about those characters which appear in the titles. Enjoy!

At the end of the song, we hear the following lyrics:

"Jack Straw from Wichita
Cut his buddy down"

In this song from "Europe '72", Jack Straw becomes more and more agitated by the reckless behavior and attitude of his "buddy" Shannon. In the end, Jack Straw takes Shannon's life and buries him in a shallow grave.

Wichita, with a population of over 380,000 people, is the 49th largest city in the United States.
2. Whose father warned him that he'd never get far, because "there isn't really very far to go"?

In "Dupree's Diamond Blues", written by Hunter and Garcia, Dupree gets sentenced to death for robbing a jewelry store (and killing the jewelry man) while trying to procure a diamond ring for his "baby". The moral of the story is that a woman can drive a man to do some terrible things.
3. What is the "one thing" the narrator asks of the title character "Sugaree"?

"Sugaree" was another Garcia/Hunter song, which originally appeared on Jerry Garcia's first solo album "Garcia" released in 1972. It did not appear on an official Dead release until the "Steal Your Face" live album.
4. All things seem to compel the title character Jed to return to his home state. What state is that?

According to the lyrics:

"I ran into Charley Phogg
He blacked my eye and he kicked my dog
My dog, he turned to me and he said
Let's head back to Tennessee, Jed"

First performed in 1971, "Tennessee Jed" appears on the live album "Europe '72". It was composed by Jerry Garcia and Robert Hunter.
5. Which Grateful Dead title character said "I know you don't want my love no more"?

From the lyrics of "Loose Lucy":

"Loose Lucy, she was sore
Says I know you don't want my love no more"

This risque Garcia/Hunter composition appears on the album "From The Mars Hotel", the seventh studio album by the Grateful Dead and the first album to be released on their own label.
6. What Grateful Dead title character is described as "child of countless trees" and "child of boundless seas"?

From the lyrics, we can deduce the narrator is the actual parent of Cassidy:

"Ah, child of countless trees.
Ah, child of boundless seas.
What you are, what you're meant to be
Speaks his name, though you were born to me,
Born to me,
Cassidy"

"Cassidy" first appears on Bob Weir's solo album "Ace", which is a Grateful Dead album in all but name. The band played on all songs, and even Robert Hunter participated in writing some of the lyrics. However, its first appearance on an official Dead release was on the acoustic live album "Reckoning".
7. What is the name of the lawman who refuses to arrest the title character of "Stagger Lee"?

Delia confronts Bayo, asking why he is so eager to arrest prostitutes but is afraid to go after the murderer of her dear Billy DeLions. His response:

Delia, of course, takes matters into her own hands."

The song is based on an old folk song, which is in turn based on real events. Lee Shelton was a St. Louis pimp, who got into a fight with Billy Lyons on Christmas night in 1895. During the altercation, Lyons took Shelton's Stetson hat. Shelton killed Lyons and quietly left with his hat. Shelton was eventually convicted of the murder in 1897 only to be pardoned. He returned to prison later on other charges, and that's where he died in 1912.
8. "Annie Bonneau from St. Angel" came to visit which Grateful Dead title character?

"All of my friends come to see me last night
I was laying in my bed and dying
Annie Bonneau from St. Angel
Say the weather down here so fine"

The Garcia/Hunter song "Black Peter" debuted on the studio album "Workingman's Dead", but the live version from the album "Bear's Choice" (and the platinum compilation "What a Long Strange Trip It's Been") is perhaps more widely known.
9. What Grateful Dead title character is described as "that hairy man, shadowboxing the Apocalypse and wandering the land"?

"Esau skates on mirrors anymore
He meets his pale reflection at the door
Yet sometimes at night I dream
He's still that hairy man,
Shadowboxing the Apocalypse
And wandering the land"

This is from the Weir/Barlow composition "My Brother Esau", which appeared on the cassette edition of "In the Dark" and as the B side of "Touch of Grey". Its first live performance was in 1983.
10. The narrator tells which title character that he was "feeling lost, lacking in some direction"?

This quote is from the opening lines of "Althea":

The first official release to feature this song is the eleventh Grateful Dead studio album, "Go To Heaven", released in 1980. It was the first album to include Brent Mydland on keyboards and vocals following the departure of Keith and Donna Godchaux.
Source: Author OofahLandian 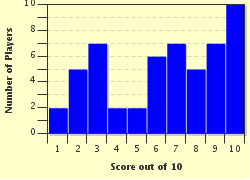 
Other Destinations
Explore Other Quizzes by OofahLandian