Various trivia about my favorite all time band, KISS!

Quiz Answer Key and Fun Facts
1. What was Gene Simmons' given name at birth?

When he moved to America at the age of eight his name became Gene Klein. Klein was his mother's maiden name.
2. What was the first movie KISS made?


Answer: KISS Meets The Phantom Of The Park

"KISS Meets The Phantom Of The Park" was a made-for-TV movie that aired in 1978.
3. What was Eric Carr's occupation before he joined KISS?

He was a stove cleaner in New York.
4. What happened to Ace Frehley on stage in Lakeland, Florida on December 11, 1976?


Answer: He was electrocuted.

Mark Wahlberg fell down the steps in the movie "Rock Star",and James Hetfield of Metallica got burned by pyro. Ace wrote "Shock Me" after this incident so he couldn't have forgotten the words to a song that wasn't written yet.
5. Is Paul Stanley's star on his right eye or his left eye?


Answer: The star is on his right eye.

Paul's star is always on his right eye. I did see a picture of the star on his left eye once in a magazine. After contacting the magazine I was told that the picture was reversed.
6. KISS did a "Got Milk" ad in 1999. Which two magazines did the ad appear in?

The ad came out in July of 1999 and only appeared in "Rolling Stone" and "Spin" magazine.
7. What was the title of the first KISS album?

"Hotter Than Hell" was their second album followed by "Dressed To Kill" and then "Alive!"
8. What three cities were used for the recording of "Alive III"?

"Alive III" was recorded live in Detroit, Cleveland and Indianapolis on the Revenge tour of 1992.
9. Which KISS album was never released in America?

"Killers" was only released outside of the United States but quickly became available as an import.
10. What year was the KISS album "Love Gun" released? 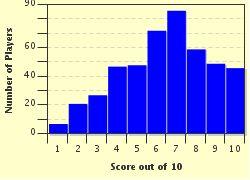 
Other Destinations
Explore Other Quizzes by Acelynk