This is a second quiz on impossible song titles. All chart references are from the U.S. Billboard charts unless otherwise specified.

Quiz Answer Key and Fun Facts
1. The love theme from the movie "Top Gun", when read literally, sounds like a death wish. Can you name it?


Answer: Take My Breath Away

"Take My Breath Away" by Berlin topped the charts in 1986. Berlin hailed from Los Angeles, California. The band first gained national notice in 1982 with the gold selling EP "Pleasure Victim". Berlin followed that with a best-selling album called "Love Life" in 1984. Vocalist Terri Nunn left for a solo career in 1987.
2. The title of this classic pop song from The Walker Brothers will leave you in the dark if taken at face value. Can you name it?

"The Sun Ain't Gonna Shine Anymore" by The Walker Brothers hit the charts in 1966. They were not brothers and none of them were named Walker. The band consisted of Scot Engel, John Maus, and Gary Leeds. The group's success was minimal and they disbanded in 1967. Scot Engel went onto a solo career in England with a series of Top Ten British albums.
3. The title to this Lionel Richie song makes me wonder how you get down from there. Name it.


Answer: Dancing on the Ceiling

It sold ten million copies and won a Grammy for Album of the Year. "Dancing on the Ceiling" was the title track of his 1986 album. Lionel Richie co-wrote the charity single "We Are the World" with Michael Jackson, which raised millions of dollars for famine relief.

Other notable hits by Richie include "Truly", "Say You, Say Me", "Hello" and "All Night Long".
4. Warren Zevon was noted for his sardonic humour. I suspect breathing rarefied air may have influenced him when he wrote "Things to Do in ____ When You're Dead". (Fill in the blank).

"Things to Do in Denver When You're Dead" was by Warren Zevon. Zevon was noted for his satirical and sardonic humour. The son of a professional gambler first released a solo album in 1969 called "Wanted Dead or Alive". It was not well received. It wasn't until 1976's self titled album, produced by long-time friend Jackson Browne, that he received critical notice.

His 1978 release "Excitable Boy" contained the hit "Werewolves of London". His other well known compositions include "Lawyers Guns and Money", "Roland the Headless Thompson Gunner", "Poor Poor Pitiful Me" and "Hasten Down the Wind".

He was diagnosed with inoperable mesothelioma in 2002. He decided to make one last album, "The Wind", which was released two weeks prior to his death September 7, 2003. "The Wind" won a Grammy for best contemporary folk album.

A posthumous tribute album followed called "Eat Every Sandwich" which featured Adam Sandler singing "Werewolves of London".
5. The title of this hit by The Ikettes brings to mind the best known work of Belgian cartoonist Peyo. Can you name this song?

Peyo's best known work was "The Smurfs" (yes those little blue creatures). "I'm Blue (The Gong Gong Song)" by The Ikettes charted in 1961. The Ikettes started as the backup singers for the Ike & Tina Turner Revue. The Ikettes became successful artists in their own right by charting their own hits records.

They followed up "I'm Blue" (The Gong Gong Song) with hits "The Camel Walk", "Peaches and Cream", and "I'm So Thankful". The original three Ikettes were Delores Johnson, Eloise Hester, and Joshie Armsted. Ike Turner never paid them a lot so the lineup changed over the years and at times included a fourth Ikette.
6. Deborah Harry sang this smash song about the fragile nature of love. One of the words in the title is defined as a brittle transparent solid with irregular atomic structure. What is the name of this song?

"Heart of Glass" was by Blondie. The group was formed in 1974 by Deborah Harry and Chris Stein. The initial lineup also included Clement Burke, James Destri and Gary Valentine.

"Heart of Glass" was from the band's third album "Parallel Lines", and reached number one in the UK and United States. "Call Me", "The Tide Is High", and "Rapture" were some of the hits they scored over the years.
7. The Beatles recorded several songs which had impossible titles. Which one of the following was sung by Ringo Starr and was found on "Abbey Road"?

"Octopus's Garden" was sung by Ringo. He also wrote the song. It appeared on "Abbey Road". "Abby Road" was the last Beatles album to be recorded (although "Let It Be" was the last released). It was a fitting swan song for the band. The album contained notable songs in the George Harrison penned "Something" and Lennon-McCartney's "Come Together".

The second side of the album featured a medley of songs/vignettes including "Mean Mr. Mustard" and "She Came in Through the Bathroom Window".
8. Which Joni Mitchell song brings to mind Guglielmo Marconi?

"You Turn Me On (I'm A Radio)" by Joni Mitchell was from her album "For The Roses". Guglielmo Marconi was the inventor of radio. Joni Mitchell was born Roberta Joan Anderson on November 7, 1943 in Fort McLeod, Canada. She married folk singer Chuck Mitchell in 1965 and began performing as Joni Mitchell.

She was arguably the most influential female recording artist of the last half of the 20th century. Her musical range has been shown in folk music, pop, jazz, and world music.

A partial list of her albums include "Clouds", "Ladies of the Canyon", "Court and Spark", "Miles of Aisles", "Hejira", and "Mingus" and "Blue". Some of the notable songs penned by Mitchell include "Both Sides Now", "Woodstock", "Blue", "Big Yellow Taxi", and "Free Man In Paris".
9. Which Tom Petty and The Heartbreakers song brings to mind film director George Romero?

Petty has also recorded as a member of The Traveling Wilburys . "Zombie Zoo" was from his solo album "Full Moon Fever". Hits "I Won't Back Down", "Free Falling", and "Running Down A Dream" were also from the album. One of the most notable bands in rock and roll history, Tom Petty and The Heartbreakers were inducted into The Rock and Roll Hall of Fame in 2002.

Film Director George Romero was known for his series of zombie movies, starting with "Night of the Living Dead".
10. Which of the following are real song titles?

All of them are real song titles.

"Frances Farmer Will Have Her Revenge on Seattle" was by Nirvana. It was from the album "In Utero".

"Birdhouse in Your Soul" was by They Might Be Giants. It was from their album "Flood".

"My Heart Has a Mind of Its Own" was by Connie Francis, and was a number one single in 1960.
Source: Author conundrum49 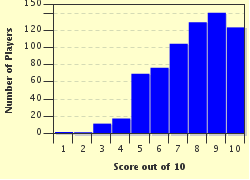 
Other Destinations
Explore Other Quizzes by conundrum49