Some of My Favorite Car Tunes Trivia Quiz

In my quiz, I give you a mixture of classic rock, pop, and country song lyrics from the 70s, 80s, and 90s era. All you need to do is guess the song in which they belong. You may find some to be your favorite car tunes!

Quiz Answer Key and Fun Facts
1. Which song was the Swedish band, ABBA's, second highest selling single and sold over ten million copies worldwide? "Though I never thought that we could lose, There's no regret. If I had to do the same again, I would, my friend"

"Fernando" was originally only released as a single, until it showed up on their "Greatest Hits" album. The song eventually reached number one on the Billboard Adult Contemporary Chart in 1975. "Dancing Queen" was ABBA's top selling single of their career.
2. These lyrics were written about a man trying to get his courage up to marry his girlfriend but was overwhelmed with the commitment of marriage. What was the song that was recorded by the band America? "I ain't ready for the altar But I do agree there's times, When a woman sure can be a friend of mine"

"Sister Golden Hair", a folk rock song, was written by Gerry Beckley, an original member of the band. They cut the single from their album, "Hearts", in 1975. Although it reached number one and stayed on the charts for one week, the song was controversial, in that it appeared to encourage the young generation to "shack up" or "live together" without the ties of marriage.
3. What popular song are these lyrics from, sung by the country duo, Howard and David, The Bellamy Brothers? "There's a reason for the sun shiny sky, And there's a reason why I'm feelin' so high, Must be the season When that love light shines all around us"

The talented duo hail from Darby, Florida, and have had much success in their musical careers. Neil Diamond's drummer recommended they record the song in 1976, which became a number one hit single, giving them the recognition they needed.
4. From these lyrics, which of these songs gave Celine Dion worldwide recognition? " 'Cause I am your lady, And you are my man, Whenever you reach for me, I'll do all that I can"


Answer: The Power of Love

"The Colour of My Love" was Dion's third, English language album, and was released in 1993. It also served another special purpose for the Canadian song-bird in introducing her love openly for her manager, Rene Angelil. It was so successful that three number one singles came from it, "The Power of Love" being one of them.

In 1993, it was one of the best-selling albums in musical history.
5. Although country music artist, Dolly Parton, wrote the lyrics below, it was Whitney Houston's version of the song that made it become one of the best-selling singles of all time. Can you name the song? "Bittersweet memories, That's all I have and all I'm taking with me. Good-bye, oh please don't cry, 'Cause we both know that I'm not what you need"


Answer: I Will Always Love You

Dolly cut the song as a single from her album "Jolene" in 1974. Although it did reach number one for a short period in the U.S., it wasn't until Whitney Houston sang it for the sound-track of the film, "The Bodyguard" (1992), that the song soared. In 1995, Dolly Parton and Vince Gill re-recorded it as a duet, but it was Whitney who took it to the top of the charts.
6. What song did The Eagles make popular from the lyrics below? "You can spend all your time making money. You can spend all your love making time. If it all fell to pieces tomorrow, Would you still be mine?"


Answer: Take it to the Limit

This soft rock song was written by three members of the group, Don Henley, Glenn Frey, and Randy Meisner. The single was released in November, 1975 from their album, "One of These Nights". It reached number four in the U.S.
7. Which song was the last US Billboard number-one hit single for Elvis Presley before his death in 1977? "Here we go again Askin' where I've been You can't see these tears are real I'm cryin?"

Written by Mark James, Elvis made a huge hit in 1969 with the song from his album with the same name. It was recorded in American Sound Studio, and the hit song stayed on the charts for a week at number one. Country singer and songwriter, Dwight Yoakam, recorded it in 2004 on his album entitled, "The Very Best of Dwight Yoakam".
8. What is the tune of the song below where you hear American singer and songwriter, Hank Williams, Jr., open up the theme for ABC's "Monday Night Football"? "Now my party pad is out in the woods, It's a long, long way from here to Hollywood. But I got some natural queens out on the floor, And 'ole Miss Mississippi just walked through the door"


Answer: All My Rowdy Friends are Coming Over Tonight

Hank Jr., living in the shadow of his father, yearned to play his music and be himself, not what someone else wanted him to become. He finally accomplished this on his 21st birthday when he announced that no one would tell him what to do, what to wear, and certainly, not what to sing anymore.

He became very popular in the early 70s with his outlaw, southern-rock style, and became very successful with his singing and songwriting as well. When his songs began to decline on mainstream radio, he was chosen to open the theme song for ABC's "Monday Night Football", using the tune to "All My Rowdy Friends are Coming Over Tonight" (1984).

His words became synonymous with the question, "Are You Ready For Some Football?" Like his father before him, Hank Jr. became a legend in his own right.
9. One of country music's legends, George Jones, recited these words in what some critics have called, "The greatest country song of all time". From the lyrics below, what was his enormous hit? "You know she came to see him one last time, Oh, and we all wondered if she would. And it kept running through my mind, This time, he's over her for good"


Answer: He Stopped Loving Her Today

After a downfall in his musical career for nearly six years, the song boosted Jones's confidence and comeback. He believed the song would not make it on the chart, feeling the lyrics were too forlorn. However, after it became his all-time biggest hit and signature song he stated, "A four-decade career had been salvaged by a three-minute song." Written by Bobby Braddock and Curly Putman, the single was released from George's album, "I Am What I Am" (1980), and earned him his first Grammy Award.
10. What popular hit was performed by country singers Kenny Rogers and Dolly Parton in 1983 and was written by the BeeGees? "You do something to me that I can't explain, Hold me closer and I feel no pain, Every beat of my heart We got somethin' goin' on"


Answer: Islands in the Stream

The single, "Islands in the Stream", was from Kenny Rogers' album, "Eyes That See in the Dark". He paired up with country music artist Dolly Parton, and together, their duet reached number one. It stayed on the charts for two weeks, and in 1984, was one of the highest selling singles of the year.
Source: Author Lilady 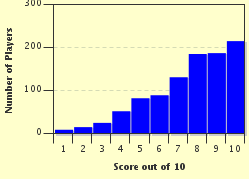 
Other Destinations
Explore Other Quizzes by Lilady