A quiz dedicated to My Chemical Romance.

Quiz Answer Key and Fun Facts
1. Where did My Chemical Romance get their name from?

From the book "Three Tales Of Chemical Romance."
2. What was the first song Gerard wrote for the band?

He wrote it with Matt Pelissier, their original drummer.
3. What was the first label My Chemical Romance was signed to?

Island Records is a real record studio, but the rest are made up.
4. Before becoming a band, what was Gerard Way's job in New York?

He was an animator in New York before he and Matt formed the band.
5. Who produced "I brought you my bullets, you brought me your love"?

All are or were in bands (Andrew Wood-Temple Of The Dog, Kyle Bishop-Grade, Max Collins-Eve 6), but local New Jersian Geoff Rickly produced it.
6. What month and year was "I Brought You My Bullets, You Brought Me Your Love" released?

It was the start of something wonderful.
7. What is the name of both video games made for My Chemical Romance?

Both really fun, 2d games that look like they're from the days of Atari.
8. What My Chemical Romance song did a fan turn into a video?

It's a cowboy, animated movie filled with gunfights, fire, and it's to be continued.
9. Who was NOT a member of My Chemical Romance by the time of the release of "Three Cheers for Sweet Revenge"?

Matt Pelissier was their first drummer but got kicked out before "Three Cheers" came out.
10. How many videos were made for "I'm Not Okay?"

One video is a live video of them playing, the other is the school based one, and the last one is a mod video.
Source: Author randomhero17 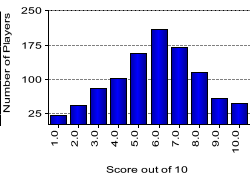 
Other Destinations
Explore Other Quizzes by randomhero17