A small, rather easy test about one of the greatest bands ever.

Quiz Answer Key and Fun Facts
1. Who was the first leader of the band?

"Take Up Thy Stethoscope And Walk" was written by Roger Waters, not Muddy Waters.
3. What instrument was Rick Wright playing in the early stages of the band that later would become Pink Floyd?

Rick began his rock career as a rhythm guitarist, later switching to piano and Farfisa organ. He can play cello, but not the drums.
4. Who was the sound engineer on some Floyd albums, who later started his own successful band?

Trevor Horn later created the Buggles, Trevor Rabin played in reformed Yes of the "90125" era. Chris Thomas did not start any band.
5. There are claims that "The Great Gig In The Sky" was co-written by Clare Torry.

Clare Torry simply added voice to an earlier composition. She later sued the band claiming that she co-wrote the song; some bootlegs show that an earlier version of "Great Gig..." was already very similar to the one known from "Dark Side..." minus the vocal.

Although Torry's vocal is what makes the track thrilling and memorable, it is debatable if adding vocal to a music written earlier counts as a co-writing credit. In an out-of-court settlement Floyds agreed to add ..."vocal composition: Clare Torry" - once again, it is debatable if this counts as a full credit. (See also Brooker/Fisher suit for "A Whiter Shade Of Pale").
6. In 1979 Waters presented two sets of songs to other band members, saying one of these sets will appear on the next Floyd album. One of the song sets was "The Wall", the other was...


Answer: The Pros And Cons Of Hitch-Hiking

The other set was released as Roger Waters' first solo LP.
7. Rick Wright co-wrote some songs on "A Momentary Lapse Of Reason"

His contribution on this album was small and he only played a few organ tracks.
8. Nick Mason co-wrote some songs on "The Division Bell".

Some of his musical ideas were considered, but no one finally made it to the album.
9. A famous scientist is heard on "The Division Bell".

His name is Professor Stephen Hawking. He wrote "A Brief History Of Time". His synthesized voice is heard at the beginning of "Keep Talking".
10. A famous Polish soundtrack composer contributed to David Gilmour's "On An Island".

His name is Zbigniew Preisner. He wrote music to many European movies, and also wrote orchestral parts for "OAI".
Source: Author Strzyz 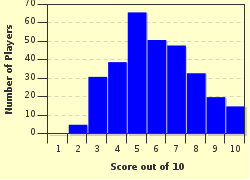 
Other Destinations
Explore Other Quizzes by Strzyz