I only put the best rock and roll songs on my jukebox. These classics are bound to bring back memories, but the questions still might stump you. (Background knowledge required for some questions.)

Quiz Answer Key and Fun Facts
1. From 1982, "Eye of the Tiger" was the theme song for "Rocky III". What group sang this movie theme turned Billboard Hot 100 number one hit?

The song was written after Sylvester Stallone was unable to get permission to use "Another One Bites the Dust" by Queen. Survivor formed in 1978.
2. What song from 1964 starts with the following spoken words? "Is she really going out with him? Well, there she is. Let's ask her. Betty, is that Jimmy's ring you're wearing? Mm-hmm Gee, it must be great riding with him Is he picking you up after school today? Uh-uh."


Answer: Leader of the Pack

When the song was recorded by The Shangri-Las, there were no musical charts. This caused the musicians to keep messing up. It took a total of 63 takes before it was deemed acceptable to producer George Morton.
3. What did Scott McKenzie tell you to wear if you're going to San Francisco in 1967?

"San Francisco (Be Sure to Wear Flowers in Your Hair)" was written by John Phillips from The Mamas And The Papas. It was the unofficial anthem for the Monterey Pop Festival.
4. Eric Clapton's career began in 1963 and has spanned decades. During the early years he was a member of several different groups. Which of these groups had a hit with "White Room"?

"Kind of a Drag" was written by Jim Holvey, who was a friend of the band's from Chicago. It was The Buckingham's only Billboard Hot 100 number one hit, although they charted a total of five times in 1967, but never had a hit after that year.

Girl, I still love you,
(OOH, I STILL LOVE YOU.)
I'll always love you
(OOH, I'LL ALWAYS LOVE YOU.)
Anyway, anyway, anyway."
6. Name the song that starts with following two lines: "When the truth is found to be lies An' all the joy within you dies"


Answer: "Somebody to Love" by Jefferson Airplane

This song was written by Darby Slick, husband of Grace Slick while they were members of Great Society. It became a hit when they brought it to Jefferson Airplane.

"Don't you want somebody to love?"
7. Which Styx song begins by being sung a cappella?

Since 2001, the Pittsburgh Steelers have adopted "Renegade" as an unofficial team song and play it at home games. The song was released on September 1, 1978.
8. Which group had a hit with "Crazy On You" in 1976?

Heart was originally based in Seattle, but moved to Vancouver when some of the band members could have been drafted during the Vietnam War. This severely limited their exposure in the U.S. market. After the war, they moved back to Seattle.
9. According to Three Dog Night, what did Mama tell me to do?


Answer: not to come

"Mama Told Me Not to Come" was released in 1970 and became a number one hit on the Billboard Hot 100. It was also the first number one hit played on American Top 40 during its premiere broadcast on July 4, 1970.
10. Name the group that released "Time of the Season" in 1968.

"Time of the Season" was not released as a single until 1969, a year after the band broke up.

"It's the time of the season
When the love runs high
In this time, give it to me easy
And let me try
With pleasured hands

To take you and the sun to
Promised lands
To show you every one
It's the time of the season for loving"
Source: Author 25or6to4 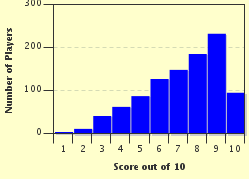 
Other Destinations
Explore Other Quizzes by 25or6to4