This quiz features questions about The Doors' album "Morrison Hotel."

Quiz Answer Key and Fun Facts
1. According to The Doors' drummer, John Densmore, this song is the only song in which musically, the group let Jim down.


Answer: Queen of the Highway

Some people believe this song is about Jim Morrison's relationship with Pamela Courson, while others believe it is related to Morrison's poetry and is about himself dressing up as a woman.
2. This song was written in 1965, much earlier than 'Morrison Hotel' was released. While putting 'Morrison Hotel' together, The Doors wanted to get back to their earlier sound and felt that using this song on the album would be a good way to do that.

Some radio stations play this song together with "Peace Frog" since it follows it on the album.
3. This song is about America's desire to be on the moon, although by listening to the lyrics, it may not seem that way.

Some people think that this song, along with "Crystal Ship", is about drugs or an acid trip; however, neither song is about drugs.
4. John Sebastian from the Lovin' Spoonful played harmonica on which song?

Even though The Doors usually didn't use a bass player, guitar great Lonnie Mack played bass on this song.
5. This song includes a "skiffle beat" created by The Doors' drummer John Densmore.

The expression, "Land Ho" was used by sailors after traveling on the ocean for long periods of time and finally seeing land.
6. Although this song was one of The Doors' first recorded songs, they did not release it until "Morrison Hotel" because the band agreed that the recording quality was not up to standard.

The Doors never played this song live because they thought it would sound insignificant compared to "The End."
7. This song includes a character that Jim Morrison created. The character is a woman from the old west who is known to be a 'lady of the night.'

The Doors began working on this song after a concert at the University of Michigan at Ann Arbor.
8. This was actually written in the studio. After Robbie Krieger came up with the guitar riff, they created lyrics for the song from poems found in Jim Morrison's notebooks.

The lyric in this song, "Blood in the streets of the town of Chicago" is believed to refer to the 1968 Democratic Convention.
9. This song is about the quest for the American dream, which unfortunately is never attained.


Answer: Waiting for the Sun

"Waiting For The Sun" is the title of The Doors' third album. They tried to include this song on that album, but they didn't like the way it came out. It ended up being released two years later on "Morrison Hotel."
10. The following lyrics are from what song: "You make me throw away mistaken misery Make me feel love Make me free."?


Answer: You Make Me Real

"Roadhouse Blues" was released as the B-side of this track.
Source: Author hockeygirly 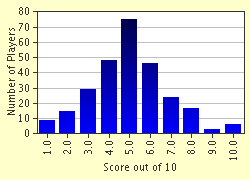 
Other Destinations
Explore Other Quizzes by hockeygirly