"The music was new black polished chrome and came over the summer like liquid night." Jim Morrison. Love them or hate them. The Doors combined poetry, theater, and intelligence in their music. Thanks to all for playing 1 and 2 in this series. Enjoy.

Quiz Answer Key and Fun Facts
1. "I found an island in your arms Country in your eyes Arms that chain Eyes that lie." Which one was number one?


Answer: Break On Through (To The Other Side)

"Break On Through (To The Other Side)" was the first song, and the first single off The Doors' debut album "The Doors" released in 1967. Despite friends, fans, and band members themselves calling local radio stations to request this new number, The Doors' first single peaked at number 106 on the U.S. Hot 100.
2. "The days are bright and filled with pain Enclose me in your gentle rain The time you ran was too insane We'll meet again, we'll meet again." What's the name of this tune?


Answer: I Can't See Your Face In My Mind

"I Can't See Your Face In My Mind" was featured on The Doors' second album "Strange Days" released in 1967. Just nine months after their successful debut, The Doors proved to be more than a one hit wonder with a great follow up album. Other songs included "People Are Strange" "Love Me Two Times" and "Moonlight Drive."
4. "What have they done to the earth? What have they done to our fair sister? Ravaged and plundered and ripped and bit her Stuck her with knives in the side of the dawn And tied her with fences and Dragged her down." What's the name of this number?

"Hello, I Love You" was featured on The Doors' album "Waiting For The Sun" released in 1968. With another number one hit under their belts, the commerciality of it had die hard fans and critics alike screaming sell out. Some also considered the music a rip off of The Kinks classic "All Day, And All Of The Night."
6. "Magic risin' Sun is shinin' deep beneath the sea But not enough for You and me and sunshine Love to hear the wind cry." What's the name of this song?

"Wishful Sinful" was featured on The Doors' fourth studio album "The Soft Parade" released in 1969. Another great song penned by Guitarist Robby Krieger. Morrison was the poet, but Krieger seemed to be the hit writer. Other's included "Touch Me" "Love Me Two Times" and "Light My Fire."
7. "Can you give me sanctuary I must find a place to hide A place for me to hide Can you find me soft asylum I can't make it anymore The man is at the door." What track is this?

"Indian Summer" was featured on The Doors' album "Morrison Hotel" released in 1970. This album garnered critical acclaim for The Doors getting back to the formula that made them the sweethearts of the intellectual scene, utilizing a more stripped down and raw style, and not the overly produced and lengthy recording sessions as with "The Soft Parade." The song "Indian Summer" was originally written in 1966 and part of The Doors' first album sessions. My personal favorite, it's one of their most sensitive songs in its simplicity and Morrison's voice is at its haunting best.
9. "Ashen lady, ashen lady Give up your vows, give up you vows Save our city, save our city Right now." Which song is this?

"Roadhouse Blues" is also found on "Morrison Hotel." The real "Morrison Hotel" was a hotel in the skid row section of Los Angeles, right next to a bar called "The Hard Rock." The manager of the hotel wouldn't allow the band to take any pictures, so the photo was taken from across the street. A great live version was first featured on "An American Prayer" released in 1978.
10. "The world on you depends Our life will never end Gotta love your man, yeah." Name the song.


Answer: Riders On The Storm

"Riders On The Storm" was featured on The Doors' final studio album "L.A. Woman" released in 1971. With longtime Producer Paul Rothchild out, and Sound Engineer Bruce Botnick in, The Doors delivered a blues-influenced masterpiece. "Riders On The Storm" would be the last song that Jim Morrison would ever record with The Doors, according to Keyboard player Ray Manzarek.

He would go on to be found dead in the bathtub of his Paris apartment in July of 1971. "Last words, out."
Source: Author dantecmdy 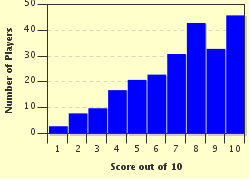 
Other Destinations
Explore Other Quizzes by dantecmdy