The Intro to the Kiss Klassic "Detroit Rock City" Quiz

How well did you pay attention to the opening sequence of "Detroit Rock City" on the original "Destroyer" release? Let's see. Have fun!

Quiz Answer Key and Fun Facts
1. Where does the newscaster say the accident happened?

Quite an interesting way to start the first track of the follow-up album to "Alive." With Bob Ezrin producing, you knew it would be different, but this intro gave you no clue as to what was coming.
2. Where was the driver that died in the wreck from?

The newscaster starts his story with "In Detroit, a Pontiac, Michigan youth was reported dead at the scene of a head on collision..." This ties the intro to the song with Detroit appearing in the news and the song title. Makes you wonder what the song is about.
3. What caused the accident?

The news continues, "the youth was reportedly driving on the wrong side of the boulevard..." With the continued information regarding the accident, at this point you know that either the song is about the youth or the wreck or both. The continued monologue just builds the anticipation for the song to begin.
4. How did the youth die?


Answer: Thrown through the windshield

"...and was catapulted through the windshield of his car." At this point, the first time I heard it, I knew that the song was about this fatal accident. I thought it was really cool that the song told the story from the dead driver's point of view. The emotional detachment of the newscaster makes the emotion of the song that much more powerful.
5. What happened to the other driver?

"The driver of the truck is reported to be uninjured." This piece of information was totally irrelevant to the story of the song. One could look at it as an indictment of the carelessness of youth, driving on the wrong side of the road, leading to catastrophe, while the responsible adult is okay.
6. County legislators were going to rally to the aid of this striking group of workers. Which one?

This is the final bit of news as the newscast fades out. Now that the newscast is finished, we are ready for the music. But Ezrin isn't finished yet. We get some more mundane noises, making our anticipation greater and greater.
7. It has long been generally believed that this member of the group played the radio newscaster.

It now appears that Bob Ezrin was the voice of the newscaster, but the idea that it was Gene is still very much out there.
8. What background noise do you hear the person listening to the news making?

I always thought that this was a morning newscast and I saw a guy getting out his cereal bowl, coffee cup, juice glass, silverware.
9. When the driver of the car gets in and starts the car, it starts on the first try.

This car sounds like a souped up little hot rod. Question...Is this the guy that just listened to the news, or is this the guy that got creamed going to the show the night before?
10. What Kiss classic is playing on the radio as the driver drives on?


Answer: "Rock and Roll All Nite"

No mistaking that killer riff of Ace's. I often wondered what kind of fan was listening to this song in the car. He wasn't really singing, kinda humming like he didn't know the words. At this point, one of the most recognizable opening riffs in Kisstory takes over, and the blitz begins.
Source: Author dipweed 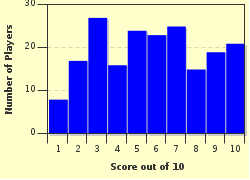 
Other Destinations
Explore Other Quizzes by dipweed