Here are some questions for the die-hard fans of the legendary shock-rock group non other than KISS. I would consider this a hard quiz.

Quiz Answer Key and Fun Facts
1. Which band member quoted in a 2007 interview saying "I had to be there to keep the KISS ship floating all those years because no one else wanted to" in regards to his band mate's lack of dedication?

Paul Stanley has openly admitted that he thinks Gene Simmons (his band mate of 35 years) has tarnished the band to a certain extent.
2. Who attempted to stab Gene Simmons on the 1979 "Dynasty" tour?

It all started when Peter accidentaly hit Gene in the head with a drum stick when he attempted to throw it into the audience. This provoked Gene to kick Peter in the shin with his 6 inch tall platform boots. After this Peter was the angry one, so he then broke a bottle in half and went after Gene with it when the concert was over.

This (not surpisingly) was Peter's last show with KISS until 1995.
3. Who co-wrote the song "Let's Put the X in Sex" with Paul Stanley for the 1988 "Smahses, Thrashes, and Hits" album?

One of many songs that Paul and Desmond wrote together.
4. Who is the first band member out of the ten members KISS has had over the years to have been shot by a gun?

Bruce was shot in the right leg by a gunman with a 9mm pistol in October of 2003 outside of the Rainbow Bar and Grill in Hollywood. Bruce was not the intended target and reports say a bullet grazed his head as well.
5. Who became the band's manager on the 1996 reunion tour?

He can be seen on pretty much every KISS documentary (video or book) from 1996 on that involves concerts.
6. Which band member is deaf in his right ear?

Most people think he is deaf in his right ear as a result of playing in front of extremley loud amplifiers for 35 years, but he was actually born like that.
7. What company produces the synthetic blood Gene Simmons uses during KISS shows?

Tape and fake blood. Weird combination, don't you think?
8. Who drummed on the "Dynasty" and "Unmasked" albums for the tracks that Peter Criss didn't?

Peter's drug and drinking problems were the reason for this.
9. Who has a very hard time remembering the lyrics to his own songs?

Gene is the only member to really ever have this problem. Paul Stanley publicly makes fun of him about this quite often.
10. What was Eric Carr's orginal make-up design suppose to be before the band chose to go with "The Fox" for his character.

There is a rare picture of Eric in this make up from when they were experimenting with it in 1980.
Source: Author RockExpert07 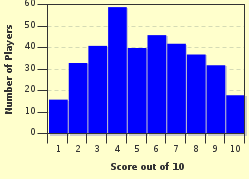 
Other Destinations
Explore Other Quizzes by RockExpert07