Why Won't Anybody Listen to Me? Quiz

Earworms are songs that are played so much they get stuck in your head - to the point of irritation. Here are ten songs my friends and I refuse to even listen to! Naturally, this quiz is biased with my personal opinions about irritating songs.

Quiz Answer Key and Fun Facts
1. "I throw my hands up in the air sometimes saying aaaay-ooo, baby let's go." Taio Cruz sings which of these songs, which is sampled above?

The song reached number one of multiple charts, and many households, such as my own, loved it. Unfortunately for me, my mom was slightly behind the curve, and only started listening to it several months after it was released. She played nothing but that song (she had a CD of only this song playing endlessly), and it quickly became an earworm for me that I wished never to hear again.
2. "Hey, I just met you, and this is crazy." Carly Rae Jepsen released this song. What song is it?

Carly Rae Jepsen's "Call Me Maybe" first appeared on her EP album "Curiosity" in 2012, but was released on her debut studio album "Kiss" as well. The song reached number one on the Billboard Hot 100, and was nominated for two Grammy Awards (though it did not win either).

The song was very catchy, but for some reason, I cannot bring myself to listen to it. Perhaps it was because I had at first loved it enough to play it on my phone on loop for hours at a time...
3. "I'll tell you what I want, what I really really want." Which of these songs is the Spice Girls song sampled above?

Topping the Billboard Hot 100 charts for four weeks is impressive, but the Spice Girls' debut single "Wannabe" became the best-selling song by a female group in the world at the time of its release in 1996. The song can be found on their debut album "Spice".

Is it possible to actually like an irritating earworm song? "Wannabe" always annoys me when it comes on, but I sing it every time. And whenever people cannot make up their mind, I tell them to "tell me what they want, what they really really want."
4. "Yo! Listen up. Here's the story about a little guy..." This colorful song, released by Eiffel 65, is sampled above. Can you name it?

"Blue (Da Ba Dee)" was released as Eiffel 65's first single in 1998. It can be found on their 1999 album "Europop". The song reached number six on the Billboard Hot 100. Adversely, however, it reached number 14 on Rolling Stone magazine's Top 20 Most Annoying Songs, and many around the world would switch the radio station if it played.

I still enjoy the song, however, and I find it wondrously entertaining to play the song on my phone around my friends who cannot stand the catchy earworm.
5. "If you liked it then you should have put a ring on it." Beyonce sings the phrase above in which of her hit songs?

"Single Ladies" was released in 2008 and can be found on Beyonce's 2008 album "I Am... Sasha Fierce". The song reached number one of the Billboard Hot 100, and it became a quadruple platinum selling single. It also earned Beyonce three Grammy Awards.

All those accolades do not mean I don't find it annoying, however. Between the repetition of a single phrase and the overplaying of it on the radio, it became an annoying earworm to me.
6. "I would walk 500 miles and I would walk 500 more." What is the name of the song sampled above, which is sung by the Proclaimers?

The Proclaimers released their famous "I'm Gonna Be (500 Miles)" in 1988, and it can be found on their 1988 album "Sunshine on Leith". The song did not reach the top ten on charts upon its original release in 1988. However, it found its way into the top five on the Billboard Hot 100 when it was featured in the film "Benny and Joon".

On the television show "How I Met Your Mother", this song is regarded as everybody's most annoying earworm. However, when one hears the song long enough, it becomes a favorite. I had originally felt the same way; I had not liked the song until I heard it nonstop for hours at a time.
7. "So come move your hips, sing oh-wa-ah-ah." This very catchy song, originally Swedish, is called what?

"Caramelldansen" was originally released by Caramell in 2001. It can be found on their album "Supergott". In 2006, the song became an internet sensation when countless parodies of the SpeedyCake remix were released on YouTube. Called the "Uma Uma Boom" in Japan, the explosion of videos with various characters dancing to the song made "Caramelldansen" quite well known around the world. The song's super growth in popularity even caused Caramell to reform as the Caramella Girls in 2008 after six years of separation.


Answer: What Does the Fox Say?

"What Does the Fox Say?" (also simply called "The Fox") was released in 2013 by Ylvis. The song reached number six on the Billboard Hot 100 and became an internet sensation. Ironically, the song was intended as an "anti-hit" for their Norwegian talk show, and they never intended for the song to be released on an album or otherwise.

I love singing this song at karaoke, and I quite enjoy watching those around me groan and moan in disbelief and sadness that I chose the song.
9. "See I remember we were driving, driving in your car." Tracy Chapman sings which of these vehicular songs?

"Fast Car" was released in 1988, and it can be found on Tracy Chapman's self-titled debut 1988 album. The song gained popularity when she was featured on the Nelson Mandela 70th Birthday Tribute, which helped her song reach number six on the Billboard Hot 100.

Imagine my horror when I discovered that both of my parents hated this song! When I first heard it, I loved it, and it became my favorite song shortly after and I listened to it all the time. It is still one of my favorites today, and one of both my mom and my dad's least favorites.
10. "Gotta have my bowl, gotta have cereal." What is the name of this internet-famous song, sung by Rebecca Black?

Rebecca released "Friday" as a single in March of 2011 on YouTube. The song somehow found its way into everyone's head, but it was not a positive thing. In September of that year, with over 3 million dislikes by YouTube users, the song was considered to be one of the worst songs of all time. Interestingly, the song reached number 58 on the Billboard Hot 100, even though the song was only played on the radio 12 times during its debut week.

I chose this song particularly for the earworm effect it has on Kyleisalive. You're welcome.

The other options also happened to be internet sensations at one time or another. I actually quite enjoy "The Duck Song". If you are interested in more YouTube songs of varying humor, weirdness, and just plain stupidity, there are several lists online sharing their favorite "Famous YouTube Songs".
Source: Author salami_swami 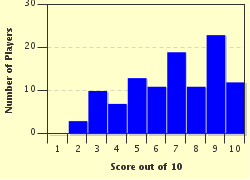 Related Quizzes
This quiz is part of series Commission #35:

We let our contributors run wild and free in this 35th Commission. This time, our Author's Lounge Commission-goers had no restrictions on titles, so anything goes! This Commission launched in September 2014.


1. Tap Dancing on Thin Ice Easier
2. Moveable Feasts Average
3. By Request Easier
4. It's Probably Just the Wind Average
5. Allons-y Alonso Easier
6. What's Next? Average
7. Welcome to the House of Fun Easier
8. Get Off the Bus! Easier
9. My Mother Said "No" Average
10. Whatchamacallit Tough
11. Earworms for Dummies Average
12. Things That Don't Go Bump In The Night Average