The questions in this quiz relate to people who bear some form of the name Elizabeth. At least, most of them are people!

Quiz Answer Key and Fun Facts
1. This American woman, whose real first name was probably Elizabeth, is thought to have murdered two close relatives with an axe. She lived in Massachusetts in the late 19th and early 20th Centuries. By what diminutive is she best known?

Lizzie Borden's full name is sometimes given as "Elizabeth Andrew Borden" and sometimes as "Lizzie Andrew Borden". She was born in 1860 and died in 1927. In August, 1892, someone murdered Lizzie's father Andrew and stepmother Abby with an axe. Lizzie was arrested and tried, but acquitted for lack of evidence. She is believed to have been guilty, but she remained in the same area until her death.
2. Her real first names were Elizabeth Ruth, and she was an actress and favourite pin-up girl in the 1940s. Her legs were insured by her movie studio for a million dollars! By what diminutive is she best known?

Elizabeth Ruth "Betty" Grable was born in 1916, in St. Louis, Missouri and died in California in 1973. Her movies include "Down Argentine Way" and "How to be Very, Very Popular", and at one point she was the highest paid star in Hollywood. Her legs were certainly worth a great deal, and she was known as "The Girl with the Million Dollar Legs".
3. Dick Turpin the highwayman of popular (if not too accurate) history had a mare whose name was a form of the name Elizabeth. This mare's name was Black ____ .

Highwayman Richard "Dick" Turpin, was born in Essex in 1705 and hanged at Tyburn in 1739. Many legends have grown up about Turpin and his splendid mare, Black Bess, but most of them are unlikely to be true. Whether or not Turpin actually owned a mare named Black Bess, she is firmly entrenched in history by now.
4. This 16th Century Elizabeth was the last of her line. She had an elder half sister and a younger half brother. One of her nicknames was "Gloriana" but she is also known be a three word epithet. The first two words are adjectives. The third is which form of her name?

Elizabeth Tudor was born in 1533 to King Henry VIII and his second wife, Anne Boleyn. Her half sister Mary died childless, and her brother Edward did not survive childhood, so Elizabeth became queen in 1558. She died in 1603. During her reign she was known as "the Virgin Queen", "Gloriana" and "Good Queen Bess".
5. This engaging character made her debut in 1930. She has black hair in spit curls, long, elegant legs and favours red shoes. She appears in movie cartoons, and on calendars, plates and figurines. Her first name is a form of Elizabeth and her surname begins with B. She is...?

Betty Boop was created in 1930 by Grim Natwick of Fleischer Studios for a cartoon called "Dizzy Dishes." Originally, Betty was a cute dog figure, but by the time "Betty Co-Ed" was made soon afterwards (1930 or 1931), she had become human, with her dog ears turned into earrings. Betty appeared in over 90 films, the last in 1939. Betty Boop items are still popular collectables.
6. This Elizabeth was the third of four famous sisters. The girls were book characters, but based on a real family. Their homely adventures in 19th Century Concord were almost instantly popular, and remain in print in the 2000s. The character in question was the "good" girl of the four, but she died young. Her surname begins with M. What is the diminutive by which she is known?

Beth March was the peacemaker among the March sisters. The elder pair, Meg and Jo, and the younger sister, Amy, all had character flaws, but Beth was always sweet. Beth became very ill in "Little Women" (1868), and died in "Good Wives" (1869).

Author Louisa May Alcott was born in 1832 and died in 1888. She used herself as a model for Jo March, her sister Anna for Meg, youngest sister May became Amy, and Lizzie was transformed into Beth.

Alcott's treatment of Beth has been criticised, but apparently Lizzie really did contract scarlet fever, recover for a while, and then die in 1856.
7. Actress Ruth Elizabeth Davis was known by a diminutive of her middle name. Another, younger, actress was named after her, but she was given the diminutive as her official first name. What was this name they shared, but which they pronounce in different ways?

Bette Davis (who pronounced her name "Betty") was born Ruth Elizabeth Davis in 1908 and died in 1989. She chose her stage name from the 1840 book "Cousin Bette" by Honore de Balzac.

Bette Midler was born "Bette Davis Midler" in Hawaii in 1945. Her name is pronounced "Bet".
8. This 16th Century lady's real name was Erzsebet. In some of the writings about her this is Anglicised to "Elizabeth" but she is generally known by another variation. Erzsebet was a noblewoman with a very nasty habit. The Countess of Transylvania, her name is often written as...

Countess Elisabeth Bathory was born in Hungry in around 1560, and died in 1614. The Countess was cruel, and encouraged to be even worse by various people who introduced her to black magic. Her main preoccupation seems to have been retaining her youthful bloom; with this ambition she is said to have bathed in (and even drunk) the blood of up to 600 young women.

As a noble she could not be executed, so she was walled up for the last four years of her life.
9. This lady is the heroine of a 1985 movie. Her character bears a variation of the name "Elizabeth" or "Isabel". Under a curse, she is a woman by night and a hawk by day, while her lover is a man by day and a wolf by night. What is her name?

Isabeau is played by Michelle Pfeiffer in the film "Ladyhawke". Her hero, Etienne Navarre, is played by Rutger Hauer, with Matthew Broderick providing the comedy in the role of Philippe "Mouse".
10. This singer/actress was born to a famous mother (whose original name was Frances Gumm) and father. She has a half sister named Lorna and half brother named Joey. She bears a form of the name Elizabeth. What is her name?

Liza May Minelli, daughter of Judy Garland and Vincente Minelli, was born in 1946.
11. This animal character appeared in books and a movie, and bore a form of the name "Elizabeth". Her biographer's name was Joy Adamson. What was the character's name?

Joy Adamson (1910 - 1980) raised Elsa the lioness from a cub, and then set her free. Elsa was born in 1957, and Joy wrote her story "Born Free" in 1960.
12. This Elizabeth was a maid of honour to Queen Elizabeth the First. She seriously displeased the queen by marrying Sir Walter Raleigh. By what diminutive was the lady known?

Elizabeth "Bess" Throckmorton, daughter of Nicholas Throckmorton and Anne Carew, was born in around 1565 and married Sir Walter Raleigh in 1592. They were both sent to the Tower of London for this indiscretion. After Raleigh was executed in 1618 Bessie is said to have carried his embalmed head about with her until she died in around 1647.
13. This character began life in a play in 1913. She is a Cockney flower seller, whom a professor decides to turn into "a lady". Her story was later made into a famous musical comedy. She bears a form of the name Elizabeth. What is her first name?

Eliza Doolittle was the heroine of George Bernard Shaw's play "Pygmalion". The musical comedy (and film) is called "My Fair Lady", and has a different ending.
14. This actress played a part in one of the longest-running TV science fiction series ever. The character she played was named Sarah Jane Smith, but which form of the name Elizabeth does the actress use herself?

Actress Elisabeth Sladen (born in Liverpool in 1948) played the part of Sarah Jane Smith in "Dr Who" for more than three years from 1973-76. Elisabeth Sladen married actor Brian Miller, and their daughter, Sadie, was born in 1985.
15. These Elizabeths are actually one woman; the actress and the CID character she played in a long-running British Police drama series. Their surnames were Davidson and Rawton, respectively, but what versions of Elizabeth did they use as their first names?

Actress Libby Davidson played WDC Liz Rawton in "The Bill" from 1996 - 2000, and appeared later as Acting DCI in guest roles in the same programme. Libby Davidson was born in Newcastle.
Source: Author Sallyo 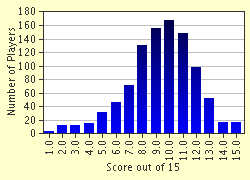 Related Quizzes
1. A Variety of Edgars Tough
2. Are You Curious, George? Very Easy
3. Elizabeth Who Too Average
4. Dearest, Loveliest, Elizabeth Tough
5. Francis and His Famous Friends Average
6. Who am I? GEORGE is the name of the game Tough
7. Edward, the Wealthy Guard Easier
8. George without Dragon Easier
9. Famous Gordons Tough
10. A Man Called Jean Average
11. Let George do it! Average
12. What's in a Name? Average