This is the second and last part of my quizzes on myths about Elizabeth I.

Queen Elizabeth did not personally knight Francis Drake although she was present on the Golden Hind when he was knighted. She ordered the French Ambassador to do it in her stead. This was a shrewd political move. The Queen was aware that the Spanish were protesting about Drake "the pirate" who plundered their ships, and by getting the French Ambassador to knight Drake, it made it seem that the French supported his activities.
2. Queen Elizabeth kept the letter that Robert Dudley sent to her before his death in her treasure box beside her bed, where it was found fifteen years later when she herself died.

She had written on the letter "His Last Letter". No one knows if the story about her locking herself in her room after his death until a worried William Cecil had the doors broken down to gain access, is true or not.
3. Queen Elizabeth was extremely vain, and as she got older, refused to have any mirrors in any of her palaces.

Although Elizabeth was very concerned about her appearance, her vanity has been exaggerated. It was court culture to flatter the monarch, and Elizabeth had to play the part of the flattered monarch, whether or not she really believed what people told her about herself. Elizabeth had to look and dress better than everyone else, as she was the monarch and it was expected. There is no evidence that the Queen had all the mirrors in the palaces removed, although the origin of this rumor is difficult to trace, and may well have been circulating her own lifetime.
4. The Earl of Essex sent the Queen a ring before his execution, but one of the Queen's ladies did not give it to her, for which Elizabeth never forgave her.


Answer: False: The Earl never sent the Queen a ring before his execution

In all probability, this story is apocryphal, although it has gained immense popularity. It is the kind of story that makes an event more dramatic and romantic. The story was probably created in the seventeenth century.
5. Queen Elizabeth hated Roman Catholics.


Answer: False: Elizabeth did not care what other people's religions were

Queen Elizabeth was remarkably tolerant of different religions. "There is only one Christ, Jesus," she said, "only one faith. All else is a dispute over trifles." Her government was forced by circumstance to take a harsher stance against Catholics than it wanted to do, and Elizabeth was never comfortable with the persecution of a person for their faith.
6. Queen Elizabeth's ghost was seen walking the corridors of Richmond Palace while the Queen lay dying.

This was a story made up by one of Queen Elizabeth's maids of honor who wanted people to believe that the Queen had been a witch and was doomed to walk the earth, not to rest in peace in Heaven. This Maid of Honor, Elizabeth Southwell, had become a Roman Catholic and wanted to undermine the Queen's continued popularity for political reasons.
7. On her deathbed the Queen whispered Robert Dudley's name.


Answer: false: Elizabeth was beyond speech at the time of her death

Accounts of Elizabeth's death do not mention that she whispered his name. If she had whispered his name, then she would probably have said "Robin", which was what she and a few others called him. If she had whispered "Robin", then this could also have meant Robert Devereux, Earl of Essex, who had also been one of her favorites, and whose recent execution for rebellion still troubled her greatly.
8. Queen Elizabeth's last words were: "All my possessions for a moment of time."


Answer: false: She was beyond speech at the time of her death

These words often referred to as "Queen Elizabeth's last words" are apocryphal. The accounts of her death by witnesses do not mention them. In all probability, Queen Elizabeth had lost the power of speech sometime before her death, and no one knows what her last words were.
9. Queen Elizabeth's ghost is said to haunt Windsor Castle


Answer: True: It has been seen by many people, the latest 'sighting' being in 1998

The ghost of a lady dressed in black has been seen by several people walking in the library of Windsor Castle and is said to be the ghost of Queen Elizabeth. The ghost has also been seen walking on the castle walls. However the ghost is said to wear a black veil over her face so, if the legend is true, it may not be the Queen's ghost after all but the ghost of another Elizabethan lady.
10. This quote is said to of been spoken by Queen Elizabeth upon learning that she had become Queen. "This is the Lord's doing and it is marvellous in our eyes." Myth or fact?


Answer: False: There is no evidence of this

This quiz was reviewed by FunTrivia editor bloomsby before going online.
Any errors found in FunTrivia content are routinely corrected through our feedback system.
Most Recent Scores
Feb 03 2023 : Guest 73: 1/10
Jan 25 2023 : Guest 98: 4/10 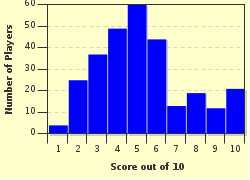