The Life of Elizabeth I Trivia Quiz

This is a quiz on the life and times of Britain's Queen Elizabeth I. I've tried to put the questions in some chronological order.

Quiz Answer Key and Fun Facts
1. Elizabeth I was born on 7th September 1533 in which English palace?

All of the palaces above had significance in Elizabeth's mother's life. She married Henry VIII in York Place (which was on the Thames), was resident in Hampton Court Palace during their marriage and grew up at Hever Castle in Kent.
2. Elizabeth, her half-brother Edward, and this person often had lessons together when they were younger.

Catherine and Mary were Jane's sisters. Mary was also a good seventeen years older than Elizabeth and Edward.
3. After her father's death, Elizabeth was invited to stay with her stepmother, Catherine Parr, and her new husband, Thomas Seymour. In which palace did they stay?

Elizabeth was rumored to have had an affair with Thomas Seymour there. When this reached Catherine's ears she quietly sent Elizabeth away. Catherine died later in childbirth, and Thomas was executed for trying to get into the king's bedrooms without his leave.
4. Elizabeth was held prisoner in the Tower of London after a failed rebellion against Mary I, her sister. In which section of the Tower was she kept?

Elizabeth was held prisoner for three months before Mary's advisors tried to have her executed. They failed, and were forced to let her go.
5. After she was released from the Tower, Elizabeth was taken to Woodstock accompanied by this man. Name him.

I hope you didn't pick Wyatt ... He was the one who orchestrated the rebellion and almost had Elizabeth killed. Edward Courtenay was almost Elizabeth's husband.
6. Which of the following men did not ask for Elizabeth's hand in marriage?

Francis became King of France at the age of just 15. By this time he had already married Elizabeth's cousin, Mary, the future Queen of Scots. His short but eventful life came to an end just 18 months into his reign at the age of just 16.
7. It was said that Elizabeth I was in love with Robert Dudley. When his wife died in suspicious circumstances, Elizabeth was blamed. What was the name of Dudley's wife?

She was killed falling down a flight of stairs and broke her neck. Suicide? Or not?
8. This Councillor of Elizabeth's was the one who effectively brought Mary, Queen of Scots to the block. Name him.

He was very loyal to Elizabeth (and later to James I). He was an utterly ruthless schemer and head of the then equivalent of the secret service. In fact, he was so unscrupulous that he was rumoured to be an atheist.
9. Elizabeth refused the sovereignity of the Netherlands in which year (this is the first time)?

Elizabeth refused once again in 1585, ten years later, but took them 'under her protection'.
10. Sir Walter Raleigh laid his cloak in the mud for Elizabeth to walk over.

This is nothing more than a popular legend. Thank you for taking my quiz!
Source: Author meals 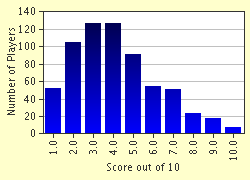 
Other Destinations
Explore Other Quizzes by meals