This is another quiz on England's greatest monarch, Elizabeth I who reigned from 1558-1603 and saw many accomplishments during her reign.

Quiz Answer Key and Fun Facts
1. Many historians believe that Elizabeth I suffered from what disorder?

After studying reports made by Elizabeth's physicians and reading accounts from people who attended dinners with the Queen, historians began to believe that she was anorexic. One of Elizabeth's physicians wrote, "She is so thin that you can count her bones." Many people that had attended dinners with the Queen said that she barely touched her food. Elizabeth is always described as being extremely thin. All of this has made many historians believe that the Great Queen suffered from anorexia. One website source is www.hnn.us/roundup/archives/42/2005/09 and another website source is www.hup.harvard.edu/books/PSY-complete.html
2. What two instruments was Elizabeth said to be extremely talented on?


Answer: virginals and the lute

Elizabeth enjoyed music much like her father, Henry VIII, who composed music as well as played it. Elizabeth loved music and encouraged composers at the time.
3. What dance did Elizabeth order to be played each morning?

Elizabeth loved to dance and she ordered that The Galliard be played every morning so that she may keep herself fit. She loved to dance with her courtiers and was extremely fond of The Volta.
4. In 1570 Pope Pius V issued a Bull against Elizabeth I. What did it say or do?

This Papal Bull put immediately put English Roman Catholics under suspicion as potential traitors. The claims of Mary, Queen of Scots, and of Spain, to the throne of England, all appealed in varying degrees to this Bull.
5. What palace was considered to have a spell cast upon it because nearly everyone who entered was stricken by smallpox?

After that the lords pushed Elizabeth to marry and produce an heir when she had recovered. Elizabeth however, refused to do so.
6. King Philip of Spain sent further fleets of ships to England after the defeat of the Spanish Armada.

Although King Philip sent other fleets against England in the 1590s, none was as significant, or as threatening as that of the great Armada of 1588, and none has captured the imagination of successive generations as much.
7. What did a lady of Queen Katherine Parr's court say of the Princess Elizabeth's religious feelings?

A lady of Queen Katherine Parr's court said this of the Princess Elizabeth to a group of ladies. Queen Katherine read books on the new Faith and passed them on to the Princess Elizabeth. The lady of Queen Katherine's court however felt that Elizabeth would change her religion for whatever was suitable to ensure her survival at the time. Elizabeth did say that she was a Protestant during her brother's reign and a Roman Catholic during her sister's reign.
8. Who did the Roman Catholic Church and its followers believe was the rightful Queen of England?

The Roman Catholic Church believed that Elizabeth was illegitimate because they believed that her father's first marriage to Katherine of Aragon remained valid (unti her death) and that her father should not have married Anne Boleyn because he was committing bigamy. To them, Mary was the rightful Queen of England although the English people proclaimed Elizabeth the Queen and most other European countries recognized Elizabeth as the Queen of England.
9. What did King Philip of Spain's son, Philip III, say was the reason for the war between Spain and England?


Answer: A clash of personalities

Although the lords said that when asked if James VI of Scotland should succeed her, Elizabeth signed yes in the last few months of Elizabeth's life she could not talk. Elizabeth did not sign 'yes' for James VI or anyone to succeed her. The lords just said that she had so there would be a smooth succession. Elizabeth never named an heir, she said that she knew what it was like to be the heir to the throne. To her dying day she refused to name an heir. 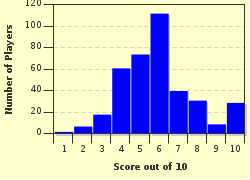