Myths about Elizabeth I: Part 1 Quiz

I decided that since there were no quizzes on here concerning myths about Elizabeth I, I would make one. So, can you decide what is a myth and what is fact?

Quiz Answer Key and Fun Facts
1. Young Elizabeth was so neglected by her father, Henry VIII, that she had to wear clothes that were too small.


Answer: True: Lady Bryan had to write to Henry VIII for new clothes

Her governess, Lady Bryan, had to write to the King to ask for new clothes to fit the growing child.
2. Princess Elizabeth disliked her cousin, Lady Jane Grey.


Answer: False: There is no evidence the two did not get along and they had lessons together

This is a popular legend, but there is no evidence that the two girls did not like each other. They spent quite a lot of time together as children, and shared a love of learning.
3. On the death of Thomas Seymour, Elizabeth whispered: "This day died a man of much wit, but very little judgment".


Answer: False: there is no evidence to support this and it orginated in the work of a 17th century historian

These words are apocryphal and originated in the work of a seventeenth century historian.
4. Princess Elizabeth was so heartbroken on the death of Thomas Seymour, that she vowed never to marry.


Answer: False: this is just a legend and there is no evidence for it

Again this is just a legend, and probably came about as people tried to work out why the Queen did not marry. In the past, marriage was considered the only desire of a woman's heart, and people could not understand why a woman who had every reason to marry opted to remain single.
5. Princess Elizabeth and Robert Dudley were both imprisoned in the Tower of London at the same time, and only a walkway separated them.


Answer: True: both for the same crime: trying to raise a rebellion against Mary I although Elizabeth had no knowledge of the rebellion

But they may not have seen as much of each other as some 'romantics' would have us believe!
6. Queen Elizabeth was afraid of mice.


Answer: True: it's said she would climb on a chair screaming if she saw one


Answer: False: she was known for a smile that could 'melt hearts'

Queen Elizabeth was famous for a smile that could melt peoples hearts. She also had a good sense of humor and loved to laugh.
8. Queen Elizabeth had a very bad temper.


Answer: True: she generally only got angry for a good reason, though

Although generally good natured, Queen Elizabeth could display right royal anger if provoked! Once she threw her slipper at Walsingham, and if really angry, would threaten to send people to the Tower. Those who married without her consent, could well find themselves under lock and key.

Her bark was usually worse than her bite, however, and although Elizabeth has earned the reputation of "The Ice Queen", this is wholly undeserving, as even her contemporaries noted that the anger of other monarchs was far more frightening than the anger of their Queen. Elizabeth usually only got angry if there was good cause.
9. Queen Elizabeth beat her maids of honor regularly.


Answer: False: there is only one reported incident of this

There is only one recorded instance of Queen Elizabeth striking a maid of honor. This was Mary Shelton who had married without the Queen's permission. Elizabeth got angry when her maids did this, as she was entrusted by their parents to find them a husband, and their behavior was against court custom as well as being an act of disloyalty. Reports that Elizabeth struck a girl with a candlestick are entirely false. Elizabeth did not generally strike people, and in her entire reign, only ever struck a Councillor once.

This was the Earl of Essex who had greatly insulted her, and it is a credit to Elizabeth that he did not suffer more.
10. Queen Elizabeth swore and spat.


Answer: True: she would swear relentlessly when angry

Sometimes Her Majesty the Queen was less than royally dignified! When angry, she would swear relentlessly, and once spat on the clothes of an unfortunate courtier who had not dressed to her liking.
11. Queen Elizabeth had lots of lovers.


Answer: False: her one true love was Robert Dudley, Earl of Leicester

Although it has been said that Queen Elizabeth had lots of different lovers, many historians believe that she only ever had one true love. This was Robert Dudley, Earl of Leicester, whom she might well have married had the political circumstances been more favorable to the match. Stories of relationships with men like Christopher Hatton, Water Raleigh, and the Earl of Essex are false.
12. Queen Elizabeth had secret children.


Answer: False: there is no evidence that she ever bore any child

Over the centuries, there have been many stories that Queen Elizabeth had secret children. Some people today still maintain that she did, and believe that Francis Bacon and the Earl of Essex were her sons. In fact, there is no evidence that the Queen ever bore a child, and it would have been virtually impossible for her to have hidden a pregnancy from her court. All the evidence suggests that she really was "The Virgin Queen" that she claimed to be.
13. On one or more occasions Queen Elizabeth dressed relatively plainly to disguise herself as 'an ordinary woman'.


Answer: True: she once dressed as a maid so she could play a trick on Robert Dudley


Answer: False: She did at least once mention her to a Foreign Ambassador, defending her mother's reputation

She did at least once mention her to a Foreign Ambassador, defending her mother's reputation. Statements like "never talked" have to be treated with extreme caution. Just because the official records might not mention that Elizabeth spoke of her mother does not mean that she never spoke of her. In 1575 she had a ring made which contained a picture of both her and her mother in it. She must have mentioned her mother to have had this made.

You can see the remarkable ring at the Tudor History site.
15. Queen Elizabeth was bald.


Answer: False: the Earl of Essex reported the queen to have hair all about her ears just a few years before her death

It has often been said that Queen Elizabeth became bald at the age of thirty, but in fact there are references to her having her own hair well into her sixties. In the 1580s she gave a lock of her now graying hair to Philip Sidney (which is still on display in Wilton House, Wiltshire) and only a few years before she died, Robert Devereux, Earl of Essex, burst into her bedchamber without permission and saw the aging Queen with "her hair all about her ears". Elizabeth's high forehead in her paintings may have been natural, may have been exaggerated by the portrait painters who knew that the Elizabethans considered a high forehead to indicate intelligence, may have been due to that fact that the Queen wore wigs and may have shaved the front of her hair to make them sit more easily, or the Queen may well have had some hair loss due to the lead in the "mask of youth" make-up that she wore on her face.

But even if she did lose some of her hair in this way, and it is by no means certain that she did, the Queen was never bald.
16. Queen Elizabeth had a sixth finger on one hand like her mother.


Answer: False: It is debated if Anne Boleyn herself had a sixth finger

Elizabeth did not have an extra finger on one hand. Neither is it certain that Anne Boleyn herself had six fingers on one hand.
17. Queen Elizabeth had black teeth.


Answer: True: the Elizabethans were fond of sugary foods. They tried to take care of their teeth, but to no avail

The Elizabethans were very fond of sugary foods, and although they tried to take care of their teeth by cleaning them, they were not able to control tooth decay, and this turned their teeth yellow and black in time. It was noted by Foreign Ambassadors that Queen Elizabeth had black teeth. She also had some teeth missing, which sometimes made her speech difficult to understand.
18. Queen Elizabeth was so afraid of having a tooth taken out, that one of her Archbishops had to show her that the pain was bearable by having a tooth out himself.


Answer: True: She had been suffering from a severe toothache

Queen Elizabeth had suffered for a long while from severe toothache, but was too afraid to have her tooth out. After seeing that the Archbishop could tolerate the pain of the extraction, and that the procedure was rather simple, she agreed to have her troublesome tooth out. However, the loyal Archbishop had to go through the painful procedure of having another tooth extracted before the Queen was satisfied that it was safe!
19. Queen Elizabeth had nicknames for her favorite courtiers.


Answer: True: Queen Elizabeth nicknamed all of her favorite courtiers

Elizabeth called Robert Dudley, Earl of Leicester her "eyes", William Cecil was her "spirit" and Robert Cecil was her "pigmy" or "elf", while Sir Christopher Hatton was her "mutton" or "lids"; Francis Walsingham was her "moor" and she even nicknamed her political suitor, Francis, Duke of Alencon, her "frog".
20. Queen Elizabeth was really Shakespeare.

Although many people were put to death over the course of the Queen's reign, very few were actually beheaded. Beheadings were reserved for people of status, and hanging was the more common method of execution for the ordinary people, burning for religious dissidents. Elizabeth was always greatly troubled when required to sign a death warrant, and in the case of the Duke of Norfolk, the first nobleman to go to the block in the Queen's reign, she canceled the warrant twice.
23. Queen Elizabeth was superstitious and had an interest in the occult.

Queen Elizabeth, like most of the people of her time, was very superstitious, and believed in black magic. She was very interested in the works of John Dee, an astronomer and astrologer who delved into the occult. Once when a doll of the Queen was found in a field in London, pierced through the heart with a pin, Elizabeth was so afraid that she summoned John Dee to neutralize the death spell which, it was believed, had been cast upon her.
24. Sir Walter Raleigh laid his cloak before Elizabeth in the mud.

Surprisingly, this popular story is just apocryphal.
25. Queen Elizabeth rarely had a bath.

The Elizabethans considered baths to be a luxury, or to be taken as a health measure, not to be indulged in all that often. Elizabeth perhaps had a bath every few weeks, which by the standards of the day, was very frequent. She was very particular about personal hygiene, however, and would have no one or anything around her that smelled!
Source: Author lizzie2108 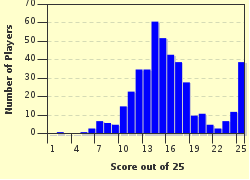