It's said we are all here for a reason. Anne's was to be the mother of the great Elizabeth I but was not given the chance to see it happen.

This marriage was solemnized in secret in 1533 due to the fact Henry was still married to Queen Katherine of Aragon. Anne was only to be queen for 1,000 days.
2. When was the Lady Anne actually crowned Queen consort?

Although she was secretly married in January, it was not until the King appointed Thomas Cranmer as Archbishop of Canterbury that it was determined that Henry's and Katherine's marriage was really null and void. Also, at this time the Pope and the Cardinal Wolsey would not recognize the marriage of Henry and Anne.
3. When was Elizabeth, the future Queen of England, born?

So, married in January, crowned in June and a mother in September. Talk about stress ...! What a whirlwind of a year!
4. Which of these men was NOT arrested during the fall of Queen Anne from power?

Thomas Howard was Anne's uncle and history reports he read the court's finding at the accused trial of "guilty of adultery and plotting to kill Henry". George Boleyn and Lord Rochford are one and the same. Mark Smeaton was Anne's personal musician.
5. It has been stated in several publications that Anne had a sixth finger or an additional thumb.

It was never a proven fact and during this era to be deformed could have been taken as an indication of involvement with witchcraft. It may of course have been hostile propaganda - or a very minor abnormality exaggerated for any of a number of reasons.
6. There are various versions and spellings of Anne Boleyn's name. Which is generally used on contemporary portraits of her?

The original family name, Bullen, was often written Boleyn to make it look and sound less ordinary and more aristocratic. (Her family coat of arms includes bulls). Anna de Boullan is how she signed at least one letter to her father. The version Anna Bolina is, of course, latinized.
7. What evidence is there that King Henry was genuinely in love with the Lady Anne?

King Henry detested writing. However there are 17 letters to his beloved. They have been preserved.

There is disagreement about Anne's beauty. It was perhaps not of the greatest, but her skin colour was 'olive' and she had dark hair and large, dark and mysterious eyes - altogether a slightly exotic lady with a whiff of the 'femme fatale' about her.
8. What title did Henry VIII create in September 1532 for Anne?

Anne was made a marquess in her own right, a most ununusal distinction. The title of Duchess of Suffolk was at one time held by Henry's sister, Mary, although she was never known by this title during her lifetime due to her prior status as the queen of France.
9. How many children did Anne have that outlived her?

Poor Anne had miscarried once and had a stillborn child once by 1535. It was never determined if she was attempting to have her children too close together.
10. Anne was NOT involved with which of the following?


Answer: Assisting with the death of Queen Katherine

Anne might have thought about Catherine dying, but there is no evidence that she was involved with her death. It has been noted that Queen Anne was a very charitable to the poor; also, that the King only burned heretics before and after Anne's reign.
Source: Author Uteute 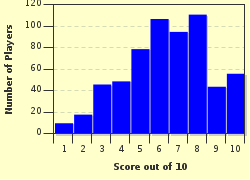 
Other Destinations
Explore Other Quizzes by Uteute