My favourite period in history was when the Tudors were on the throne. However this quiz is not about them. How much do you know about the Boleyn family?

Quiz Answer Key and Fun Facts
1. What was the name of the Boleyn who became queen in 1533?

A significant success of the Boleyn family, Anne became the King's favourite. However, this particular success was shortlived, as Henry, known for his impatience with wives, had her beheaded in 1536.
2. For which of these reasons was Anne Boleyn beheaded?

These charges are generally thought of as false accusations. Anne had several failed pregnancies and, despite giving Henry a daughter (who later became one of the most greatest monarchs in English history), she never bore Henry the male heir he wanted.

She was accused of 'bewitching' Henry with her charms and was thought to have been unable to conceive due to her 'evil' ways. She was also, unfortunately for her, very close to her sister and brother and was therefore accused of incest. Her brother George was also hanged for this crime but interestingly enough Mary, the other sister, was not accused of it and lived. Anne was also very popular at court and this led to the adultery charge. All the evidence against her was obtained under torture.
3. What was the name of the Boleyn family seat?

This one is fairly easy. Hampton Court was the seat of the Royal Family at the time, Hatfield House is where Elizabeth I apparantly heard she was to become Queen, and Windsor Castle is an official residence of Britain's current monarch, Queen Elizabeth II.
4. Which other wife of Henry VIII had strong family connections to the Boleyns?

The Howards were ever present at court but it wasn't until 1540 that Katherine Howard became the fifth wife of Henry VIII, seven years after her cousin Anne. Family tradition must have prevailed because she was also executed in 1542 for high treason.
5. Mary Boleyn (Anne's sister) also had an affair with Henry VIII.

Mary got there first! As she was married to William Carey, a gentleman of the court, and was a lady-in-waiting of the queen, the Boleyns decided that Mary would be an ideal pawn in their climb up the success ladder. Mary was encouraged to seduce the king while he was married to Katherine of Aragon and became his mistress. On 4th March 1536, Mary gave birth to a boy, Henry, who is widely believed to have been named after his father, Henry VIII.

However, Henry Senior never acknowledged this, possibly because at the time he was busy trying to divorce the queen to marry Anne. I doubt even Henry would acknowledge his parentage of a child by his fiancée's younger sister!
6. What was the name of the Boleyn brother?

George was the eldest surviving child and very close to his two little sisters. 'Henry' is obviously the name of the king ( and Mary's son), Thomas Boleyn was the father of the family and William was the name of Mary's husband.
7. Titles were an excellent sign of success for the Boleyns. The benefits of having Anne as queen were enormous. Already a well-established family at court, they became enobled several times over. What title did George Boleyn hold when he was executed with his sister?

The Boleyns all managed to gain impressive titles. Even the Careys were ennobled.
8. What was the name of Mary's daughter by William Carey?

After Anne and George's executions, the surviving Boleyns did not fare well. Thomas Boleyn died a year after and Elizabeth shortly after that. The remaining daughter, Mary, died in 1542 but was survived by a young daughter and the rumoured illegitimate son of Henry, both of whom became very popular at court. Catherine was rumoured to be one of her cousin, Queen Elizabeth's, best friends and Henry became Lord Hunsdon during her reign.
9. In which book, which was also made into a television play and a Hollywood movie, has the story of the Boleyns, particularly Mary, been immortalised?


Answer: The Other Boleyn Girl

I loved this book. It's what inspired me to create this quiz. The story of Mary living constantly in her sister's shadow is highly entertaining and offers a lot of information on the Boleyns as well as interesting theories that were never proved, such as that George Boleyn was a homosexual.
10. Which Boleyn became the sole ruler of England in 1558?

Looks like the Boleyns finally got what they wanted. The daughter of Henry VIII and Anne Boleyn was crowned in 1558 and ruled for forty-four years. A Boleyn became one of the greatest monarchs in British history.
Source: Author shortstef 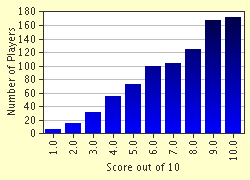 
Other Destinations
Explore Other Quizzes by shortstef