A short quiz on the infamous Boleyn family.

Quiz Answer Key and Fun Facts
1. Who were the three children of Thomas and Elizabeth Boleyn?

These children of Thomas and Elizabeth Boleyn changed the course of history. Anne Boleyn is famous for marrying Henry VIII, thus helping him set aside his wife of more than 20 years, Catherine of Aragon, and indirectly causing the break with Rome. Anne gave birth to the future Queen Elizabeth I, and was executed shortly after on trumped up charges of adultery, incest and treason.

Her brother George Boleyn was also executed for alleged incest with Anne, and their sister Mary Boleyn gave birth to Catherine Knollys and Henry Carey.
2. Which noble family was Elizabeth Boleyn a member of?

Elizabeth Boleyn was once Elizabeth Howard, sister of the Duke of Norfolk, who was head of the Howard family.
3. Which of Anne Boleyn's cousins also married Henry VIII?

Catherine Howard was Henry's fifth wife. She was executed at age 21 for treason and adultery, the same reason Anne was beheaded. Catherine married Henry when she was just 18.
4. Mary Boleyn married a commoner and became a farmer's wife after the death of her first husband.

Mary Boleyn was married first to Sir William Carey, and after he died of sweating sickness Mary married William Stafford, one of Henry VIII's pages. They later bought a small farm and lived there for the rest of their lives.
5. Which Boleyn children have unknown birthdates?


Answer: All have only estimated dates of birth

At the time it seems that exact birthdates were not considered very important.
6. Anne Boleyn's cousin who became Henry's mistress for a short time was Madge Shelton.

Madge's mother was also a member of Elizabeth I's nursery. Madge's real name was Margaret, and her family was closely related to the Howards, one of the most powerful families in England at that time.
7. Thomas Boleyn was ambassador to which country?

Thomas's son, George, was also an ambassador to France. This was a great honour, as the ambassador represented not only their King, but also the country.
8. Anne Boleyn was a lady-in-waiting to which of Henry's wives?

Catherine of Aragon was the daughter of Isabelle of Castille and Ferdinand of Aragon. Both Anne and Mary Boleyn waited on Queen Catherine, and Mary was very fond of her, but Anne and the Queen hated each other.
9. The Boleyns were descended from both a merchant and a king.

The Boleyn were distantly descended from Edward III. Most of the noble families in England were related, so most nobles had at least a tiny bit of royal blood in their veins. Thomas Boleyn was also related to a merchant who had sailed to England to sell his stock, and he never left.
10. George Boleyn married a woman who later gave evidence about him. What was this woman's name?

Jane Parker resented George Boleyn's closeness to his sisters and so she gave evidence against him which resulted in his death. Lady Parker came from a very wealthy family of whom she was the only heir, so her marriage with George Boleyn was thought to be very good. But the couple hated each other and were only together when they had to be.
Source: Author ditsygurl 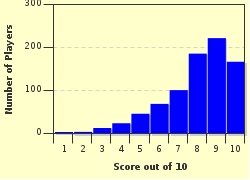 
Other Destinations
Explore Other Quizzes by ditsygurl