I am fascinated by British Royalty. I hope you share this interest. Enjoy!

Quiz Answer Key and Fun Facts
1. Which cousin of Elizabeth I did Robert Dudley marry?

Catherine died when Elizabeth was eight. Mary married three times (none to Dudley). Lady Jane Grey was executed with Guilford Dudley, Robert's brother.
2. Under which sovereign was Elizabeth (as Princess) sent to the Tower of London?

Edward loved Elizabeth too much to imprison her. Henry VII died in 1509, some twenty-four years before Elizabeth was born. Henry VIII claimed to love his daughters and did not imprison them.
3. Who helped to bring down Queen Anne Boleyn and later urged Henry to marry Queen Anne of Cleves?

Cromwell was one of the men who brought down Anne Boleyn by accusing her of adultery and incest. He of course helped to choose Anne of Cleves.
4. What year did the Spanish Armada set sail against England?

Elizabeth I began her reign in 1558. In 1570 Pope Pius V issued a bull declaring Elizabeth deposed! In 1600 she issued a charter to the East India Company [of London].
5. What year did Elizabeth I die?

Elizabeth was born in 1533 and died in 1603, just shy of her 70th birthday. However, no previous English sovereign had reached this age.
6. Which uncle did Edward VI have executed in 1549?

His uncle (Henry VIII's brother) Arthur died in 1502, 35 years before Edward was even thought of. Thomas Seymour was charged with trying to abduct Edward and marry him off to Lady Jane Grey. It was also alleged that he himself planned to marry Elizabeth (Edward's sister).
7. Who was the last king in the House of York?

Richard III, Head of the House of York, was killed in battle at Bosworth Field thus making Henry Tudor the King Henry VII. Richard I died in France. Richard II died of stavation.
8. Of Henry VIII's wives who was NOT a lady-in-waiting to a previous wife? 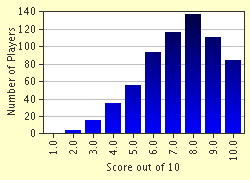