The Tudors of England Trivia Quiz

I hope you have fun with these questions about England's Tudor dynasty.

Quiz Answer Key and Fun Facts
1. Henry VII became King of England, founding the Tudor dynasty, when he defeated Richard III at what final battle of the Wars of the Roses?

Henry, a Lancastrian, cemented his claim to the throne by marrying Elizabeth of York, heiress to the House of York. She was the elder sister of the Princes in the Tower, who were murdered as children by parties unknown (but much speculated on).
2. Henry VIII had a little-remembered older brother, who married Catherine of Aragon and would have become king before him, had he not been a sickly youth and died in his teenage years. What was this brother's name?

They were both beheaded. So were various of their other relatives. There was just something about that Boleyn and Howard clan . . .
5. Henry VIII married Anne of Cleves (Wife Number Four) largely on the basis of a portrait Hans Holbein had painted of her. Sadly, however, Anne and Henry were not quite as impressed with each other when they met in real life. By what unflattering name did Henry reportedly refer to his bride?

According to legend, Holbein's portrait left out evidence of pockmarks on Anne's face, souvenirs of a bout of smallpox. There may have been other reasons for the bridal couple's disaffection; some argue that Henry may have been frustrated with her taste for garlic or her lack of education and erudition (a duke's daughter, her upbringing had centered on needlework). Or perhaps it was Anne who disliked Henry's looks; she may have set out to be as charmless as possible.

Their marriage ended, apparently unconsummated, seven months after it began. Anne lived in England for the rest of her life, supported in style by Henry.
6. Henry VIII's final wife (Number Six) survived him, despite frequent arguments on religion. After Henry's death she married a courtier, Thomas Seymour (later beheaded for conspiring against King Edward VI) and died giving birth to his daughter. Who was this Dowager Queen?

There's a story that at one point Henry actually made out a death warrant for Katherine Parr, but that a sympathetic Palace guard informed her of the plan and she was able to talk her way out of it. The daughter she bore Thomas Seymour -- first child for both of them -- survived the birth, but is lost to history.
7. After Henry VIII's death, his son -- still a child -- succeeded him. What was the son's name?

Edward VI was Jane Seymour's (wife number 3) son.
8. One of the very few lasting achievements of Henry's son's reign was a prayerbook for the Anglican Church. What was the name of this prayerbook?

The Psalter was a product of the Plymouth Bay Colony. The Book of Kells was an illuminated Roman Catholic manuscript, hidden for centuries in people's attics from royal soldiers who would have burned it. (Aren't religious wars a wonderful thing?) Another achievement of Edward's reign was the establishment of a number of grammar schools throughout England.
9. When Henry's son died, there was a brief plot by Lord Northumberland to lock both of Henry's daughters out of the succession by placing a cousin on the throne. What was the name of this girl, who reigned for nine days and was then imprisoned and beheaded by Mary?

Northumberland was executed too, as was Jane's husband Guilford Dudley. (Guilford's brother, Robert Dudley, survived to be an important man in Elizabeth's court.)
10. Mary I caused quite a stir not only because she was Catholic, but also because she married a man who would in a few months' time become Philip II of what nation, the on-again, off-again enemy of England?

This is the same Philip II who later sent the Great Armada against Mary's sister Elizabeth. At the time of his marriage to Mary (in 1555), he was king of Naples and of Sicily; he became king of Spain in January 1556 when his father, Holy Roman Emperor Charles V, abdicated.

Many thanks to deanovc, who kindly pointed out that Philip was not yet king of Spain at the time of his marriage to Mary.
11. One of the most terrible failures of Mary's reign was the loss of what French city, the last English foothold in France?

Mary mourned for Calais the rest of her life.
12. When Mary died, she was succeeded by her sister Elizabeth I, otherwise known as Good Queen Bess and other nicknames. What Crown colony, now a U.S. state, was named for her -- or, more accurately, for an aspect of her character?

She was the Virgin Queen - hence, Virginia.
13. The closest Elizabeth I ever got to marriage was with a French duke, brother of the King and son of Catherine de'Medici, with whom she actually contracted a marriage before things fell apart. What was he duke of?

His name was Francois, and he died about a year after the marriage fell through. Otherwise he would have succeeded to the throne of France.
14. In a stirring speech to her soldiers before the Spanish Armada was to land - and before the English had word the Armada had been defeated at sea -, Elizabeth I urged them to fight for their country to the last man. Said she, 'I know I have the body of a weak and feeble woman, but I have the heart and stomach of a _______________...' What word finishes the quote, according to the recollection of Leonel Sharp?

This was before the age of female empowerment, but she did a good enough job, don't you think?

We don't have any early drafts or notes from this speech, but the famous quotation comes from a letter that Leonel Sharp wrote to the Duke of Buckingham some three decades after the Queen's speech at Tilbury.
15. When she died childless in 1603, Elizabeth I left her throne to James of Scotland, son of Mary, Queen of Scots. Thus, the crown of England passed from the Tudor dynasty to what other dynasty?

The Bourbons reigned in France. The Hanovers reigned in Britain in the 18th and early 19th centuries, and the Windsors (formerly Saxe-Coburg-Gotha) reign in Britain now.
Source: Author CellarDoor 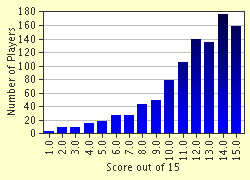