So you know that Henry VIII had six wives, but do you know the story of those wives and the rest of the Tudors? This quiz may prove difficult, but it full of intresting facts about some of England's most interesting figures.

Quiz Answer Key and Fun Facts
1. Who was the mother of the first Tudor, King Henry VII?

Margaret Beaufort was married to Edmund Tudor, the king's half- brother and bore his son Henry shortly after he died in battle.
2. Who was the wife of Henry VII?

Henry VII swore that if he defeated Richard III and became King he would marry Richard's niece Elizabeth of York (daughter of Elizabeth Woodville) to unite the Houses of York and Lancaster and end the long War of the Roses.
3. Henry VIII's sister Mary was married to the King of which country?

Mary Tudor was married twice. She first was forced by her brother Henry to marry the old King Louis of France, but swore the next time she married it would be to a man of her choice. Louis died three months after the marriage. Henry sent a group of courtiers to return his sister to England. Among them was Henry's friend Charles Brandon, Duke of Suffolk whom Mary married before returning to England.

Although in disgrace for a time, Henry forgave them and by marriage, Mary was now only a Duchess, she was always known as the French Queen.
4. What was the name of Henry VII's eldest son and the name of that son's wife?

Although Katherine had at least six known pregnancies, only one resulted in a child that lived for more than a few weeks.
6. What was the name of Henry's illegitimate son by Bessie Blount?

Fitzroy was the traditional way of saying 'son of a king.' The title the Duke of Richmond was created for him and he had a noble marriage. He died shortly after Anne Boleyn.
7. Who was the powerful churchman who was the sworn enemy of Anne Boleyn for his role in breaking up her marriage to Henry Percy? (This man also redesigned Hampton Court as a palace).

Cardinal Wolsey dominated English politics during the early part of Herny VIII's reign. The rise of Anne Bolyen spelled the fall of the Cardinal. After being sent from court in disgrace after failing to get Henry his divorce, he was arrested for treason but died before being returned to the king.
8. Who was his only wife to give Henry VIII a son that survived beyond infancy?

Jane Seymour ended up trading her life for the birth of her son. She died of childbirth fever less than two weeks after giving birth to Edward.
9. Which two wives of Henry VIII were executed for adultery?

Anne Boleyn and Katherine Howard were cousins, and both were executed for adultery. They are buried side by side. Anne fell out of the King's favor after giving birth to Elizabeth and then miscarrying the son she had promised. She was wrongly accused and convicted of having affairs with five men including her brother George.

She was executed by a special swordsman from France. Katherine Howard was the King's fifth wife and she was young and foolish. She was guilty of her crimes and also beheaded.
10. Which wife of Henry VIII was nearly executed for heresy?

Henry VIII, despite the breach with Rome, remained essentially Catholic in outlook. Before his breach with Rome he had written a book entitled 'In Defense of the Seven Sacred Sacrements' against Luther and the Protestants for which he was rewarded by the Pope with the title Defender of the Faith, which he kept for the rest of his life.

He broke away from Rome in 1533, when he was denied a divorce from Katherine of Aragon. He made himself head of the Church of England and granted himself his divorce.

He was excommunicated by the Pope. Although he was a heretic in the eyes of the rest of the world, he never saw it that that way. Katherine Parr, who was Protestant in outlook, was accused of heresy and saved herself only by groveling.
11. Who was the first Protector of the Realm during the reign of Edward Tudor?

Edward Seymour, Edward Tudor's uncle, was the first Protector of the Realm. He was followed by John Dudley. Thomas Seymour, also a brother of Jane, married Henry VIII's widow Katherine Parr the Dowager Queen. Both Thomas and Edward were executed during Edward Tudor's reign.
12. To whom was Elizabeth referring when she said, 'Today dies a man of much wit and very little judgment'?

Thomas Seymour had flirted a great deal with Elizabeth when they were both living in the house of the Dowager Queen. When the Queen died in childbirth, Thomas tried to marry Elizabeth without the approval of the Privy Council. This led to his death on the block.
13. Who was Queen of England for just nine short days?

Lady Jane Grey, The Nine Days Queen, was forced against her will to marry Gilford Dudley the son of John Duke of Northumberland and to become Queen of England. Mary raised an army to gain the throne she deserved and Jane, Gilford, and John were thrown in the Tower. All were later executed.
14. What was Mary Tudor's religious denomination?

Mary, like her mother Katherine of Aragon, was an ardent Roman Catholic. This caused many problems between Mary and her half-sister Elizabeth, who was a Protestant, like her mother Anne Boleyn.
15. What nickname did Mary Tudor receive?

Mary was a fanatical Catholic and had over 250 Protestants burned at the stake during her five-year reign.
16. Mary Tudor married Prince Phillip. What country was Phillip from?

Mary married Phillip of Spain who was the great nephew of her mother Katherine of Aragon. Phillip, like his wife, was a fanatical Catholic. The English people hated Phillip.
17. How many children did Phillip and Mary have?

Phillip and Mary had no children together. Mary had two false pregnancies: she believed that a child was growing inside of her, when actually it was a tumor that later caused her death.
18. When Elizabeth was placed in the Tower of London by her sister Queen Mary, she believed that she would never leave the place alive. She decided to make one request of Mary concerning her death. What was it?


Answer: To be beheaded by a swordsman from France like her mother Anne Boleyn

Elizabeth decided to make this wish after being taken through Traitor's Gate (the same gate her mother Anne Boleyn and Katherine Howard were taken through) from which very few people emerged alive. She was lodged in the same rooms as the ill-fated Lady Jane Grey.
19. Which possible lover of Elizabeth did she make Master of the Horse?

Elizabeth had known Robert Dudley since her childhood. They were imprisoned in the Tower at the same time, and although many historians believe they saw a great deal of each other in the Tower, this is doubtful. Later in Mary's reign, after they were both released, he sold off some of his land to pay her debts. Elizabeth gave him the honor of riding beside her to her Coronation.

She gave him rooms adjoining hers in the palace. They were very close all their lives and she kept his last letter by her bed where it was discovered when she died.
20. An ambassador once told Elizabeth, 'The reason you don't marry is because then you would only be Queen of England and this way you are __________ .' Please finish the quote.


Answer: both king and queen

Although Elizabeth had many marriage proposals during her reign, she refused them all, although she often pretended to consider them for a time. Many believe the reason she never married was because she did not wish to lose her power. Many say the reason lies in the memory of the tragic result marriage had brought to the wives of her father and the unhappy marriage of her sister.
21. Which U.S. state is named for a Tudor monarch?

It is named for the 'Virgin Queen', Elizabeth Tudor. Maryland was named for Henrietta Maria the wife of Charles I.
22. Which royal person did Elizabeth have put to death?

Mary Queen of Scots had fled to England following an uprising in Scotland. She was a potential rival claimant to the English throne and was held prisoner in England before being executed after a plot to assassinate Elizabeth was discovered.
23. Who allegedly said, 'It is a pity that Elizabeth and I cannot marry. Our children would have ruled the world'?

Sixtus V, who was Pope from 1585-1590, was quoted as saying this after the defeat of the Spanish Armada.
24. Who became King of England after Elizabeth died?

James was the son of Mary Queen of Scots whom Elizabeth had had put to death. He was Elizabeth's second cousin. This began the rule of the House of Stuart in England.
25. Which Tudor monarch had the longest reign?

All through his reign, Henry VIII had feared leaving England in the hands of a female monarch, but Elizabeth's reign was the longest, most peaceful and most prosperous of any of the Tudor monarchs.
Source: Author ChristinaCor 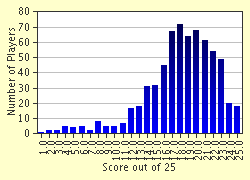 
Other Destinations
Explore Other Quizzes by ChristinaCor