This is my quiz on Queen Elizabeth I of England. It's pretty short, so hopefully it won't be too hard. Enjoy!

Quiz Answer Key and Fun Facts
1. Whom did Elizabeth succeed on the throne?

Mary was Elizabeth's half sister (her mother was Henry VIII's first wife). Edward became king in 1547 after his father died and Mary succeeded him in 1553.
2. Who was Elizabeth's mother?

Mary and Edward were the two who succeeded to the throne, and Elizabeth had another brother, Henry Fitzroy, who was the illegitimate son of Henry VIII. It is possible that there were other half-siblings whose royal parentage was never acknowledged.
4. Elizabeth's birthday was September 17, 1533.

She was born on September 7, 1533.
5. During Elizabeth's long reign, the first settlement in what is now the U.S. was established. What was its name?

Roanoke was established in 1587. Jamestown was founded in 1607 and Virginia became a royal settlement in 1624.
6. How was Elizabeth related to Mary, Queen of Scots?


Answer: they were cousins

He was the son of Mary, Queen of Scots, Elizabeth's cousin. By the way: James VII of Scotland was also James II of England (this was before it was known as the United Kingdom.) Oh, and I do hope no one put Elizabeth II... she's not THAT old, you know.
8. In what year was the Spanish Armada defeated?

9. William Shakespeare never had his plays performed for Elizabeth.

He started his playwriting career during her reign.
10. What church was established in England in 1559?

Though Henry VIII spoke out in defence of the Catholic church against the criticisms of Martin Luther, when it came to his "great matter", namely his wish to have his first marriage annulled, Henry fell out with Rome. The eventual outcome of the matter was that Henry separated from Rome and formed the Anglican Church, allowing him to marry Elizabeth's mother, Anne Boleyn.
11. Queen Elizabeth I had many favorites during her reign. In what year did her favorite of favorites die?

He was Robert, Earl of Leicester, who was already married. When Robert's wife died in 1560, it was thought by many that he killed her, thus making him unsuitable for the queen. Nonetheless, he was still her first love, and the one she had loved the most.
12. What state, in the U.S., is named for Elizabeth I?

She was nicknamed the Virgin Queen.
13. Elizabeth was the last ruler of the house of Tudor. Her successor was of what house?

14. Here's an easy one: Who was Elizabeth's grandfather?

Henry VIII was Elizabeth's father, Arthur was her uncle, and William was the first king of the house of Normandy.
15. Elizabeth I never married.

That's why she was called the Virgin Queen.
Source: Author jesselvr23 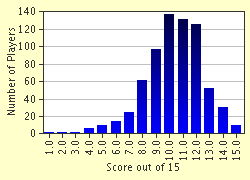 
Other Destinations
Explore Other Quizzes by jesselvr23