The Life and Times of King Henry VIII Quiz

This is a short quiz for those of you interested in the Life and Times of the great King: Henry VIII

Quiz Answer Key and Fun Facts
1. How many wives did Henry VIII have?

Of Henry VIII's wives two were beheaded, two were divorced, one died after giving birth to his only male heir and two outlived him. Henry maintained at the end of his life that only his marriages to Jane Seymour and Catherine Parr were legal.
2. When was Henry VIII born?

Henry VIII was the second eldest son to parents Henry VII and Elizabeth of York. He was destined for a life in the church until his elder brother Arthur died.
3. Who was Henry's favourite sister?

Mary was always Henry's favourite sister because they had so much in common. Henry was deeply shocked at her secret wedding to Charles Brandon in 1514 but he quickly forgave her.
4. Who were the maternal grandparents of Henry VIII?

Edward IV was one of England's greatest Kings and was noted for his great height which was quite rare in those days. He fell in love with the widow of a Lancastrian knight, Elizabeth Wydville, and they married much to the annoyance of the English Court. Edward IV never lived to see his famous grandson and Elizabeth Wydville died when Henry was a one year old.
5. His eldest daughter Mary fell from favour with Henry in the early 1530s for doing what?


Answer: Refusing to recognise her father as head of the Church of England

After being persuaded by Charles V, her cousin, Mary finally agreed to recognise her father as head of the English church (and that her father's marriage with her mother had been invalid). Mary came to deeply regret her actions.
6. In 1519 Henry had an affair with one of Katherine of Aragon's ladies in waiting Elizabeth Blount, this produced a son who Henry named ______ ?

Henry Fitzroy died in 1536 when he was seventeen. Many people including Henry VIII believed that Anne Boleyn (Henry's second wife) had poisoned him.
7. In the early 1540s Henry VIII launched a campaign against France. He won a province that was handed back to France under Edward VI. The province was ______ ?

The Protector, Edward Seymour who was Edward VI's maternal uncle, returned the land in the late 1540s as a way of restoring peace between the two nations.
8. The Tudor Dynasty which Henry VIII belonged to had five members. In what order did they proceed?

The Tudor Dynasty spanned 117-8 years starting with Henry VII in 1485 and ending with Elizabeth I in 1603.
9. Who ruled France at roughly the same time Henry ruled England (they were always trying to outdo each other in majesty, architecture and how big each of their legs were)?

Francis I and Henry VIII were two kings whose lives were intertwined with one another's. When Henry died in 1547 Francis coincidentally died only several weeks afterwards.
10. When did King Henry VIII die?

The cause of his death is still conjecture. Before his death he had grown quite large and had an annoying ulcer on his leg that was tended to by his sixth wife Catherine Parr.
Source: Author Jaffas85 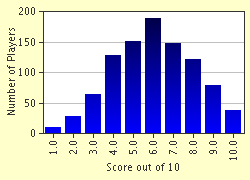