The Mistresses of Kings Trivia Quiz

This is my quiz on the mistresses of the Kings of France, England and Britain. I used the book "Sex With Kings: 500 Years of Adultery, Power, Rivalry and Revenge" by Eleanor Herman for my research. Enjoy!

Quiz Answer Key and Fun Facts
1. How long did the Marquise de Pompadour 'reign' as the mistress of King Louis XV?

Jeanne-Antoinette d'Etioles became King Louis XV's mistress in 1745 when she was twenty-four years of age. There she remained for nineteen years taking care of the king and France dying in great pain at the age of 43.
2. Who took over as Louis XV's mistress upon Pompadour's death?

Du Barry was known as a very upscale Parisian prostitute, and the King got her to become his mistress in 1768. She preferred jewelry and expensive gowns to collecting estates like Pompadour. After the King died of smallpox du Barry was rich from her time as mistress of Louis XV. Following the King's death du Barry was placed in a convent where she helped with chores, was never late for prayers and within weeks of her incarceration she wrapped the nuns around her finger.

In 1789 the Bastille fell, and during the Reign of Terror Louis XVI and du Barry were executed, along with thousands of others.
3. Who was Gabrielle d'Estrees mistress to?

Henry IV was known to have fifty-six mistresses. In addition to providing her royal lover with comforts, Gabrielle offered him fierce loyalty. She had three children by Henry and was expecting a fourth at the time of her expected wedding to the King. Then, four months before the child was to be born, Gabrielle went into labor, and both the child and Gabrielle died.
4. Which of King Charles II's mistresses did his queen hate most?

Queen Catherine of Braganza married Charles in Portsmouth but he spent the night not with Catherine but with Lady Castlemaine, whom Catherine already detested. Charles badgered her and sent away her friends until she accepted Castlemaine as 'First Lady of the Bedchamber'. Catherine accepted this eventually but still hated her.
5. Which of King Henry VIII of England's wives were NOT first his mistresses before he married them?

It was never proved that Eleanor murdered Rosamund, but there were all kinds of rumors about poisoning, stabbing and drowning.
7. Which king of France was Madame de Montespan mistress to?

Francoise-Athenais de Montespan was the mistress of King Louis XIV of France from 1667 till 1681. Her 'reign' as Maîtresse-en-titre ended in scandal when it was found out that Montespan used black magic (!) against Louis in order to keep him. He never ate or drank anything she offered again.
8. What was the name of King William IV of Great Britain's most remembered mistress?

Her given name was Dorothea Bland but she used Mrs. Jordan as a stage name and, together with William, she had ten illegitimate children. She already had four children prior to her relationship with William. She loaned William money, which never repaid. As soon as it became apparent William needed to marry he dumped her and married Princess Adelaide.
9. What do Diana Princess of Wales, Camilla Duchess of Cornwall and Sarah Duchess of York have in common?


Answer: They are descendants of Charles II

Jeanne Becu Comtesse du Barry began her career as a Parisian prostitute and quickly became King Louis XV's mistress. Marie-Antoinette the wife of Louis' grandson and heir hated her and never spoke to her. As the king lay on his deathbed he banished her from court so he could receive absolution without her presence.
Source: Author valjoedg 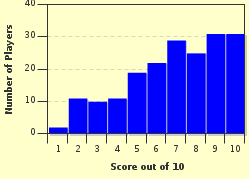