The Personality Behind the Painting Quiz

Ten well-known artists. The names are familiar, but can you pick the right man from the not-so-familiar clues?

Quiz Answer Key and Fun Facts
1. An epileptic, and the youngest of twenty children, this English artist and writer was mainly raised by his elder sister, Anne. Travelling widely in Italy and Greece he published his sketches in a series of travel books. Later, befriending his patron's grandchildren, he entertained them by writing amusing verse. Enough clues, who is he?

Born in London in 1812, and educated at home by Anne, who was 21 years his senior, Edward's first artistic income was from his bird illustrations at the age of 15. Although much admired during his lifetime for his artistic works, Lear is probably best now remembered for his nonsense verse and limericks.

He did, however, exhibit at the Royal Academy and give drawing lessons to Queen Victoria.
2. This artist was a founder member of the Pre-Raphaelite Brotherhood. In 1860 he married a milliner's assistant/artists' model, whom he referred to as Guggums, and was devastated by her death two years later from an overdose of laudanum. After this time he became something of a recluse, suffering a nervous breakdown, and seeing his work become increasingly morbid. Who was this disturbed man?

Born Gabriel Charles Dante Rossetti in London in 1828, the second child of a refugee Neapolitan poet, Rossetti was also an accomplished poet himself. Some of his poems he had buried with his wife, Lizzie, which he later regretted and had her exhumed so that he could recover them.

The story goes that when the casket was opened Lizzie's body was perfectly preserved, and her hair had grown to totally fill the coffin. Rossetti also had an eccentric collection of pets, including opossum, armadillo, zebra and racoon and had expressed a desire to acquire an elephant to teach the art of washing windows! After his wife's death he famously became involved with Jane, the wife of his friend William Morris.
3. Much inter-marrying took place in this aristocratic artist's family; his parents being first cousins, and his mother's brother marrying his father's sister. Not a fan of landscape painting he once declared "The painter who paints purely landscape is a villain." Who was this short short-sighted man?

Henri Marie-Raymond de Toulouse-Lautrec-Monfa was born near Toulouse in 1864. Under five feet tall, he lisped due to an over-large tongue, wore pince-nez spectacles, and a hat, whether indoors or out. Particularly well-known for his 'Moulin Rouge' series of posters, his work was influenced by the flatness of Japanese woodcuts.

He suffered a stroke and died at his mother's home at the age of 36. His father drove the hearse at his funeral.
4. The son of a Protestant pastor, this prolific artist was mentally unstable, moody and difficult. Supported by his younger brother, to whom he wrote "I cannot help it that my paintings do not sell. The day will come when people will see that they are worth more than the price of the paint". He is said to have shot himself at the scene of his final painting, dying in his devoted brother's arms two days later. Who was this deeply unhappy man?

Van Gogh never married, but had several unhappy love affairs, one of which was with his cousin. Whilst suffering from depresssion, and following an argument with Gauguin, he famously sliced off part of his left earlobe, which he then presented to a prostitute by the name of Rachel in a local brothel!
5. A famous wit, this American artist spent part of his childhood in Russia whilst his father, an engineer, worked on the Czar's railway project. He later moved to Paris and subsequently settled in London, where he became President of the Royal Society of British Artists. Who was the man who used a butterfly emblem as his signature?

James Abbott McNeill Whistler was born in Massachusetts in 1834, and educated at West Point Military Academy. His style of painting was not appreciated by the art critic John Ruskin, who accused him of "Flinging a pot of paint in the public's face." The ensuing lawsuit, in which Whistler sued for libel, ruined him financially following his award of a mere one farthing in damages.
6. Outspoken and aggressive, this London-born English artist was highly committed to social reform, highlighting the moral issues of the day in his satirical engravings and paintings. Who was this author of 'The Analysis of Beauty'?

The son of a teacher, Hogarth was born in 1697, and by his early twenties had set up his own engraving business. Finding that cheap copies of his work were being sold, he campaigned for a law to prevent plagiarism, resulting in the passing of the 'Copyright Act' (otherwise known as 'Hogarth's Act') in 1735.
7. Often painting his subjects from an elevated viewpoint, this artist preferred working outside. Regarded as one of the founders of Impressionism (the movement that took its name from his painting 'Impression: Soleil Levant'), he exhibited three paintings at the Paris World Fair in 1899. Who was this pipe-smoking Frenchman?

Born in Paris in 1840, Monet abandoned his compulsory military service in North Africa due to ill health. He joined Renoir and Sisley at the Paris studio of Charles Gleyre in 1862, although it was not until the mid 1870s, when his painting appeared at the first Impressionist exhibition, that his work gained any recognition and his finances finally improved.
8. The illegitimate son of a notary and a peasant girl, this Italian artist was described as "striking and handsome". As well as being a very strong and muscular athlete, he was a brilliant scientist, engineer and inventor. Who was this all-round genius?

A kind and generous man, Leonardo would provide all his friends with food and shelter. A confirmed vegetarian, he was also an animal lover and would buy caged birds in order to release them. In 1516 he was given an annual allowance by Francis I, together with the use of a château near Amboise, where he died in the king's arms three years later.
9. Famous for his uncompromising and unflattering portraits, this chocolate loving Spanish artist was also an accomplished etcher, and taught himself the art of lithography. He lost his hearing at the age of 47 after contracting meningitis, but went on to become First Court Painter six years later. Having spent the final four years of his life in France, he was buried in Bordeaux for 66 years, before his body (minus the skull) was moved to Madrid. Enough clues, who was he?

Francisco José Goya was born, the son of a master gilder, near Saragossa in 1746. At the age of 14 he was apprenticed to a former Spanish Court painter and enrolled in Madrid's San Fernando Academy. Allowed to continue painting during the French invasion of Spain, and the recipient of a French decoration, he was subsequently investigated by the Spanish authorities.

He was found not guilty of collaboration and reinstated as First Court Painter.
10. A poorly educated man, this British painter struggled just to write a sentence. His first watercolour, entitled 'The Archbishop's Palace, Lambeth', was exhibited at London's Royal Academy when he just 15 years old. Six years later, after the showing of his first oil painting, his name was made. What was it?

The eldest son of a barber and wig-maker, Joseph Mallord William Turner was born in London in 1775. His mother died insane when he was ten, after which time he lived with his uncle, a butcher in Brentford. He never married, but was reputed to have fathered at least five illegitimate children. He died of what his doctor referred to as "natural decay" in 1851 at the age of 76.
Source: Author fringe 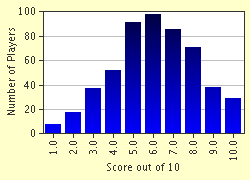