When you study Art History in college, your professors may not tell you about some of the more interesting events in the lives of artists. See how much you know about these tidbits that would liven up any Art History survey!

Share on Facebook
Share on Twitter
Share by E-Mail
Author
lanfranco
Time
6 mins
Type
Multiple Choice
Quiz #
202,036
Updated
Dec 03 21
# Qns
15
Difficulty
Difficult
Avg Score
8 / 15
Plays
1561
Awards
Top 5% quiz!
This quiz has 2 formats: you can play it as a or as shown below.
Scroll down to the bottom for the answer key.

The young Salai (real name: Gian Giacomo Caprotti), began working for Leonardo as a 10-year-old apprentice. He turned out to be larcenous, gluttonous, and an all-around irritation. But he must have had something going for him (some people think they know what), because Leonardo eventually bequeathed him a vineyard and several important paintings. Salai evidently annoyed at least one other person: he was murdered in 1525.
2. The purported mistress of Raphael (1483-1520) is said to have posed for some of his most famous paintings. What did her father do for a living?


Answer: He was a baker

The real name of the "Fornarina" ("baker girl") may have been Margherita Luti. She was possibly the model for one of the most beautiful of Renaissance Virgins, "The Sistine Madonna," and for the "Madonna della Sedia" as well. A "Portrait of a Woman in a Veil" ("La Velata"), in the Pitti Palace in Florence, also seems to depict this woman. (In my opinion, "La Fornarina," in the National Gallery in Rome, is not a portrait of the same subject and may have been at least partially painted by another artist.) According to artist/biographer Giorgio Vasari, Raphael indirectly died of having too much sex with Margherita.

In reality, the story of the painter and the baker's daughter is an undocumented, if romantic, art-historical tradition.
3. Raphael's former assistant Giulio Romano (1499?-1546), a successful artist and architect in his own right, got into trouble for what?

Around 1524, Giulio drew pictures of sixteen creative sexual positions on a wall at the Vatican. They were destroyed but recorded in engravings. Giulio had to hotfoot it to Mantua, where he worked for the Gonzaga family at the Palazzo del Te. In this century, Giulio's titillating little project inspired the novel, "The Sixteen Pleasures," by Robert Hellenga.

Other Italian artists involved in pornographic activities include Agostino Carracci and Rosso Fiorentino. Even Michelangelo got into trouble when the nudes in his "Last Judgement" in the Sistine Chapel were unveiled.

In other words, controversies over sexually-suggestive art are nothing new.
4. The busy Michelangelo Buonarroti (1475-1564) is well known as a painter, sculptor, and architect. What other artistic activity did he pursue in his limited spare time?

Michelangelo's poetry, often written in Petrarchan sonnet form, sometimes expressed the conflict between his intense devotion to God and less-pious emotions, such as his attraction to certain men. However, there is no documentary evidence that these relationships, or his famous friendship with Vittoria Colonna, to whom Michelangelo wrote several of his poems, ever went beyond platonic regard and admiration.

But who knows?
5. Egocentric Florentine sculptor and jeweler Benvenuto Cellini (1500-1571) boasted of his military experience. In what event did he claim to have played a soldier's role?


Answer: The Sack of Rome

According to Cellini, he acted as a gunner for papal forces during the Sack of Rome by troops of the Holy Roman Empire in 1527. His description of the Sack, in his "Autobiography," is a classic. Cellini also claimed to have committed a few murders, for which he said that the Pope had pardoned him. Cellini's best-known works are the "Perseus" in Florence and the elegant gold saltcellar, made for French king Francis I and stolen from the Kunsthistorisches Museum in Vienna in 2003 but recovered, after being held for ransom, in January of 2006.
6. Italian artist Ludovico Cigoli (1559-1613) was fascinated by a rapidly-developing field of 17th-century science and referred to it in a fresco. What was it?

Cigoli, more or less a very early Baroque painter and something of an intellectual, was a close friend of Galileo Galilei. His "Immaculate Conception," in the Cappella Paolina in Rome's Santa Maria Maggiore, includes the first accurately-painted moonscape, as seen through Galileo's telescope.
7. The artist Caravaggio (1573-1610) had to flee Rome after he killed a man during an argument. What were they fighting about?


Answer: A bet on a tennis match

The pugnacious Caravaggio (real name: Michelangelo Merisi) was constantly in trouble. He ended up in Roman police records for such exciting activities as throwing stones, insulting an officer, illegally possessing arms, assaulting a notary, and throwing artichokes at a waiter.

His landlady seized his furniture for non-payment of rent. After killing Ranuccio Tommassoni in 1606, Caravaggio left Rome and never returned -- probably to the great relief of many, if not the more sophisticated art lovers.
8. Flemish artist Peter Paul Rubens (1577-1640) had another career. What did he do besides paint?


Answer: Acted as a diplomat

The intelligent and urbane Rubens, one of the most successful artists in history, traveled frequently in the course of his work and was commissioned by the Spanish Hapsburgs to undertake missions as a diplomat and foreign agent. Rubens also enjoyed two quite happy marriages, the second, when he was 53, to a 16-year-old -- the subject of his lusciously-intimate painting, "Helene Fourment in a Fur Wrap," in Vienna.
9. Highly-original Baroque architect Francesco Borromini died how?


Answer: He stabbed himself with a sword

Neurotically-sensitive, and possibly suffering from a physical illess as well, Borromini stabbed himself in a frenzy in the early morning hours of August 2, 1667. Inexperienced with swords, he made a hash of his suicide and lingered for a day and a night -- rather unpleasantly. Borromini's other great works in Rome include San Carlo Alle Quattro Fontane, Sant'Agnese in Piazza Navona (with others), The Oratorio di San Filippo Neri, and the Propaganda Fide.

Incidentally, Borromini got into trouble when he ordered his workmen to beat a man who had vandalized the fabric of Sant'Ivo, then under construction.

They went too far and killed him.
10. French artist Rosa Bonheur (1822-1899) was notorious for some unusual behavior. What did she like to do?

Bonheur, best-known for lively paintings of horses, did prefer to dress as a man (and to smoke cigars). She had a female lover, who wrote a memoir of their lives together, and it's not beyond the realm of possibility that she made passes at a few teenage girls as well.
11. The great artist of the ballet and the racetrack, Edgar Degas (1834-1917), had an unusual background for an artist. What was it?


Answer: His family were wealthy bankers

Edgar Hilaire Germain de Gas was the son of an upper-class Parisian banker, originally from Italy. Interested in the arts, Edgar's parents gave him a solid classical education, which helped establish his lifelong interest in literature as well as in painting, printmaking, and sculpture.

He also studied law. Degas did have relatives who were cotton (not silk) merchants, a fact that inspired his unusual painting of 1873, "The Cotton Exchange in New Orleans."
12. In 1878, James Whistler (1834-1903) sued art critic John Ruskin (1819-1900) for publishing libelous remarks about him and his painting, "Nocturne in Black and Gold: The Falling Rocket," and won. How much did the jury award him?

Just about the smallest award they could have made. The jury, constrained by strict British libel laws, had to conclude that Ruskin, a lover of the Gothic and early-Renaissance styles, was technically guilty. (He had called Whistler a "coxcomb," meaning "foolish and conceited," and accused him of throwing "a pot of paint in the public's face.") However, their own views of Whistler weren't any better than the critic's.

They expressed their opinion via the damages, and Whistler was bankrupted by the suit. Ruskin actually wasn't that much of a traditionalist.

He was the great champion of the innovative English painter, J.M.W. Turner.
13. In 1848, John Ruskin married a woman named Euphemia (Effie) Gray, who successfully sought an annulment six years later. On what grounds did she claim that her marriage was invalid?


Answer: He refused to have sex with her

Ruskin, apparently appalled by the sight of a mature woman's naked body on his wedding night, couldn't bring himself to consummate the marriage -- ever. Effie went on to enjoy a happy marriage to the painter John Everett Millais (1829-1896), while Ruskin himself fell in love with a 10-year-old girl. One theory is that the naive Ruskin had always expected women's bodies to resemble classical statuary -- that is, to be utterly smooth and without pubic hair.

Another is that he was simply a pedophile.


Answer: An employee killed his mistress and several guests

Wright fell in love with Mamah Cheney, wife of a client. While her husband agreed to a divorce, Wright's wife was not so accommodating. Hoping to marry Wright, Mamah acted as his hostess at Taliesin, his estate in Spring Green, Wisconsin. On August 14, 1914, at lunchtime, an employee whom Mamah had just fired, locked all the doors but one, set fire to the house, armed himself with an ax, and attacked people as they fled. Seven died, including Mamah and her two children. Wright, who had been in Chicago at the time of the massacre, went on to rebuild Taliesin and to marry twice more. (As far as earthquakes are concerned, Wright's Imperial Hotel in Tokyo was one of the very few buildings to survive that city's great quake of 1923.)
15. Site artist Christo (b. 1935) was inadvertently responsible for someone's death. What happened?


Answer: A woman was crushed by part of the "Umbrellas" project

In 1991, Christo and his team set up over 3,000 blue and yellow umbrellas in two valleys -- one in California and one in Japan. During the display, one of the California umbrellas was dislodged by high winds and killed a tourist. (On the Japanese site, a workman was electrocuted, but not by an umbrella.) A recent Christo project was the temporary erection of 7,500 saffron-colored "Gates" in New York's Central Park.
Source: Author lanfranco

This quiz was reviewed by FunTrivia editor fringe before going online.
Any errors found in FunTrivia content are routinely corrected through our feedback system.
Most Recent Scores
Jan 27 2023 : agentofchaos: 15/15
Jan 17 2023 : BDaven64: 5/15 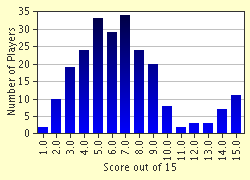 Related Quizzes
1. What Is the Painter's Name? Easier
2. The Personality Behind the Painting Tough
3. Who Painted This? Average
4. How Do I Look? Average
5. People In Art And Fashion Average
6. Artists Tough
7. The Eccentric Artist Average
8. Interesting 'A' People of Art Tough
9. Pictures of People Taking Pictures Average
10. Artistic Couples Difficult
11. Famous Photographers of History Tough
12. They Created Food For the Soul Average


Other Destinations
Explore Other Quizzes by lanfranco