Women In The Lives of Artists Trivia Quiz

"En toute chose cherchez la femme d'abord". - Always first look for "the woman behind the artist". This quiz is about the wives and the women in the lives of painters and musicians.

Quiz Answer Key and Fun Facts
1. Which of these was one of the women in Wagner's life?

Richard Wilhelm Wagner was born in 1813 at Leipzig. He died in Venice in 1883. His first wife was Wilhelmina (Minna) Planer. He then fell in love with Mathilda Wesendonck, the wife of a rich patron of his. As this was an impossible love, Wagner left the town where she lived (Zürich), but soon got entangled into a new affair.

He fell in love with and later married Cosima Liszt, the wife of a friend of his, the conductor Hans von Bülow. Cosima herself was Franz Liszt's daughter. Constance Weber was Mozart's wife. Louise Labé is a 16th century French poetess. Christa Ludwig is a German mezzo-soprano singer.
2. Which of these women played a major role in Rembrandt's life and in his art?

Rembrandt married Saskia Uylenburgh on June 22nd, 1634. She was the daughter of the burgomaster of Leeuwarden. In 1641 she gave him a son Titus. A year later she died. For some time Rembrandt had an affair with Geertghe Dircx, the nurse of his baby son.

His later years he shared with Hendrickje Stoffels, who bore him a daughter, Cornelia. Cléo de Merode was a Belgian dancer (1875-1966) who in 1896 was awarded the title of "most beautiful woman in the world" before such celebrities as Sarah Bernardt and "la Belle Otero".

The 18th century woman author Isabelle van Zuylen lived in Switzerland, but was born in the Netherlands.
3. Which of these women was adored by Michelangelo, who also wrote sonnets for her?

Silvana Mangano and Anna Magnani all were Italian movie-stars. Clara Petacci was Benito Mussolini's mistress and was put to death with him.
Vittoria Colonna, wife of the Marchese di Pescara, had a platonic relationship with Michelangelo. She herself wrote poetry too.(Marino 1492- Rome 1547)
4. Which of these women not only became Peter Paul Rubens' second wife, but was also the model for some of his best paintings?

Anna Seghers (1900-1983) became the President of the Writers' Union of the German Democratic Republic.
Hélčne Fourment (Antwerp 1614- Brussels 1673) was Rubens' second wife. Her father was a tapestry-merchant.
Rubens' first wife had been Isabella Brandt.
5. Which of these women was a major character in Frédéric Chopin's emotional life, but was not allowed to marry him by her parents because of the artist's feeble health?

Marie Wodzinska (Warszaw 1819-1896). Chopin wrote the Farewell Waltz for her. Opus 69, nr 1. Marie Pleyel (1811-1875) was a Paris-born Belgian pianist. The French poet Gérard de Nerval fell in love with her.
Mary Vetsera was born in Vienna (1871) and died at Mayerling in 1889.
She had become the mistress of Prince Rodolphe of Austria. Their suicide shocked the world.
Gabrielle d'Estrées(1571-1599) was the mistress of Henry IV of France.
6. With which of these women did Frédéric Chopin have a famous affair?

Amandine Aurore Lucie Dupin, baroness Dudevant, is better known as George Sand.
Lili Schönemann was the daughter of a Frankfurt banker. Goethe fell in love with her in 1774. When she insisted he gave up his romantic poet's existence, there followed a rupture.
Madeleine Scudéry was a 17th century French authoress.
Agnes Sorel(1422-1450) was the mistress of French King Charles VII. She is famous because of the portrait Jean Fouquet made of her in his "Our Lady and Child" painting.
7. Berthe Morisot, the French impressionist painter, was on good terms with various painters. Which of them did she become the sister-in-law of?

At age 22, Frida Kahlo (Mexico, 1907-1954) married Diego Rivera who was 20 years older than she. In 1938 Kahlo, who was crippled after a car accident, got the visit of André Breton the "Pope of Surrealism". Kahlo immediately fell in love with Breton's companion, the Russian exile Leon Trotsky.
Elsa Triolet aka Elsa Brick(1896-1970) was a Frenchwoman of Russian origin. She was the sister-in-law of the Russian poet Mayakovsky and became the wife of the French communist poet Louis Aragon.
Mary Cassatt (1844-1926), Pittsburgh-born American painter. Died at Le Mesnil-Théribus,Oise, in France, 1926. She was in touch with such painters as Manet, Courbet, Renoir and Degas.
Anna Pavlovna Pavlova, Russian dancer. Was born in 1881 at St. Petersburgh. Died of sudden pleurisy in the Netherlands at Den Haag in 1931. Famous for her version of the Dying Swan.
10. In whose life were all of these either mistresses or wives: Fernande Olivier, Marcelle Humbert (Eva), Olga Koklova, Marie Thérčse Walter( gave him a daughter Maya), Dora Maar, Françoise Gilot and Jacqueline Roque?

This quiz was reviewed by FunTrivia editor thejazzkickazz before going online.
Any errors found in FunTrivia content are routinely corrected through our feedback system.
Most Recent Scores
Jan 21 2023 : agentofchaos: 10/10
Jan 01 2023 : Barbarini: 10/10 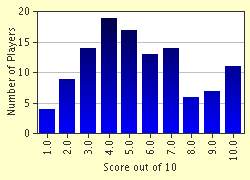 Related Quizzes
1. What Is the Painter's Name? Easier
2. The Personality Behind the Painting Tough
3. Who Painted This? Average
4. How Do I Look? Average
5. People In Art And Fashion Average
6. Artists Tough
7. The Eccentric Artist Average
8. Interesting 'A' People of Art Tough
9. Art History Behind The Scenes Difficult
10. Pictures of People Taking Pictures Average
11. Artistic Couples Difficult
12. Famous Photographers of History Tough