These are just very simple Bible questions. Nothing too hard. Have fun and I hope you learn something.

Quiz Answer Key and Fun Facts
1. What is the very first book in the Old Testament?

The first book is the one that talks about Adam and Eve. There are still some today who debate on who's really at fault for Adam eating that fruit. The result, nonetheless, led them to getting kicked out of Eden, amongst other punishments.
2. How many books have the name of John (just named for him, not necessarily written by)?

Yes, there are four of them: 1 John, 2 John, 3 John and of course the Gospel of John. 1, 2, 3 John are not very long. There are also some that have been written by him but are not given his name, like Revelation.
3. In the book of Matthew, there is a list of people and who their fathers were. According to Matthew, who is Joseph's (Jesus' father) father?

Yes, this is true. Although there are different points in each of the four books, they all tell about the same time period. It is kind of neat to see things from a different view. It just goes to show you that we all see things differently. In some Bibles they are called the gospel according to Matthew, Mark, Luke, and John. Today when we take something as gospel that is like saying that is the honest truth. So all four were giving their honest truth about what it is they saw.

The first three gospels are known as the synoptic gospels. St John's gospel is telling the same story, but is written in a different style.
5. There are two books in the Protestant Bible named for women, but as you read through, which once comes first?

Judith and Susanna can be found in Catholic Bibles.
6. The Old Testament Apocrypha include several books and passages not found in many versions of the Bible. Of the books found only in the Apocrypha, how many are named for women?

There is just one, the Book of Judith. The apocrypha also include an extra passage for the Book of Daniel -- the story of Susanna -- which is not a book, as well as extra passages for the Book of Esther. For you who do not know about the Apocrypha, it is a set of additional books in some versions of the Bible (recognized by some denominations but not by others), which I was not aware of.

The good quiz editor gave me the heads up on this one. So I hope that this question was not too confusing for you.
7. Jude writes a letter to Christians everywhere in his book Jude. In this book, who does he say his brother is?

The lesson that Jude is trying to give in this letter is that there are people among them who are not as they seem. They are trying to say that once you have Christ in your life you can go on and do as you please without punishment. He reminds them of the people The Lord caused Moses to lead out of Egypt, then allowed to die in the desert, because they did not trust and obey Him.
8. The book of Titus is also a letter from someone to Titus. Who wrote it?

One interesting thing about Paul is that in his letters to Timothy he signs them, Paul, "Jesus Christ's missionary sent out by God". In the letter to Titus he signs his letter, "the slave of God and the messenger of Jesus Christ".
9. How many Bible books are named after Timothy?

He just has two. These two books are actually letters from Paul a missionary of Jesus Christ, to Timothy.
10. According to the book of Revelation, how many tribes of Israel are there?

There were 144,000 with the mark of Christ who were not to be harmed. 12,000 from each of the 12 tribes. The tribes were, Judah, Reuben, Gad, Asher, Naphtali, Manasseh, Simeon, Levi, Issachar, Zebulun, Joseph, and Benjamin.
Source: Author morrow 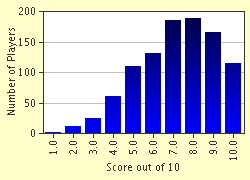 
Other Destinations
Explore Other Quizzes by morrow